One of the early backers of Musical.ly, the short video app that was acquired for $1 billion, is making a major bet that internet radio is one of the next big trends in media.

Goodwater Capital, one of a number of backers that won big when ByteDance acquired Musical.ly last year, has joined forces with Korean duo Softbank Ventures and KB Investment to invest $17 million into Korea’s Spoon Radio. The deal is a Series B for parent company Mykoon, which operates Spoon Radio and previously developed an unsuccessful smartphone battery sharing service.

That’s much like Musical.ly, which famously pivoted to a karaoke app after failing to build an education service.

“We decided to create a service, now known as Spoon Radio, that was inspired by what gave us hope when [previous venture] ‘Plugger’ failed to take off. We wanted to create a service that allowed people to truly connect and share their thoughts with others on everyday, real-life issues like the ups and downs of personal relationships, money, and work.

“Unlike Facebook and Instagram where people pretend to have perfect lives, we wanted to create an accessible space for people to find and interact with influencers that they could relate with on a real and personal level through an audio and pseudo-anonymous format,” Mykoon CEO Neil Choi told TechCrunch via email.

Choi started the company in 2013 with fellow co-founders Choi Hyuk jun and Hee-jae Lee, and today Spoon Radio operates much like an internet radio station.

Users can tune in to talk show or music DJs, and leave comments and make requests in real-time. The service also allows users to broadcast themselves and, like live-streaming, broadcasters — or DJs, as they are called — can monetize by receiving stickers and other virtual gifts from their audience.

Spoon Radio claims 2.5 million downloads and “tens of millions” of audio broadcasts uploaded each day. Most of that userbase is in Korea, but the company said it is seeing growth in markets like Japan, Indonesia and Vietnam. In response to that growth — which Choi said is over 1,000 percent year-on-year — this funding will be used to invest in expanding the service in Southeast Asia, the rest of Asia and beyond. 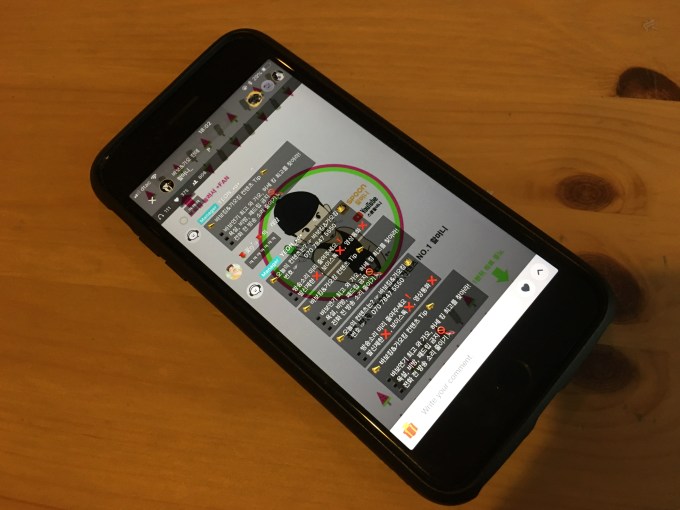 Singapore’s Bubble Motion raised close to $40 million from investors but it was sold in an underwhelming and undisclosed deal in 2014. Reportedly that was after the firm had failed to find a buyer and been ready to liquidate its assets. Altruist, the India-based mobile services company that bought Bubble Motion has done little to the service. Most changes have been bug fixes and the iOS app, for example, has not been updated for nearly a year.

Things have changed in the last four years, with smartphone growth surging across Asia and worldwide. That could mean different fortunes but there are also differences between the two in terms of strategy.

Bubbly was run like a social network — a ‘Twitter for voice’ — whereas Spoon Radio is focused on a consumption-based model that, as the name suggests, mirrors traditional radio.

“This is mobile consumer internet at its best,” Eric Kim, one of Goodwater Capital’s two founding partners, told TechCrunch in an interview. “Spoon Radio is taking an offline experience that exists in classic radio and making it even better.”

Kim admitted that when he first used the service he didn’t see the appeal — he claimed the same was true for Musical.ly — but he said he changed his tune after talking to listeners and using Spoon Radio. He said it reminded him of being a kid growing up in the U.S. and listening to radio shows avidly.

“It’s a really interesting phenomenon taking off in Asia because of smartphone growth and people being keen for content, but not always able to get video content. It was a net new behavior that we’d never seen before… Musical.ly was in the same bracket as net new content for the new generation, we’ve been paying attention to this category broadly,” Kim — whose firm’s other Korean investments include chat app giant Kakao and fintech startup Toss — explained.