Just a few weeks back, Valve moved into Discord’s turf a bit with a dramatic overhaul of Steam’s chat system.

Today, Discord is returning the favor by playing with the idea of selling games through its namesake chat platform.

The company says it’ll launch a beta of the game store later today, though it’ll initially be limited to a small slice of its user base (which now sits at 150 million users). More specifically, the beta will roll out to just 50,000 users from Canada at first.

It’ll be dabbling in game sales on two fronts: they’ll directly sell some games, while other games will be added perks for its Discord Nitro subscription service.

Whereas Valve has massively increased the number of games on Steam over the last few years by opening up to third parties through things like Steam Greenlight or (more recently) Steam Direct, Discord is pitching this as a more “curated” offering with a slimmer number of options. At least at first, they say they’re aiming for something that feels more like “one of those cozy neighborhood book shops” — which, on day one of the beta, translates to 11 games.

While 11 games may not seem like much, you can bet they’ll offer more than that in time. See that screenshot up top? You don’t dedicate an entire tab in some of your app’s most prime screen real estate unless you’re hoping to make it a key part of your business. 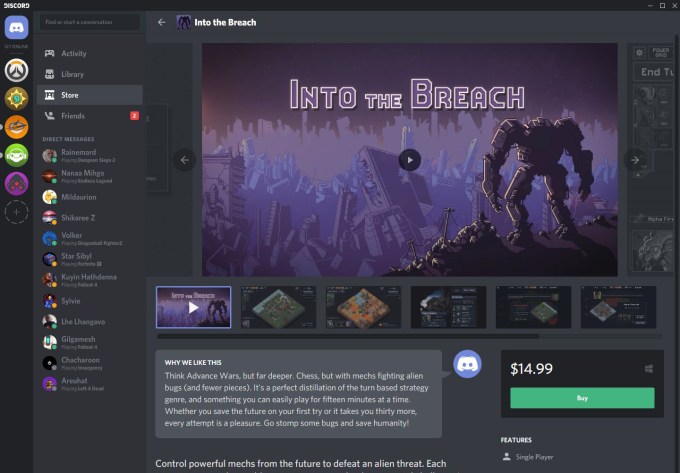 Taking things one more step forward, Discord is also getting into (temporary) exclusives — or, as it calls them, “First on Discord” games. While it doesn’t mention names and none will roll out with today’s beta, Discord says it’ll soon highlight select indie games that’ll be available only on Discord for the first 90 days-or-so after their respective launches.

Meanwhile, the company is also testing the idea of building up its premium subscription add-on, Discord Nitro, into a game subscription service. Whereas the $5-per-month service previously primarily got you a few mostly aesthetic perks like animated avatars, a special profile badge and bigger upload limits, the same 50,000 players mentioned above (or, at least, those on Windows) will get access to a rotating set of games.

While many of those games aren’t exactly new (some of them are 5+ years old), a lot of them are really great games (I’ve lost days to Super Meat Boy) that not everyone has gotten around to playing. It’s a solid way to pique people’s interest in giving Discord a bit of money each month if the GIFs and badges weren’t quite enough.

Oh, and for good measure, Discord is making itself a launcher — that is, you’ll be able to sort and launch most of the games on your computer right from Discord, including games purchased elsewhere and even those, notes the company, that require another launcher to run. If that’s not a shot across the bow in Steam’s direction, I’m not sure what is. 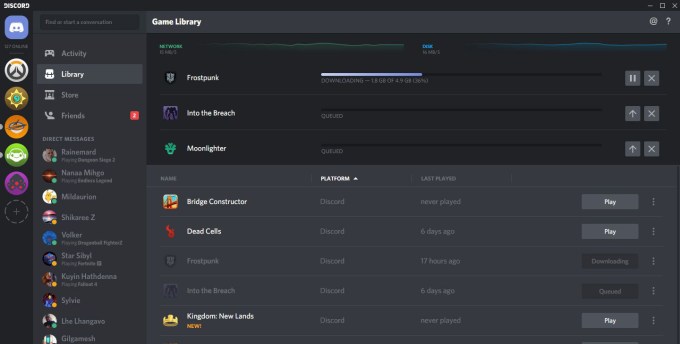