Analysis of open source information carried out by the investigative website Bellingcat suggests drones that had been repurposed as flying bombs were indeed used in an attack on the president of Venezuela this weekend.

The Venezuelan government claimed three days ago that an attempt had been made to assassinate President Nicolás Maduro using two drones loaded with explosives. The president had been giving a speech which was being broadcast live on television when the incident occurred.

Initial video from a state-owned television network showed the reaction of Maduro, those around him and a parade of soldiers at the event to what appeared to be two blasts somewhere off camera. But the footage did not include shots of any drones or explosions.

AP also reported that firefighters at scene had shed doubt on the drone attack claim — suggesting there had instead been a gas explosion in a nearby flat.

Since then more footage has emerged, including videos purporting to show a drone exploding and a drone tumbling alongside a building.

Bellingcat has carried out an analysis of publicly available information related to the attack, including syncing timings of the state broadcast of Maduro’s speech, and using frame-by-frame analysis combined with photos and satellite imagery of Caracas to try to pinpoint locations of additional footage that has emerged to determine whether the drone attack claim stands up.

The Venezuelan government has claimed the drones used were DJI Matrice 600s, each carrying approximately 1kg of C4 plastic explosive and, when detonated, capable of causing damage at a radius of around 50 meters. 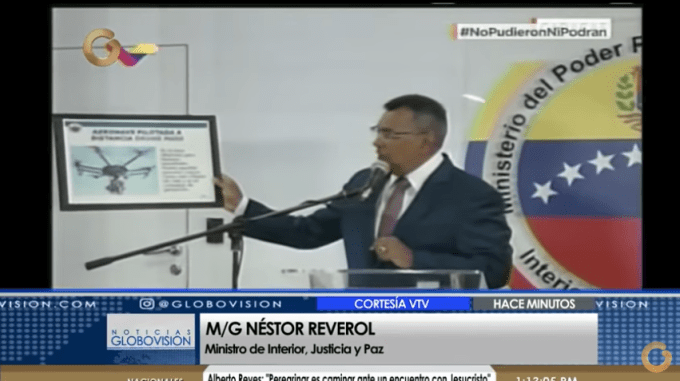 DJI Matrice 600 drones are a commercial model, normally used for industrial work — with a U.S. price tag of around $5,000 apiece, suggesting the attack could have cost little over $10k to carry out — with 1kg of plastic explosive available commercially (for demolition purposes) at a cost of around $30.

Bellingcat says its analysis supports the government’s claim that the drone model used was a DJI Matrice 600, noting that the drones involved in the event each had six rotors. It also points to a photo of drone wreckage which appears to show the distinctive silver rotor tip of the model, although it also notes the drones appear to have had their legs removed.

Venezuela’s interior minister, Nestor Reverol, also claimed the government thwarted the attack using “special techniques and [radio] signal inhibitors”, which “disoriented” the drone that detonated closest to the presidential stand — a capability Bellingcat notes the Venezuelan security services are reported to have.

The second drone was said by Reverol to have “lost control” and crashed into a nearby building.

Bellingcat says it is possible to geolocate the video of the falling drone to the same location as the fire in the apartment that firefighters had claimed was caused by a gas canister explosion. It adds that images taken of this location during the fire show a hole in the wall of the apartment in the vicinity of where the drone would have crashed.

“It is a very likely possibility that the downed drone subsequently detonated, creating the hole in the wall of this apartment, igniting a fire, and causing the sound of the second explosion which can be heard in Video 2 [of the state TV broadcast of Maduro’s speech],” it further suggests.

From the open sources of information available, it appears that an attack took place using two DBIEDs while Maduro was giving a speech. Both the drones appear visually similar to DJI Matrice 600s, with at least one displaying features that are consistent with this model. These drones appear to have been loaded with explosive and flown towards the parade.

It also considers the claim of attribution by a group on social media, calling itself “Soldados de Franelas” (aka ‘T-Shirt Soldiers’ — a reference to a technique used by protestors wrapping a t-shirt around their head to cover their face and protect their identity), suggesting it’s not clear from the group’s Twitter messages that they are “unequivocally claiming responsibility for the event”, owing to use of passive language, and to a claim that the drones were shot down by government snipers — which it says “does not appear to be supported by the open source information available”.