The number of tech platforms taking action against Alex Jones, the far right InfoWars conspiracy theorist and hate speech preacher, has been rising in recent weeks — with bans or partial bans including from Google, Apple and Facebook.

However, as we noted earlier, Twitter is not among them. Although it has banned known hate peddlers before.

Jones continues to be allowed a presence on Twitter’s platform — and is using his verified Twitter account to scream about being censored all over the mainstream place, hyperventilating at one point in the past 16 hours that ‘censoring Alex Jones is censoring everyone’ — because, and I quote, “we’re all Alex Jones now”.

(Fact check: No, we’re not… And, Alex, if you’re reading this, we suggest you take heart from the ideas in this Onion article and find a spot in your local park.)

We asked Twitter why it has not banned Jones outright, given that its own rules service proscribe hate speech and hateful conduct…

Abuse: You may not engage in the targeted harassment of someone, or incite other people to do so. We consider abusive behavior an attempt to harass, intimidate, or silence someone else’s voice.

Hateful conduct: You may not promote violence against, threaten, or harass other people on the basis of race, ethnicity, national origin, sexual orientation, gender, gender identity, religious affiliation, age, disability, or serious disease. Read more about our hateful conduct policy.

Add to that, CEO Jack Dorsey has made it his high profile mission of late to (try to) improve conversational health on the platform. So it seems fair to wonder how Twitter continuing to enable a peddler of toxic lies and hate is going to achieve that?

While Twitter would not provide a statement about Jones’ continued presence on its platform, a spokesman told us that InfoWars and Jones’ personal account are not in violation of Twitter (or Periscope’s) ToS. At least not yet. Though he pointed out it could of course take action in the future — i.e. if it’s made aware of particular tweets that violate its rules.

Twitter’s position therefore appears to be that the content posted by InfoWars to other social media platforms is different to the content Jones posts to Twitter itself — ergo, its (hedgy & fudgy) argument essentially boils down to saying Jones is walking a fine enough line on Twitter itself to avoid a ban, because he hasn’t literally tweeted content that violates the letter of Twitter’s ToS.

(Though he has tweeted stuff like “the censorship of Infowars just vindicates everything we’ve been saying” — and given the hate-filled, violently untruthful things he has been saying all over the Internet, he’s essentially re-packaged all those lies into that single tweet, so… )

To spell out Twitter’s fudge: The fact of Jones being a known conspiracy theorist and widely visible hate preacher is not being factored into its ToS enforcement decisions. (Which does appear to contradict one of Twitter’s own policy shifts, announced last year, to take into account off-platform behavior, as others have pointed out.)

The company says it’s judging the man by his output on Twitter — which means it’s failing to take into account the wider context around Jones’ tweets, i.e. all the lies and hate he peddles elsewhere (and indeed all the insinuating nods and dog whistles he makes to his followers on Twitter) — and by doing so it is in fact enabling the continued spread of hate via the wink-wink-nod-nod back door.

Twitter’s spokesman did not want to engage in a lengthy back and forth conversation, healthy or otherwise, about Jones/InfoWars so it was not possible to get a response from the company on that point.

However it does argue, i.e. in defense of its fudged position, that keeping purveyors of false news on its platform allows for an open, real-time debate which in turn allows for their lies to be challenged and debunked by people who are in their right minds — so, basically, this is the ‘fight bad speech with more speech argument’ that’s so beloved of people already enjoying powerful privilege.

The problem with that argument (actually, there are many) is it does not factor in the human cost; the people suffering directly because toxic lies impact their lives. Nor the cost to truth itself; To belief in the veracity and authenticity of credible sources of information which are under sustained and vicious attack by anti-truthers like Jones; The corrosive impact on professional journalism from lies being packaged and peddled under the lying banner of self-styled ‘truth journalism’ that Jones misappropriates. Nor the cost to society from hate speech whose very purpose is to rip up the social fabric and take down civic values — and, in the case of Jones’ particular bilious flavor, to further bang the drum of abuse via the medium of toxic disinformation — to further amplify and spread his pollution, via the power of untruth — to whip up masses of non-critically thinking conspiracy-prone followers. I could go on. (I have here.)

The amplification effect of social media platforms — combined with cynical tricks used by hate peddlers to game algorithms, such as bots retweeting and liking content to make it seem more popular than it is — makes this stuff a major, major problem.

‘Bad speech’ on such powerful platforms can become not just something to roll your eyes at and laughingly dismiss, but a toxic force that bullies, beats down and drowns out other types of speech — perhaps most especially truthful speech, because falsehood flies (and online it’s got rocket fuel) — and so can have a very deleterious impact on conversational health.

Really, it needs to be handled in a very different way. Which means Twitter’s position on Jones, and hateful anti-truthers in general, looks both flawed and weak.

Twitter’s spokesman also implied the company is working on tuning its systems to actively surface high quality counter-narratives and rebuttals to toxic BS — such as in replies to known purveyors of fake news like InfoWars.

But while such work is to be applauded, working on a fix also means you don’t actually have a fix yet. Meanwhile the lies you’re not stopping are spreading on your platform — at horrible and high cost to people and society.

It’s hard to see this as a defensible position.

And while Twitter keeps sitting on its fence, Jones’ hate speech and toxic lies, broadcast to millions as a weapon of violent disinformation, have got his video show booted from YouTube (which, after first issuing a strike yesterday then terminated his page for “violating YouTube’s Community Guidelines”).

The platform had removed ads from his channel back in March — but had not then (as Jones falsely claimed at the time) banned it. That decision took another almost half year for YouTube to arrive at.

Also yesterday, almost all of Jones’ podcasts were pulled by Apple, with the company saying it does not tolerate hate speech. “We believe in representing a wide range of views, so long as people are respectful to those with differing opinions,” it added.

Even Facebook removed a bunch of Jones’ videos late last month, for violating its community standards — albeit after some dithering, and what looked like a lot of internal confusion.

The social media behemoth also imposed a 30-day ban on Jones’ personal account for posting the videos, and served him a warning notice for the InfoWars Facebook Page he controls.

Facebook later clarified it had banned Jones’ personal profile because he had previously received a warning — whereas the InfoWars Page had not, hence the latter only getting a strike.

So, uh, other responses than Twitter’s (of doing nothing) are widely possible.

On Twitter, Jones also benefits from being able to distinguish his account from any would-be imitators or satirists, because he has a verified account — denoted on the platform by a blue check mark badge.

We asked Twitter why it hasn’t removed Jones’ blue badge — given that the company has, until relatively recently, been rethinking its verification program. And last year it actively removed blue badges from a number of white supremacists because it was worried it looked like it had been endorsing them. Yet Jones — who spins the gigantic lie of ‘white genocide’ — continues to keep his.

Twitter’s spokesman pointed us to this tweet last month from product lead, Kayvon Beykpour, who wrote that updating the program “isn’t a top priority for us right now”.

We've heard some questions recently about the status of Verification on Twitter, so wanted to address directly. Updating our verification program isn’t a top priority for us right now (election integrity is). Here’s some history & context, and how we plan to put it on our roadmap

Beykpour went on to explain that while Twitter had “paused” public verification last November (because “we wanted to address the issue that verifying the authenticity of an account was being conflated with endorsement”), it subsequently paused its own ‘pause for thought’ on having verified some very toxic individuals, with Beykpour writing in an email to staff in July:

Though the current state of Verification is definitely not ideal (opaque criteria and process, inconsistency in our procedures, external frustration from customers), I don’t believe we have the bandwidth to address this holistically (policy, process, product, and a plan around how & when these fit together) without coming at the cost of our other priorities and distracting the team.

At the same time Beykpour admits in the thread that Twitter has been ‘unpausing’ its pause on verification in some circumstances (“we still verify accounts ad hoc when we think it serves the public conversation & is in line with our policy”); but not, evidently, going so far as to unpause its pause on removing badges from hateful people who gain unjustified authenticity and authority from the perceived endorsement of Twitter verification — such as in ‘ad hoc’ situations where doing so might be terribly, terribly appropriate. Like, uh, this one.

Beykpour wrote that verification would be addressed by Twitter post-election. So it’s presumably sticking to its lack of having a policy at all right now, for now. (“I know this isn’t the most satisfying news, but I wanted to be transparent about our priorities,” he concluded.)

Twitter’s spokesman told us it doesn’t have anything further to share on verification at this point. 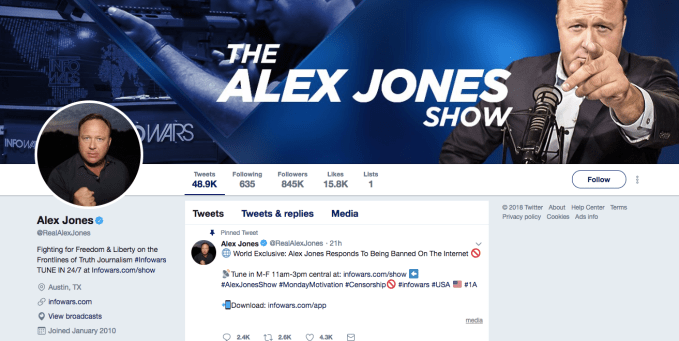 Jones’ toxic activity on social media has included spreading the horrendous lie that children who died in the Sandy Hook U.S. school shooting were ‘crisis actors’.

So, for now, a man who lies about the violent death of little children continues to be privileged with a badge on his not-at-all-banned Twitter account.

Two of the parents of a child who died at the school wrote an open letter to Facebook’s founder, Mark Zuckerberg, last month, describing how toxic lies about the school shooting spread via social media had metastasized into violent hate and threats directed at them.

“Our families are in danger as a direct result of the hundreds of thousands of people who see and believe the lies and hate speech, which you have decided should be protected,” wrote Lenny Pozner and Veronique De La Rosa, the parents of Noah, who died on 14 December, 2012, at the age of six.

“What makes the entire situation all the more horrific is that we have had to wage an almost inconceivable battle with Facebook to provide us with the most basic of protections to remove the most offensive and incendiary content.”