Apple appears to be working on another personalized playlist for Apple Music subscribers – this time, one that shows you what your friends are listening to on its service, as opposed to a personalized playlist filled with editorial or algorithmic recommendations. The new “Friends Mix” playlist includes 25 songs and is updated on Mondays, according users who have gained access to this new feature and screenshots of the playlist’s description.

News of the playlist was first spotted by a user on Reddit, then reported by 9to5Mac, AppleInsider and several others, as a result.

Apple has not yet formally announced the addition, and many other Apple Music subscribers are not seeing the playlist at this time.

Apple isn’t commenting, but we’ve learned that the “Friends Mix” is rolling out to Apple Music subscribers who are using a device with beta versions of iOS 12, macOS Mojave, or tvOS 12. It will become available to all Apple Music subscribers this September. (The exceptions will be China, Russia, and Turkey because creating a profile to share music with friends is also unavailable in these countries.)

According to the original poster on Reddit, the playlist appeared in their Apple Music app on a device that was running iOS 12 beta – this could indicate it’s something that won’t launch to the public until the general release of iOS 12 later this fall.

The tester also noted they had just installed the iOS 12 beta, which could explain why they saw it first.

We reached out to the tester, Brad, who confirmed he’s running iOS beta 6, dev build 16A5345f. He added that of the 25 songs on the Friends Mix, 7 were already in his library. But the playlist was largely music from the genres he listened to, with no weird additions.

This, we’ve also learned, is because the Friends Mix is customized to include only those songs that Apple Music thinks you’ll like, too. 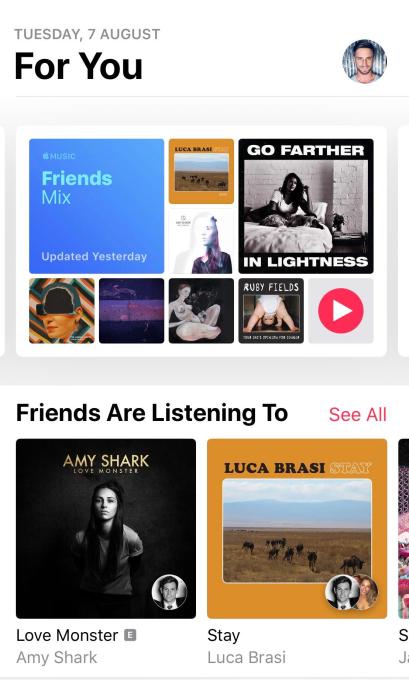 Personalized playlists are a key selling point for streaming music services, with Apple, Spotify, Amazon, Pandora, iHeartRadio and others all offering a variety of playlists for their subscribers. In Apple’s case, it already offers a handful of these, including “Favorites,” “New Music Mix,” and the latest addition, launched over a year ago, “Chill Mix.”

Above: More screenshots, including the playlist description: “A selection of songs based on what your friends have been listening to. Refreshed every Monday.”

However, the value of a playlist of your friends’ music is a little questionable.

Though social music was Spotify’s original aim, through integrations with Facebook and tools to find and follow others, it has stepped away from that in later years. Instead, it’s more focused now on making the service feel individualized to each user – after all, your friends could be listening to some awfully terrible stuff, Spotify realized.