China is rising in many ways — the economy, consumer spending and technology — but still many of its population looks overseas, and particularly to the West, for cues on lifestyle and health. That’s a theme that’s being seized by LemonBox, a China-U.S. startup that lets Chinese consumers buy U.S. health products at affordable prices.

Indeed, the recent scare around Chinese vaccinations, which saw faulty inoculations given to babies and toddlers in a number of provinces, has only fueled demand for overseas health products which LemonBox founder Derek Weng discovered himself when his father was diagnosed as having high blood sugar levels. Weng, then working in the U.S. for Walmart, was able to look up and buy the right medicine pills for his father and bring them back to China himself. He realized, however, that others are not so fortunate.

After polling friends and family, he set up an experimental WeChat app in 2016 that dispensed health information such as articles and information. Within a year, it had racked up 30,000 subscribers and given him the confidence to jump into the business fully.

Today, LemonBox allows Chinese consumers to buy its own-branded daily vitamin packs from the U.S.. Further down the line, the goal is to expand into more specific verticals, including mother and baby, beauty and daily supplements, according to Weng, who believes that the timing is good.

“For the first time in China, people are taking a major interest in health and are working out, while society is becoming more developed,” he told TechCrunch in an interview. “We estimate that Chinese consumers are investing 30 percent of their income in health.” 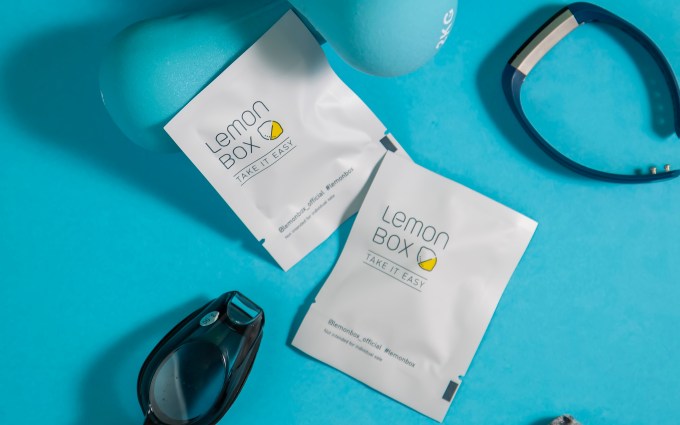 The LemonBox daily pack of vitamins.

Since its full launch three weeks ago, LemonBox has pulled in 700 customers with 40 percent purchasing a three-month bundle package and the remainder a monthly order, Weng said. Typical basket size is around 300 RMB, or nearly $45.

To get the business off the ground, Weng needed expert support and his co-founder Hang Xu — who is also LemonBox’s “Chief Nutrition Scientist” — has spent 10 years in the field of nutrition science. Xu holds a Ph.D. from Texas A&M University, is a U.S.-registered dietitian and has published over 10 research papers. The startup’s third co-founder, Eddy Meng (CMO), is a graduate of Chinese app store startup Wandoujia which sold to Alibaba two years ago.

Right now, LemonBox has offices in the U.S. and China and it is squarely focused on e-commerce but Weng said the company is looking to introduce other kinds of health services. That could include consultations with dietary experts and specific offerings for patients leaving a hospital or in other long-term care situations, as well as potentially own-label products.

“We look at Stitch Fix for inspiration,” Weng said. “Right now, it leverages data to develop its own in-house private label products that improve on margin and the accuracy of recommendations. This kind of data and further services will be the next stage for us.”

LemonBox raised a seed round in March, which included participation from Y Combinator, and as part of Y Combinator’s current program, it’ll present to prospective investors at the program’s demo day. Already, though, Weng said there’s been interest from investors which the company is thinking over.

Interestingly, it was fourth time lucky entering YC for Weng, who had before applied with previous startups unsuccessfully. This time it was entirely circumstantial. He applied to be in the audience for Y Combinator’s ‘Startup School’ event that took place in Beijing in May.

Unbeknownst to him, YC picked out a handful of attendees whose companies were of interest, and, after an interview that Weng didn’t realize was an audition, LemonBox was selected and fast-tracked into the organization’s latest program. In addition, YC joined the startup’s seed funding round which had initially closed in March.

That anecdotal evidence says much of YC’s effort to grab a larger slice of China’s startup ecosystem.

The organization has aggressively recruited companies from under-represented regions such as India, Southeast Asia and Africa, but China remains a tough spot. According to YC’s own data, fewer than 10 Chinese companies have passed through its corridors. That’s low considering that the organization counts over 1,400 graduates.

With events like the one in May, which helped snare LemonBox, and a new China-centric role for partner Eric Migicovsky, who founded Pebble, YC is trying harder than ever.