“I think the mistake everyone made was to think that Stories was a photography product,” says Instagram CEO Kevin Systrom. “If you look at all these interactivity features we’ve added, we’ve really made Stories something else. We’ve really innovated and made it our own.”

His version of the ephemeral slideshow format turns two years old today. By all accounts, it’s a wild success. Instagram Stories has 400 million daily users, compared to 191 million on Snapchat, which pioneered Stories. While the first year was about getting to parity with augmented reality filters and stickers, the two have since diverged. Instagram chose the viral path.

Snapchat has become more and more like Photoshop, with its magic eraser for removing objects, its green screen-style background changer, scissors for cut-and-pasting things and its fill-in paint bucket. These tools are remarkably powerful for living in a teen-centric consumer app. But many of these artistic concepts are too complicated for day-to-day Snapping. People don’t even think of using them when they could. And while what they produce is beautiful, the slides get tapped past and disappear just like any other photo or video.

Instagram could have become Photoshop. Its early photo-only feed’s editing filters and brightness sliders pointed in that direction. Instead, it chose to focus not on the “visual” but the “communication.” Instagram increasingly treats Stories as a two-way connection between creators and fans, or between friends. It’s not just one-to-many. It’s many-to-one, as well. 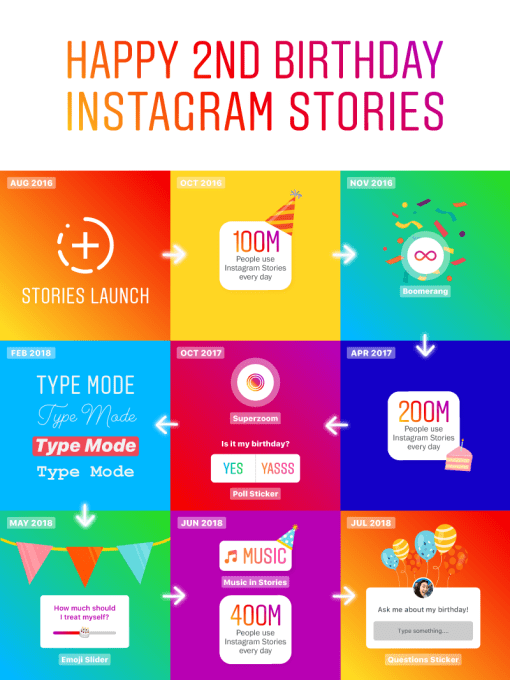 Instagram Stories arrived three years after Snapchat Stories, yet it was the first to let you tag friends so they’d get a notification. Now those friends can repost Stories you tag them in, or public posts on which they want to comment. You could finally dunk on other Instagrammers like you do with quote-tweets. It built polls with sliders friends can move to give you feedback about “how ridiculous is my outfit today?” Music stickers let you give a corny joke a corny soundtrack or share the epic song you heard in your head while looking out upon a beautiful landscape. And most recently, it launched the Question sticker so you can query friends through your Story and then share their answers there too. Suddenly, anyone could star in their own “Ask Me Anything.”

None of these Instagram tools require much “skill.” They’re designed not for designers, but for normal people trying to convey how they feel about the world around them. Since we’re social creatures, that perception is largely colored by someone’s friends or audience. Instagram lets you make them part of the Story. And the result is a product that grabs non-users or casual users and pulls them deeper into the Instagram universe, exposing people to the joy of creating something that lasts until tomorrow, not always forever.

Snap has been trying to get more interactive too, adding tagging for instance. It’s also got new multiplayer filter games called Snappables where you play with your face and can then post the footage to your Story. But again, they feel overly involved and therefore less accessible than where Instagram is going.

Mimicking Photoshop reinforces the idea that everything has to look polished. That’s the opposite of what Systrom was going for with the launch of Instagram Stories. “There will always be an element in any public broadcast system of trying to show off,” Systrom explains. “But what I see is it moving in the other direction. GIF stickers allow you to be way more informal than you used to be. Type mode means now people are just typing in thoughts rather than actually taking photos. Things like Superzoom with the TV effect or the beats — it’s anything but polished. If anything it’s a joke. Quantitatively people feel comfortable to post way more to Stories than to feed.”

Systrom is about to go on paternity leave, and has been using Stories from friends with kids to collect ideas about what to do with his own. When asked if he thinks Stories produces less of the dangerous envy inherent in the feeds of social media success theater we passively consume, Systrom tells me, “Just personally, it’s inspired me rather than it’s created any sense that I’m missing out.” Of course, that might be related to the fact that his life of attending the Met Gala and bicycling through Europe doesn’t leave much to envy. 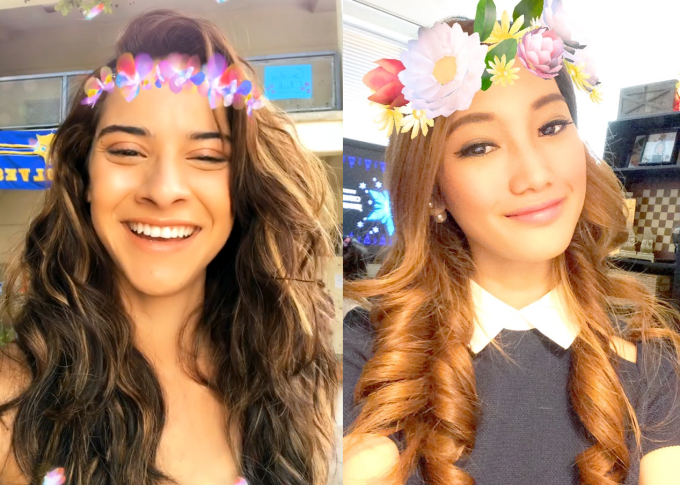 AR filters have become table stakes for Stories. On the left, Instagram. On the right, Snapchat.

The sense of comfort powered by Instagram purposefully pushing Stories to diverge from its classy feed has contributed to its explosion in popularity — not just for Stories but Instagram as a whole. It now has more than 1 billion users, in part driven by it introducing Stories to developing countries Snapchat never penetrated.

“Remember how at the launch of Stories, I said it was a format and we want to make it original? And there was a bunch of criticism around us adopting this format?” Systrom chides, knowing a fair amount of that criticism came from me. “My response was this is a format and we’re going to innovate and make it our own. The whole idea there is to make it not just about photography but about expression. It’s a canvas for you to express yourself.”

At the time, Systrom also told me, regarding copying Snapchat, “They deserve all the credit.” But Stories has since emerged as how Instagram expressed itself too, allowing it to break away from the staid perfection of the feed, becoming something much more goofy. 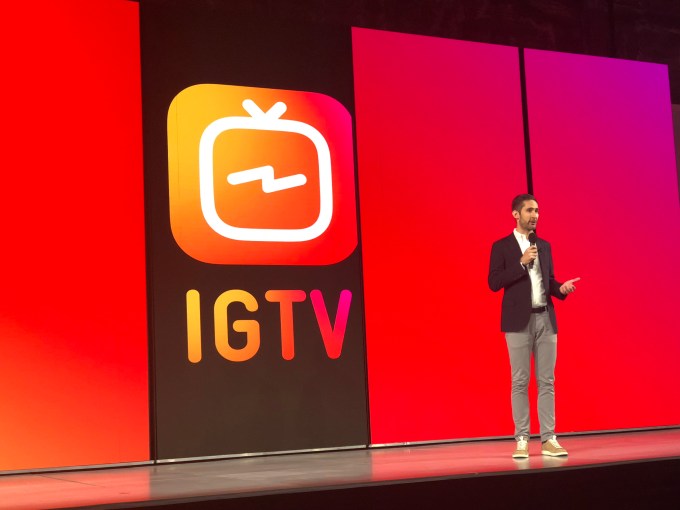 That success has emboldened it to try something truly new. IGTV lets people share longer-form vertical videos up to an hour in length in an age when vertical is for 15-second Stories and lengthy clips only exist in landscape mode.

“What I’m most proud of is that Instagram took a stand and tried a brand new thing that is frankly hard to pull off. Full-screen vertical video that’s mobile only. That doesn’t exist anywhere else,” Systrom beams. “So the question is can we pull that off, and the early signs are really good.” We’ll see if that’s born out in the numbers. Stories benefited from early adopters immediately knowing what to post thanks to Snapchat. The price IGTV pays for originality is a steep learning curve.

Last week when Facebook announced its revenue was decelerating as users shifted attention from its lucrative News Feed to Stories where it’s still educating advertisers, its share price tanked, deleting $120 billion in market cap. Yet imagine how much further it would have dropped if Systrom hadn’t been willing to put his pride aside, take Snapchat Stories, and give it the Insta spin? Instead, it led the way to Facebook now having more than 1.1 billion (duplicated) daily Stories users across its apps. That poises Facebook and Instagram to earn a ton off of Stories.

“There was a long time that desktop advertising worked really, really well, but we knew the future was mobile and we’d have to go there. There was some short-term pain. Everyone was worried that we wouldn’t monetize as well,” Systrom remembers. “We believe the future is the combination of feed and Stories, and it just takes time for Stories to get to the same level or even exceed feed.”

So does he feel vindicated in that once-derided decision to think of Stories not as Evan Spiegel’s property but a medium meant for everyone? “I don’t wake up everyday trying to feel vindicated. I wake up everyday trying to make sure our billion users have amazing stuff to use. I just feel lucky that they love what we produce,” Systrom says with a laugh. “I don’t know if that fits your definition of vindicated.”