Tade Oyerinde is obsessed with communications inside educational institutions. A few years ago, while studying at Leeds University in England, he founded Gleepost, a Craigslist-like service targeting college campuses.

The startup flopped, so Oyerinde moved on to build with his college roommate and twin brother Uniroulette, a Chatroulette clone but limited to people with .edu email addresses. It was here that he got a searing introduction to product design and also learned how to become a social hacker, using design choices to drive conversations and engagement. “With Uniroulette… we needed to have about 20 kids concurrently on just to make it work,” he explained to me. To get those numbers, the startup officially opened at 8pm each evening, and anyone who tried to login earlier was given a countdown timer.

To further drive engagement, Oyerinde created dozens if not hundreds of Facebook pages around the concept of love and missed connections targeting different campuses, such as Leeds Crushes or Bodleian Library Secrets. Students were hooked — and also getting carefully calibrated advertising messages to spend more time on Uniroulette. He raised $250k from angels in London, but ultimately, the startup lost traffic and eventually twinkled out.

Oyerinde hopes that the third time is a charm with his new project, Campuswire. The platform, launching publicly today, is designed to maximize the efficiency of classroom conversations, even among different disciplines from math to English. The product is certainly inspired from Slack and other current campus communications tools, but with an intense focus on saving the time of teachers and faculty.

“Seventy percent of the things that students need to communicate in a college class is asking a question,” Oyerinde said. “You need a balance of synchronous and asynchronous communications, and we had a bunch of experience with this.”

The challenge for campuses these days is that the methods by which faculty and students communicate couldn’t be more different. Existing incumbents like Blackboard have forums features, but the community is often moribund. Professors use email, which is asynchronous, but not easily shared among students attending a class. Meanwhile, today’s students are obsessed with SMS, Instagram, and YouTube as channels for communication. Campuswire’s goal is to meet everyone halfway. 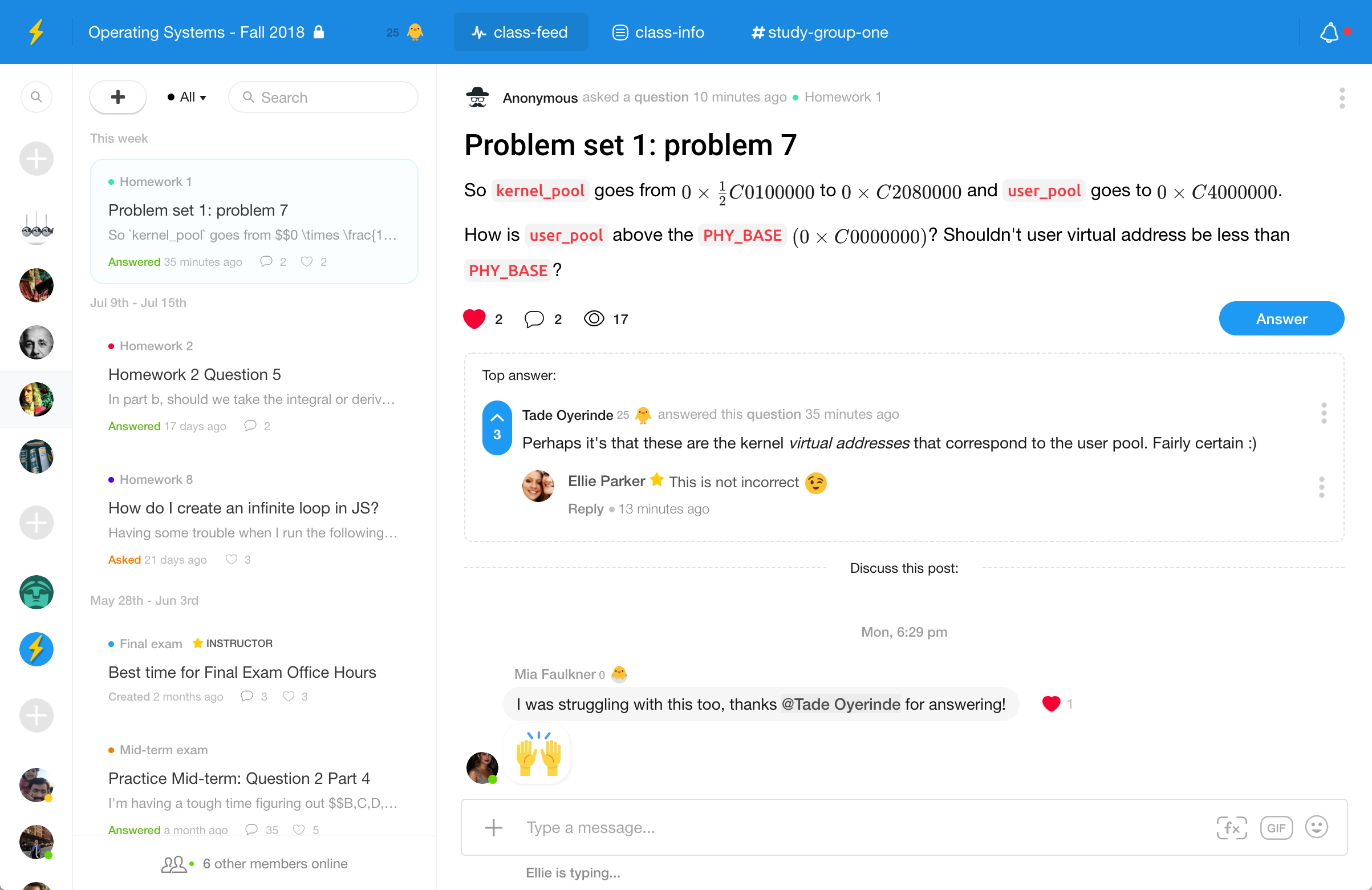 There were several design decisions that make Campuswire unique. One is that students can post questions anonymously in their classes. “40% of students were never going to ask questions unless they can do it anonymously,” Oyerinde said. He noted that they have had limited issues with trust and safety issues since class discussions are closed to non-enrolled students.

Most importantly, the design of the product is driven by efficiency. Questions are easy to surface for students, helping teachers limit repetitive answers. The other side of efficiency is encouraging students to chime in with their own answers. We wanted to “incentivize the top 5% of students to help each other out,” Oyerinde explained. “They literally jump in, so professors have to do less work.” That’s critical in classes where the number of students can be in the hundreds if not thousands.

The platform has been in beta since last fall at UCLA, and usage in the initial set of classes has been heavy. “Users use us over five hours per day in three out of the four classes in UCLA, and in all of them it was over three hours per day on average,” Oyerinde said. He also said that “we had over 75% 10-week retention.” The team chose UCLA because of its quarterly schedule, “so it meant we had twice the iteration half-life.”

Campuswire debuts just as the kickoff for the new school season gets underway. We are going to “continue with the student outreach and getting a wide cross-section of classes this fall,” he said. The startup now has a team of six based in New York City.