Tech news aggregator Techmeme is trying out a new way to make money — ad units that are directly tied to the stories on the front page.

The idea is that advertisers can specify company names or news categories that they want to target, then Techmeme will automatically include their message below relevant news stories.

For example, as I write this, the top story on the site is about Google’s potential plans to launch a censored version of the search engine in China, and underneath, there’s an ad from Yelp arguing that Google is “hurting the open internet.”

Techmeme founder Gabe Rivera tweeted that this could be a good way to “antagonize a particular company” or “hijack all news concerning that company on Techmeme to insert your rebuttal.” Or you could do something that’s a little less confrontational, like crypto wallet company BRD, which will run ads alongside cryptocurrency news. 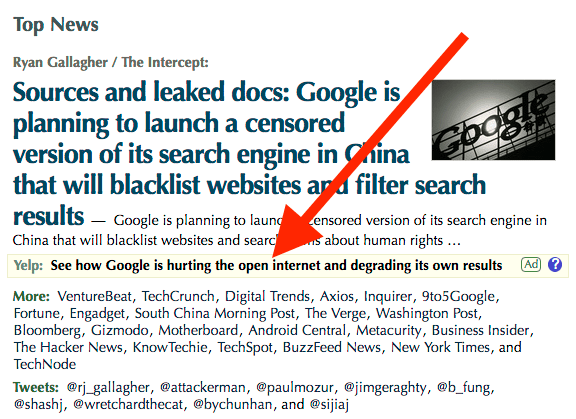 The idea of using advertisers to take on your competitors or hijack their message isn’t new — for example, it’s a normal tactic to target competitors’ brand names and other keywords in search campaigns. But this allows advertisers to do so in a way that’s both automated and centered on the latest headlines.

“Why is Techmeme the right venue for ads that react to news in this way? Because it’s where readers go to see ideas in conflict,” Rivera wrote in his announcement. “Techmeme is, after all, the arena where industry-driven news meets critical reaction and analysis. So by letting companies speak out and confront issues in this manner, we provide an additive, even entertaining experience for readers.”

Of course, it can be hard to predict when or how a company or topic will pop up in the news (and to be clear, Rivera said the editorial news mix on Techmeme won’t be affected by who’s purchasing ads). The idea, though, is to keep running the ads alongside related stories until Techmeme has delivered the placement hours committed to the advertiser.

“Gabe has kept Techmeme mostly free of advertising since its inception,” BRD VP of Global Marketing Spencer Chen told me via email. “Despite his Twitter persona, the man actually loves his readers. So anytime he rolls out a new ad product, there’s always a buzz to get in early to reach Techmeme’s highly influential and elevated audience.”