For developers, the process of determining whether every new update is going to botch some core functionality can take up a lot of time and resources, and things get far more complicated when you’re managing a multitude of apps.

Test.ai is building a comprehensive system for app testing that relies on bots, not human labor, to see whether an app is ready to start raking in the downloads.

The startup has just closed an $11 million Series A round led by Gradient Ventures, Google’s AI-focused venture fund. Also participating in the round were e.ventures, Uncork Capital and Zetta Venture Partners. Test.ai, which was founded in 2015, has raised $17.6 million to date.

“Every advancement in training AI systems enables an advancement in user testing, and test.ai is the leader in AI-powered testing technology. We’re excited to help them supercharge their growth as they test every app in the world,” Gradient Ventures founder Anna Patterson said in a statement. “In a couple years, AI testing will be ingrained into every company’s product flow.”

The company’s technology doesn’t just leverage AI to cut down on how long it takes for an app to be tested; there are much lengthier processes it helps eliminate when it comes to developers readying lists of scenarios to be tested. Test.ai has trained their bots on “tens of thousands of apps” to help it understand what an app looks like and what interface patterns they’re typically composed of. From there, they’re able to build their own scenario list and find what works and what doesn’t.

That can mean, in the case of an app like our own, tracking down a bookmark button and then deducing that there are certain process that users would go through to use its functionality. 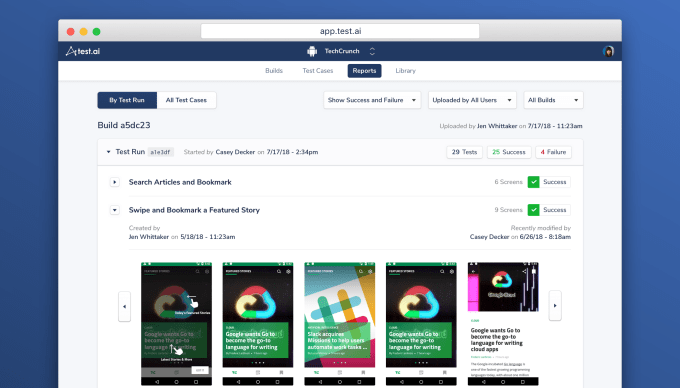 Right now, the utility is in the fact that bots scale so broadly and so quickly. While a startup working on a single app may have the flexibility to choose amongst a few options, larger enterprises with several aging products having to grapple with updated systems are in a bit more of a bind. Some of Test.ai’s larger unnamed partners that “make app stores” or devices are working at the stratospheric level having to verify tens of thousands of apps to ensure that everything is in working order.

“That’s an easy sell for us, almost too easy, because they don’t have the resources to individually test ten thousand apps every time something like Android gets updated,” CEO Jason Arbon tells TechCrunch.

The startup’s capabilities operate on a much more quantitative scale than human-powered competitors like UserTesting, which tend to emphasize testing for feedback that’s a bit more qualitative in nature. Test.ai’s founders believe that their system will be able to grapple with more nebulous concepts in the future as it analyzes more apps, and that it’s already gaining insights into concepts like whether a product appears “trustworthy,” though there are certainly other areas where bots are trailing the insights that can be delivered by human testers.

The founders say they hope to use this latest funding to scale operations for their growing list of enterprise clients and hire some new people.