Mammoth Biosciences, the biotech company that grew out of a close relationship with CRISPR legend Jennifer Doudna, has raised $23 million in a sturdy Series A. Mammoth previously raised $120,000 from NFX and the company continued quietly picking up funding as it built toward its exit from stealth mode in April 2018. Its current round was led by Mayfield with participation from NFX and 8VC.

The discovery of CRISPR, by all accounts a transformative scientific and technological breakthrough, is many things to many people, but for Mammoth Biosciences, it’s all about the search functionality.

“CRISPR is biology’s search engine first,” Mammoth co-founder and CEO Trevor Martin told TechCrunch in an interview. That means using a guide RNA to direct a CRISPR protein to search for any specific DNA or RNA sequence. That process provides a world of utility across fields like genotyping, oncology, infectious disease and even agriculture.

Mammoth plans to use the funding to make key hires and flesh out its IP portfolio, but most of the company’s resources will be used toward developing the platform that allows the company’s partners to plug in and search for their own biomarkers. Martin adds that the funding will also allow Mammoth to educate people about how CRISPR can play a powerful role in diagnostics. 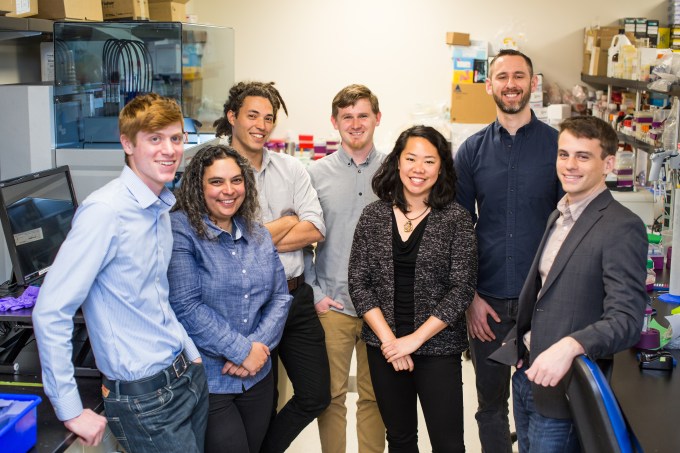 Mammoth is led by two Stanford PhDs, Trevor Martin (CEO) and Ashley Tehranchi (CTO), and two Berkeley PhDs, Lucas Harrington and Janice Chen. Jennifer Doudna is also a Mammoth co-founder and chair of the company’s advisory board. Along with its funding news, Mammoth adds protein engineering expert Dave Savage and infectious disease specialist Charles Chui to its scientific advisory board.

Future partnerships are central to Mammoth’s business, and the company aims to make its CRISPR-powered search engine the platform of choice for disease detection. The company is particularly keen on building out partnerships in the pharmaceutical and agricultural world, though also has long term plans to provide affordable point-of-care testing in the developing world.

“Mammoth has developed a transformative platform, able to detect nucleic acid assays on DNA and RNA without an associated device,” Mayfield’s Ursheet Parikh said of the company’s mission. “This has the potential to significantly reduce costs in diagnostics, which is a fundamental driving force in transforming healthcare.”