Unknown midterm election attackers that Facebook has removed were hosting a political rally next month that they pinned on Black Lives Matter, Antifa and other organizations, according to third-party event websites that scraped the now-removed Facebook events.

Facebook provided an image of the deleted “No Unite The Right 2 – DC” event as part of its announcement today that merely showed its image, title, date, location and that a Page called “Resisters” was one of the hosts of the propaganda event. But a scraped event description TechCrunch discovered on Rallyist provides deeper insight into the disruptive information operation. Facebook won’t name the source of the election interference but said the attackers shared a connection through a single account to the Russian Internet Research Agency responsible for 2016 presidential election interference on Facebook. 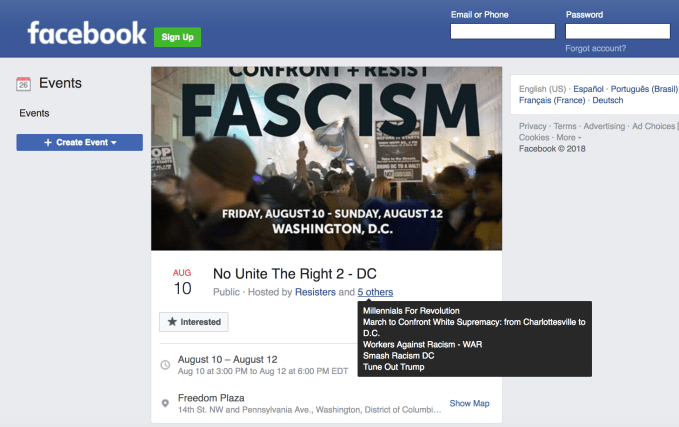 “We are calling all anti-fascists and people of good conscience to participate in international days of action August 10 through August 12 and a mass mobilization in Washington DC” the description reads. “We occupy ICE offices, confront racism, antisemitism, islamaphobia, xenophobia, and white nationalism. We will be in the streets on August 10-12, and we intend to win.” 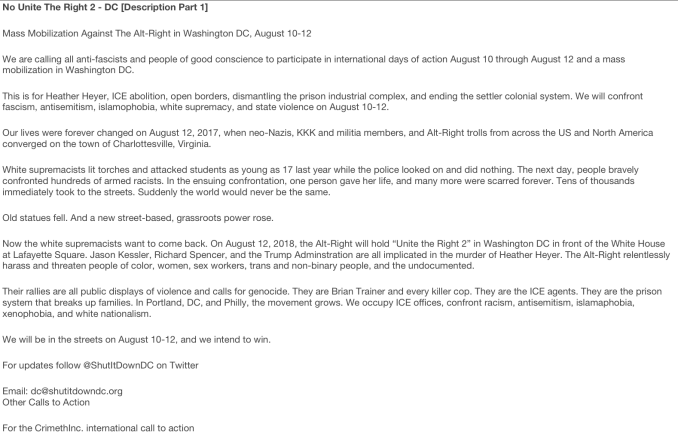 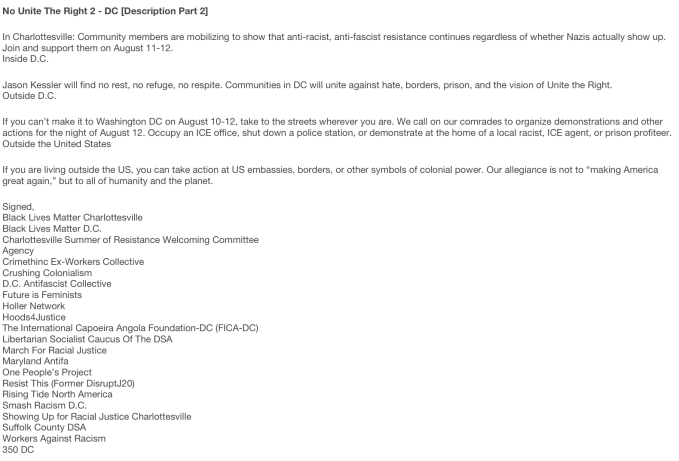 It’s unclear if the attackers effectively “forged” the signature of these groups, or duped them into signing off on supporting the rally. The attackers were potentially trying to blame these groups for the rallies in an effort to further sow discord in the political landscape. 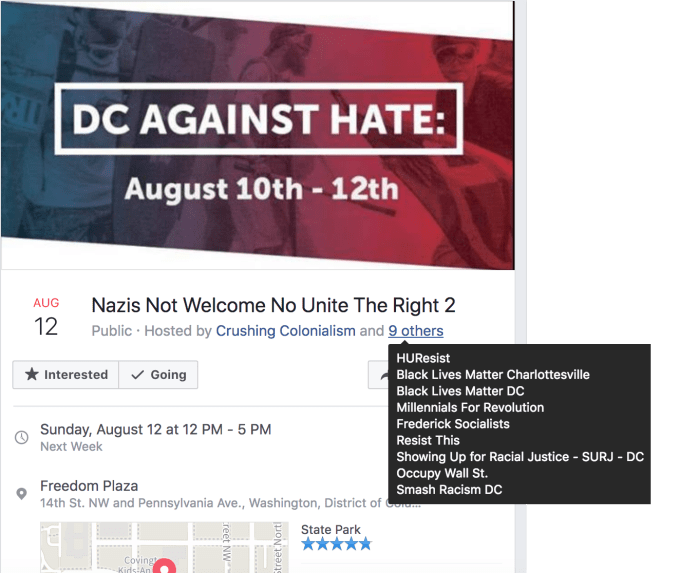 Facebook initially provided no comment about the description of the event, but then confirmed that it was originally created by the attackers’ since-deleted Page “Resisters,” which then later added several legitimate organizations as co-hosts: Millennials For Revolution, March To Confront White Supremacy – from Charlottesville to DC, Workers Against Racism – WAR, Smash Racism DC and Tune Out Trump. Strangely, those co-hosts have relaunched a new event with a similar name, “Nazis Not Welcome No Unite The Right 2” and similar description, including a similar but expanded “Signed by” list, and now including BLM Charlottesville and D.C. as co-hosts. 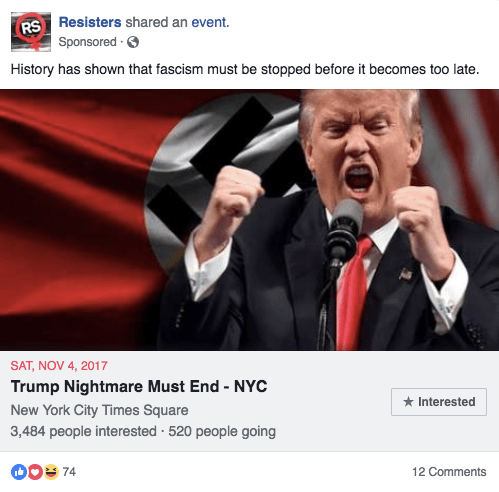 Meanwhile, Facebook also shared an image of a November 4th, 2017 “Trump Nightmare Must End – NYC” event, also without details of the description. A scraped version on the site AllEvents shows the description as “History has shown that fascism must be stopped before it becomes too late. There is only one force that can stop this nightmare: we, the people, acting together. On November 4 we’ll take to the streets demanding that Trump regime must go! We meet at Times Square (42 St and Broadway) at 2 PM!”

The co-opting of left-wing messaging and protests is a powerful strategy for the election interferers. It could provide the right-wing with excuses to claim that all left-wing protest against Trump or white supremacy is actually foreign governments or hackers, and that those protests don’t represent the views of real Americans.