According to COO Sheryl Sandberg, getting ahead of an event called “No Unite the Right 2, DC” is the reason behind Facebook’s decision to disclose new platform behavior that closely resembles previous Russian state-sponsored activity meant to sow political discord in the U.S.

“We’re sharing this today because the connection between these actors and the event planned in Washington next week,” Sandberg said, calling the disclosure “early” and noting that the company still does not have all the facts.

A Facebook Page called “Resisters” created the event, set to take place on August 10, as a protest against Unite the Right 2 — a follow-up event to last year’s deadly rally in Charlottesville, Va. that left peaceful counter-protester Heather Heyer dead. 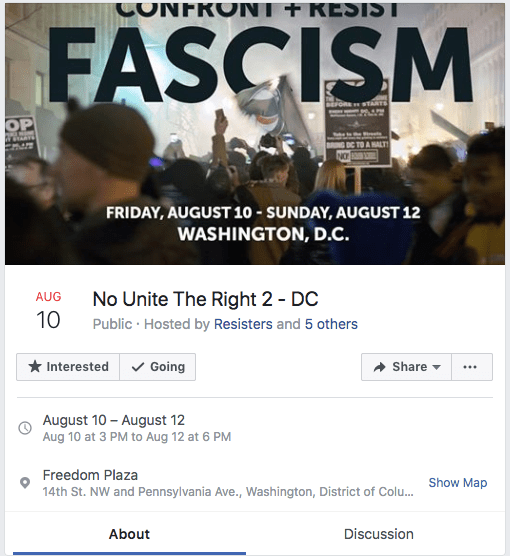 The Page, which Facebook identified as displaying “coordinated inauthentic behavior,” also worked with the admins from five authentic Facebook Pages to co-host the event and arrange transportation and logistics. Facebook has notified those users of its findings and taken down the event page.

This isn’t the first event coordinated by fake Facebook accounts with the likely intention of further polarizing U.S. voters. In a call today, Facebook noted that the new inauthentic accounts it found had created around 30 events. While the dates for two have yet to pass, “the others have taken place over the past year or so.”

Facebook will not yet formally attribute its new findings to the Russian state-linked Internet Research Agency (IRA). Still, the Resisters Page hosting “No Unite the Right 2, DC” listed a previously identified IRA account as a co-admin for “only seven minutes.”

That link, and whatever else the public doesn’t know at this time, is enough for the Senate Intel committee vice chairman Mark Warner to credit the Russian government with what appears to be an ongoing campaign of political influence.

“Today’s disclosure is further evidence that the Kremlin continues to exploit platforms like Facebook to sow division and spread disinformation, and I am glad that Facebook is taking some steps to pinpoint and address this activity,” Warner said in a statement provided to TechCrunch. “I also expect Facebook, along with other platform companies, will continue to identify Russian troll activity and to work with Congress on updating our laws to better protect our democracy in the future.”

Facebook’s chief security officer, Alex Stamos, maintained that the company “doesn’t think it’s appropriate for Facebook to give public commentary on political motivations of nation states” and calls the IRA link “interesting but not determinant.”