The social media apocalypse is on us this week. Days after Facebook’s stock took a record $123 billion plunge on a poor earnings report, Twitter’s shares are down nearly 20 percent after the company announced falling users numbers.

The microblogging service recorded a drop of one million monthly users in Q2, with 335 million overall and 68 million in the U.S.. International users stayed consistent, with U.S. numbers down from 69 million in the previous quarter.

The market seems spooked that Twitter has failed to grow in the U.S.. Indeed, one year ago it recorded 68 million users on home turf, and while it has grown its international presence by a fairly modest 3.5 percent over that period, there are doubts as to whether Twitter can increase its audience. The company itself said it expects to see its monthly active user count drop by “mid-single-digit millions.”

Twitter has increased its efforts finding and suspending fake accounts, which is said to have doubled over the past year, but it also said that it didn’t expect that to impact users numbers this quarter. 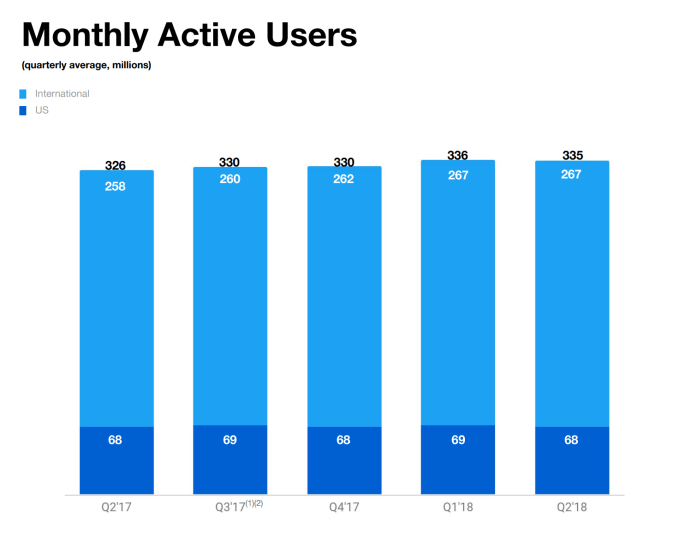 “When we suspend accounts, many of the removed accounts have already been excluded from MAU or DAU, either because the accounts were already inactive for more than one month at the time of suspension, or because they were caught at signup and were never included in MAU or DAU,” Twitter further explained in its release.

The company did say, though, that its work with SMS carriers and reallocation of resources, are the reasons why it is forecasting more user number declines.

While Twitter can (just about argue) that its daily user number grew by 11 percent in the quarter — a little higher than 10 percent in Q1 — the company doesn’t actually disclose this number.

The stock drop will be frustrating for executives because, in its favor, Twitter had a record quarter of profit. GAAP net income came in at $100 million with revenue climbing 24 percent year-on-year to reach $711 million. Adjusted EBITDA came in at $265 million — Twitter is predicting it will decline to $215-$235 million in the next quarter.