A two-day taxi driver strike in Barcelona this week, called to protest against the number of ride-hailing vehicles on the streets and failure to enforce national regulations that are supposed to cap private hire vehicle numbers, turned violent yesterday with protestors attacking cars and local media reporting attacks on drivers too.

The violence has led to a temporary suspension of all vehicle for hire services (VTC) in the city — thereby also including Uber and Cabify, both of which only run licensed driver services in the country.

Local newspaper La Vanguardia reports that drivers and even passengers were attacked during protests yesterday.

An Uber spokesman confirmed that some of its drivers had been attacked by protestors, telling us: “Rider and driver safety is our top priority. As a result of yesterday’s serious attacks the apps for professional licensed drivers have collectively decided to temporarily pause operations in Barcelona.”

A Cabify representative confirmed its service remains suspended in Barcelona. The company also condemned how its drivers were being “daily intimidated for simply exercising their right to work”.

“We firmly reject the hostile and violent environment that unwound yesterday in the city of Barcelona. Cabify respects any company or professional group’s right to strike as well as it respects the right of those who wish to continue to develop their activity under normal terms, whether they are taxi or VTC drivers,” it told us in a statement.

“We consider that the citizens and visitors of the city of Barcelona, which at this time of the year is at its peak season, have the right to move through the city and enjoy quality minimum services as well as other urban transportation alternatives they may need or desire.”

Taxi drivers are angry that the supposed national ratio of one professionally licensed vehicle for hire (VTC) per thirty taxis is not being upheld. The ride-hailing giants have been buying up licenses from other operators to ramp up their presence.

From 6:00 today Wednesday 25 and until 06:00 p.m. on Friday, July 27, the taxi drivers of the AMB have called a strike in defense of the proportion 1VTC / 30 taxis and the urban authorization of VTC.

At the same time city authorities have been attempting to enforce the ratio via local regulation — which the VTC sector has challenged in the courts.

Unauto VTC, a local association which represents the interests of the vehicle for hire sector, recently brought a challenge against an attempt by city authorities to impose its own VTC regulations — and succeeded in getting it suspended by the High Court last week over the potential impact on drivers and citizens.

In a statement announcing the VTC service suspension yesterday and condemning the violence, Unauto VTC says the taxi drivers were protesting that court decision.

Although taxi drivers responding to the association’s Twitter account accused the body of cherry picking the laws it supports and ignoring those it does not.

The nationwide situation in Spain is that VTC licenses have been capped at a 1:30 ratio since 2015 but the cap faces legal challenges and is seemingly not being actively enforced — thereby allowing ride-hailing companies to circumvent it by buying up licenses from other operators.

At the same time, Spain’s Competition Authority has been pushing for gradual deregulation of the sector. While taxi associations have been pushing back with strikes and protests — the latest of which has seen drivers attacked and cars smashed and sprayed with paint stripper amid demonstrations in Barcelona streets.

According to La Vanguardia, Unauto VTC’s president, Eduardo Martin, said he had seen evidence of “two serious assaults” during protests yesterday where the victims had to be taken to hospital.

“A driver has been burned with acid on his face, with which they use to burn the paint of the vehicles, and another has been beaten and has been transferred unconscious to the hospital,” he told the newspaper.

The mayor of Barcelona, Ada Colau, who has driven the city’s attempt to regulate the VTC sector to protect the taxi industry, condemned the violence in a tweet — writing that while everyone supports the taxi sector no one supports the violent acts seen on the streets of the city yesterday.

Her tweet linked to a video showing a group of protestors violently attacking a Cabify car which is said to have contained a French family. La Vanguardia’s report contains similar images of violent protest.

In its statement, Unauto VTC said it made the decision to temporarily suspend private hire vehicle services in Barcelona in light of the level of violence perpetrated by what it described as “radical groups”.

“Despite having experienced episodes of violence on other occasions, the gravity of various attacks suffered this morning in Barcelona obliges the sector, including Uber and Cabify, to temporarily suspend activity in Barcelona until the situation returns to normal,” it writes.

It goes on to express “total support for all drivers attacked today in Barcelona and thousands of drivers throughout Spain”, and to apologize to “the thousands of passengers who trust us to move around Barcelona every day”, adding: “We will work with the authorities so that the perpetrators are arrested and tried.

“We ask for the protection of the institutions and state security forces to put an end to this situation and protect the thousands of workers in the VTC sector, who are not only denied their right to work but also see their physical integrity increasingly threatened.” 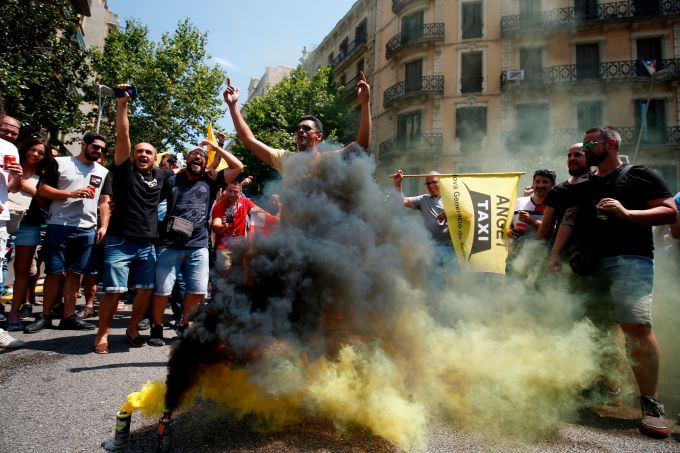 Taxi drivers gather outside the government delegation office during a strike by cab drivers in Barcelona on July 25, 2018. (Photo by Pau Barrena / AFP) (Photo credit should read PAU BARRENA/AFP/Getty Images)

A local taxi association, Elite Taxi BCN, also put out its own communique yesterday via Twitter — condemning the violence and appealing for calm.

In the statement it writes that the images of taxi drivers fighting in the streets will only harm the sector, and goes on to call for peaceful protest.

“They are not going to shut us up in any way, we are not going to accept this corrupt situation which we will not refer to in any other way. Our fight is and will be focused on the courts to get to the end of this rot… no matter how much it costs us,” it writes. “We ask for peace and calm and maximum respect — especially for the people.”

Uber only returned to Barcelona in March — buying its way into the VTC sector by shelling out to obtain licenses from existing operator/s. The company began with 130 drivers but will not disclose how many are now operating in the city.

When ride-hailing services relaunched in the city earlier this year, local press reported comments by an Elite Taxi spokesperson who warned: “Drivers of Uber and Cabify, welcome to hell.”

Uber does not operate its p2p non-professional driver service in Barcelona, nor in Madrid — the other city where it operates in Spain. Nor indeed in the vast majority of Europe where it says it operates under existing transportation laws, i.e. using only licensed drivers.

The reason for that also loops back to Barcelona — where local taxi associations have a long history of fighting Uber. It was a 2014 legal challenge lodged locally against the company’s unlicensed p2p services that went all the way up to Europe’s top court, where judges last year ruled that Uber is a transportation company not a tech platform — thereby outlawing its earlier expansionist playbook of taxi law circumvention.

The CJEU decision has locked in the strategic gear shift Uber has made in Europe in recent years in the face of a series of (at times violent) taxi industry protests — focusing instead on lobbying city and national regulators to liberalize and reform transport rules in its favor.

This month, for example, it relaunched a service in Finland after suspending operations last year to wait for reforms to be passed.

For its part, Cabify, a Spanish ride-hailing startup which also operates in Latin America, argues that “the Taxi is not our competitor” — saying its founding mission has been “to replace the use of the private vehicle as a means of transportation inside the city”.

“More than 50% of the commutes done within the city are made by private cars and the only victory we aim to is to reduce that percentage as far as possible,” it told us. “If we reach that goal, this could represent the increase of demand for alternative mobility services such as ours and taxi’s, being a common goal that would benefit us all.” 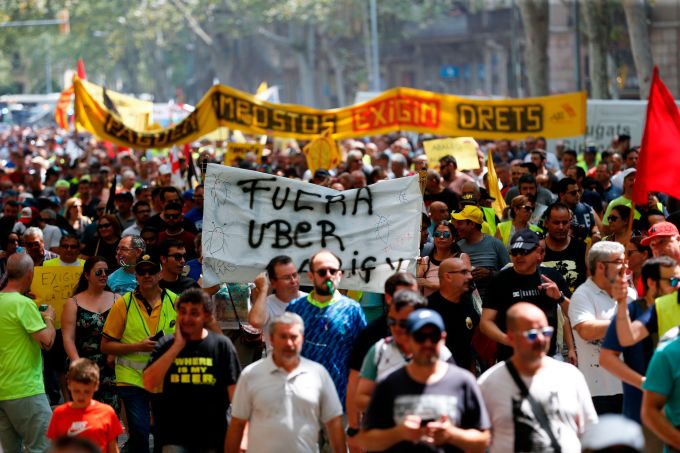 Taxi drivers hold a sign reading “Uber out” as they march during a strike by cab drivers in Barcelona on July 25, 2018. (Photo by Pau Barrena / AFP) (Photo credit should read PAU BARRENA/AFP/Getty Images)

Commenting on the VTC regulation that’s been proposed by the city of Barcelona (but blocked by the court), it called for joint working between all the stakeholders to modernize laws without undermining protections.

“We believe that unilateral solutions are not the right solutions to build the mobility of the future and that all players must work together with the administration in order to find the way to ensure the market’s evolution and the protection of all of those who operate in it,” it said.

“Thus, we believe that the final consumer, as one of the most affected parties in the present and futures decision regarding the sector, deserves to be heard and contemplated in all analyses. Cabify counts with more than 3 million users in Spain whom have found usefulness in the service we provide through our app,
which they’ve rated as 4.77/5.”

But Cabify has also been taking a leaf out of Uber’s old playbook by emailing its user-base to mobilize them to lobby online on its behalf — using the hashtag #HaciaDóndeNosMovemos; a phrase which translates to ‘this is where we’re going’.

There’s no official word on when VTC services will resume in the city — but it seems likely the industry suspension will be lifted once the taxi strike concludes tomorrow evening, if not before.