IGTV didn’t get the benefit of being splayed out atop Instagram like Stories did. Instead, the long-form video hub is a bit more distant, located in a standalone app as well as behind a static orange button on the main app’s homescreen. That means users can go right on tapping and scrolling through Instagram without coming across IGTV’s longer videos, which range up to an hour.

IGTV has only been out a month and Instagram’s feed has been around for eight years, so it makes sense to try to push views from the app’s core feature to this new one. That’s why Instagram is experimenting with a way to show off a carousel of IGTV videos in its main app’s feed. Spotted by app researcher Jane Manchun Wong, we asked Instagram about it. A spokesperson confirmed it was testing the carousel, and provided this statement: “We’re always testing new and different ways to surface interesting content for people on Instagram.” 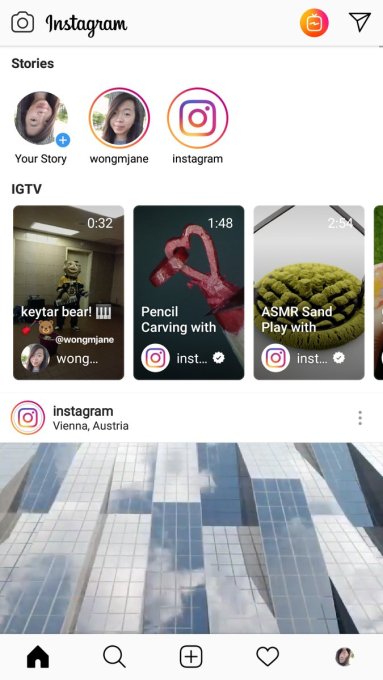 The IGTV carousel appears below the Stories tray, pushing down the traditional feed so less of the first photo or video immediately appears on the screen. It shows a preview tile of the IGTV videos with overlaid titles and lengths, plus the creator’s name and profile pic. They look similar to Snapchat’s Discover page and the carousels of “Recent Stories” Instagram began running mid-feed last year.

By teasing IGTV’s actual content rather than just slapping a logo button atop the screen, Instagram might get more users to check out the feature and standalone app. More views could in turn lure more content from creators. If they don’t see IGTV’s audience as significant, they won’t go to the trouble of shooting long-form vertical video for the platform or editing their landscape Instagram feed and YouTube videos for the format. Given yesterday’s bloodbath of a Facebook earnings report, there’s more pressure than ever on Instagram to pull its weight. Facebook sunk to its slowest growth rate in history, losing users in Europe and going flat in North America. In fact, it revealed a new “family of apps audience” metric of 2.5 billion people using at least one of Facebook’s apps (Facebook, Instagram, WhatsApp or Messenger) to distract from the bad news. That stat will let Facebook hide how younger users are abandoning it in favor of Instagram.

The big concern is that vertical videos and Stories are the future of content creation and consumption, but Facebook hasn’t figured out how to monetize these formats as well as its tried-and-true News Feed ads. Concerns about eyeballs shifting away from feeds faster than ad dollars contributed to Facebook’s 20 percent share price drop erasing $120 billion in market cap.

But Facebook’s saving grace, and the reason the stock might bounce back, is that it ruthlessly cloned Snapchat Stories for two years before it was obvious that it had to and now has 1.1 billion daily Stories users across its apps. If Facebook said Stories were the future but it was way behind, it could have been beaten down even worse by Wall Street.