WeWork rivals are in the money this year. India’s biggest rival to the U.S. co-working giant, a Mumbai-headquartered startup called Awfis, announced that it has raised $20 million in new capital for expansion. The news comes just after Hong Kong-based Campfire pulled in $18 million.

Awfis raised its new funds, which are a Series C round, from Sequoia India, Innoven Capital — the fund connected with Singapore sovereign fund Temasek — and TTS:IO, The Three Sisters, a family fund run by the three daughters of banking billionaire Rana Kapoor.

TTS:IO jointly incubated the project in 2015, while Sequoia India led its $20 Series B round last year.

CEO Amit Ramani stressed that his company is taking a different route to WeWork, which entered India last year and currently has eight locations. Awfis claims 55 centers which house 25,000 seats — it says it has a membership base of 15,000. The startup is aiming to scale to 90-100 centers and 40,000 seats over the next year.

“We had a big headstart and we have a massive lead right now,” Ramani told TechCrunch. “We’re really very different [to WeWork] from a commercial real estate perspective and we have built knowledge of micro-markets across India and are expanding beyond CBDs in our cities and into new locations.”

While WeWork shoots for a premium offering for startups, Ramani said Awfis is happy taking a more value-focused approach and also looking to the meat of the market, SMEs and corporates. Awfis has its halo-style locations, but the company is opening to turning any vacant real estate into co-working. Case in point, it has taken over unused retail space in malls and even one floor of a hotel while it offers traditional-style office rentals to some customers. 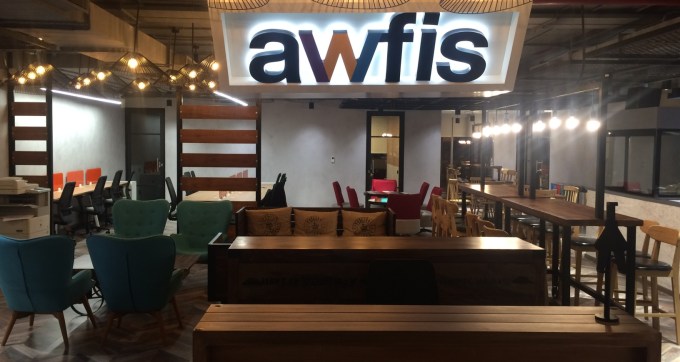 It also adopts a more collaborative approach with land-owners. While we work offers ‘Powered By We’ — a service that redesigns existing office space for companies — Awfis takes a pragmatic approach to selecting space.

“It’s more of a JV. We run the whole show but the space owner brings in the capex and there’s no minimum guarantee but they take a percentage of profits,” Ramani explained.

Right now, he said, around 55 percent of Awfis’ capacity is managed, but he intends to raise that figure to 60 percent.

Aside from that, he said also that Awfis reaches more enterprise and SME driven customers who he believes appreciate the focus on value. In some cases, he said, expansion into new cities is preempted by a request from an existing customer, while Awfis offers a service for SMEs that effectively gives them their own office within a designated “co-working space.”

“We can set up head offices and customize our product for them with personalized space and services,” Ramani explained.

As a capital intensive market, Ramani said fundraising will be “very regular,” with this next round likely to come in seven to eight months. WeWork has bought up competitors in Greater China (Naked Hub) and Southeast Asia (Spacemob) to grow its footprint in Asia, but so far it hasn’t been in touch with Awfis, its CEO said. He’s not expecting a call, however, as he believes there’s enough room for “four to five” companies operating at scale in India.

“The market is huge and there’s a place for multiple players to exist. [WeWork] are bit more premier range and we are more value driven, but we’re betting on that for a much larger market share.”