The pace of cord cutting in the U.S. is increasing faster than expected, according to a new forecast released this week by eMarketer. The analyst firm is now projecting the number of those ditching their subscriptions to cable and satellite TV will climb 32.8 percent this year to reach 33 million people – a figure that’s higher than the 22 percent growth rate and 27.1 million cord cutters it had estimated around this time last year.

The report points out that partnerships between traditional pay TV companies and over-the-top providers, such as Netflix, haven’t helped to stem the tide of cord cutting. Most U.S. pay TV providers – including Dish, Charter and Comcast – offer integrations with Netflix today, it notes. But it seems cord cutters are more interested in just Netflix and other streaming services, not in pay TV plus Netflix. 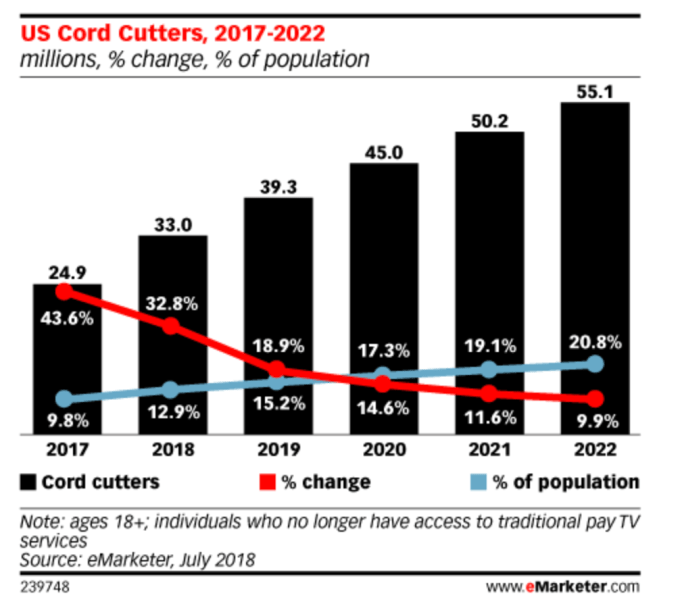 “These partnerships are still in the early stages, so we don’t foresee them having a significant impact reducing churn this year,” said eMarketer senior forecasting analyst Christopher Bendtsen. “With more pay TV and [over-the-top] partnerships expected in the future, combined with other strategies, providers could eventually slow—but not stop—the losses,” he noted.

There are 186.7 million U.S. adults watching cable, satellite or telco-provided pay TV in 2018, compared with the 33 million projected cord cutters. However, the number of pay TV subscribers is down 3.8 percent over last year, which is a little bit higher than the 3.4 drop in 2017. 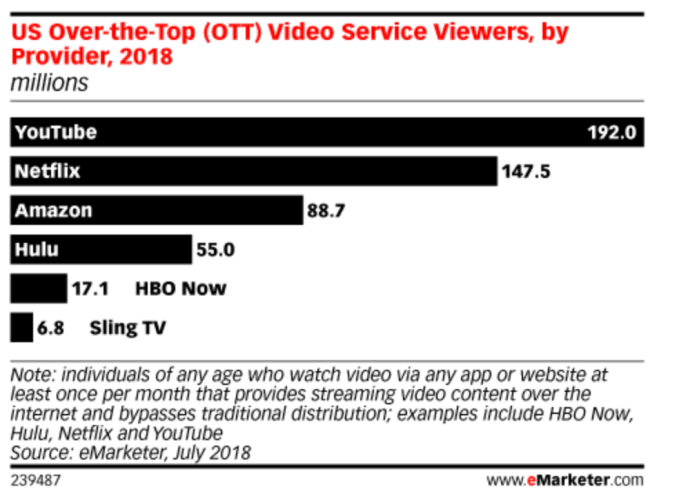 These figures are higher than currently reported subscriber numbers. For example, Hulu today says it has 20 million subscribers. Sling TV has 2.3 million. Netflix has 57 million. But eMarketer isn’t tracking “subscribers” – it’s estimating “viewers,” which it says is any individual of any age watching the streaming service at least once per month. That means it’s accounting for households with multiple people, including children.

The firm says cord cutters are attracted to the platforms not just because of the lower cost, but also the original programming.

“The main factor fueling growth of on-demand streaming platforms is their original content,” said eMarketer principal analyst Paul Verna. “Consumers increasingly choose services on the strength of the programming they offer, and the platforms are stepping up with billions in spending on premium shows. Another factor driving the acceleration of cord-cutting is the availability of compelling and affordable live TV packages that are delivered via the internet without the need for installation fees or hardware,” he added.