This review took a lot of pork. Over the last few months, I’ve used the Traeger Timberline 850 several times a week. Cooking on this grill is easier than using an oven. With a little bit of planning, a person can simultaneously grill a flock of chickens, a couple of pork butts and a load of veggies and have them turn out perfectly. I did, and it was the best Mother’s Day ever.

It’s simple: This grill can cook the perfect brisket every time. It doesn’t take any skill. Just follow the instructions, and in 12-14 hours, an award-winning brisket will melt in your mouth. And therein lies the rub. This grill turns barbecuing from an art to a science.

My completely unscientific ranking of all the food I cooked on this grill:

Everything from chicken to every cut of pork to every sort of vegetable comes out nearly perfectly. Just follow the instructions, set the temperature and walk away. As long as the pellet hopper has enough fuel, most food will be a blue ribbon contender.

I cooked everything I could on this grill. It excels at long and slow. Items like ribs and pork shoulders and brisket are perfect for this grill. Poultry turns out picture perfect. The indirect nature of the grill makes a perfect tray of veggies. But the grill isn’t ideal for everything. Items that need high, direct heat aren’t great on this Traeger grill. Steaks and hamburgers aren’t as good as what comes off other grills. That’s to expected though.

The grill uses little pellets of compressed wood as fuel. Loaded in a hopper on the side of the grill, they’re gravity-fed into an auger that methodically pulls the pellets to a small firebox on the bottom of the grill where they’re burned, providing the right temperature and amount of smoke. A control panel on the front of the hopper lets the user select the desired temperature in single digit increments from 165 to 500 degrees.

Once the appropriate temperature is selected, the grill’s computer makes the necessary adjustments. Want to crank the heat from 220 degrees to 500? It takes about 10 minutes and just a twist of a dial. 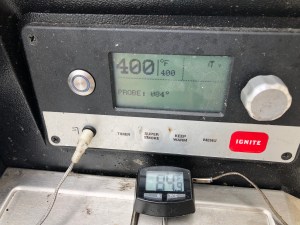 I found the built-in probe thermometer accurate. It registered within a degree of my Weber meat thermometer. More importantly during my time with the grill, the meat cooked on the grill was done when the thermometer said it was done.

The Timberline 850 is one of Traeger’s largest grills though it’s not evident from the outside. That’s part of the beauty. It’s compact but can hold a crazy amount of food thanks to three deep trays. For Mother’s Day I cooked six chickens on the bottom level, a pork belly on the middle level and veggies on top, and for a little bit, they all shared the grill. Other times, I cooked four pork butts and two racks of ribs, and there was still plenty of room left.

The grill’s vertical design allows it to hold a lot of food while minimizing hot spots. This design is what sets it apart from similar pellet grills. I didn’t experience a substantial difference in cooking ability on any of the levels.

This grill comes with wifi. Traeger calls it WiFire because that’s fun. It’s handy, and I use it a lot more than I expected. The app lets users see and adjust the temperature of the grill and monitor the temperature of the meat probe. The connection is rock-solid. Past experiences with wifi-enabled appliances set the expectation that I would have to continually re-connect the grill to my network. That’s not the case. The app has never lost connection to my network. I wish there were an Alexa app so I can talk to my grill.

And now the bad.

This grill is expensive. It’s $1700. That’s crazy. I own several Weber grills, and after 20 years of practice, I can cook a chicken better on a Weber than on this Traeger grill. But it took years to get there. The Traeger makes cooking a great chicken possible from the first time. What’s more, there are a handful of Traeger competitors that offer grills with similar features for often half the price: Green Mountain Grills, Camp Chef, Z Grills, Pit Boss. Google Pellet Grills.

Is this grill worth $1700 when compared to the others? No, I don’t think so though an argument could be made around its relativity small footprint compared to its capacity. A person can cook a lot on this thing, and it doesn’t take up more room than a standard gas grill. Still, unless you’re grilling for a family of 20 every Sunday, I would look at other models while considering this one. Traeger itself offers a bunch of models that cook using the same system for a lot less.

I had some issues with the Timberline 850. 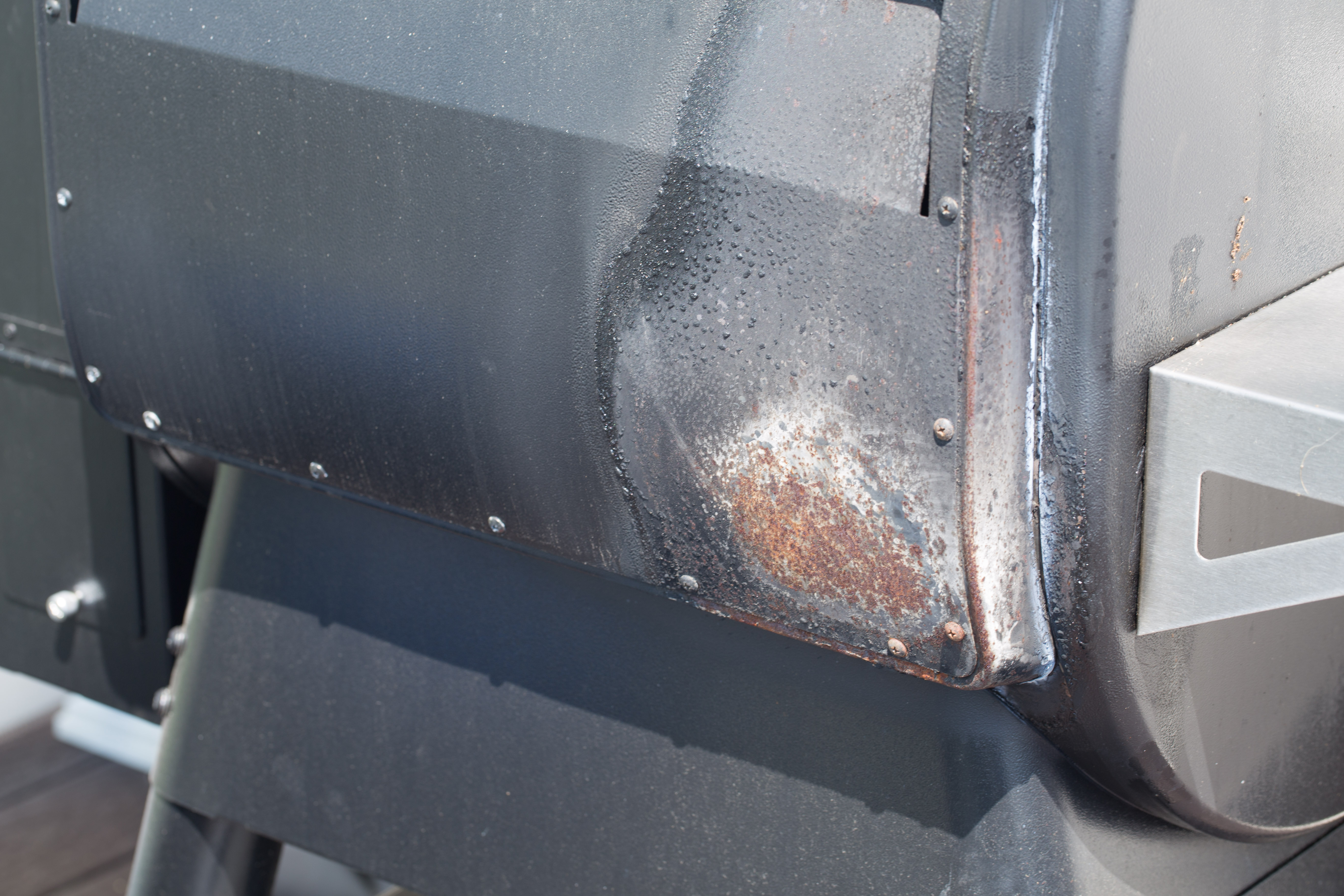 Grease fires. I had two over the last few months. Both were my fault, but the grill suffered. One time I had a tray overloaded with oiled veggies. Some oil seeped behind the drip plate that guards the firebox and caused a fire out of my reach. The temperature blasted to over 700 degrees, tripping a sensor and shutting off the grill. But the fire raged on for a few minutes in the closed grill. Something similar happened when I had to cook 50 of those horrible frozen hamburger patties. Grease from one dripped down the back of the grill and started a fire. Same thing: the sensor tripped and the grill shut off. But look at the rear of the grill. The paint is peeling, and I fear the steel is damaged though it feels fine. 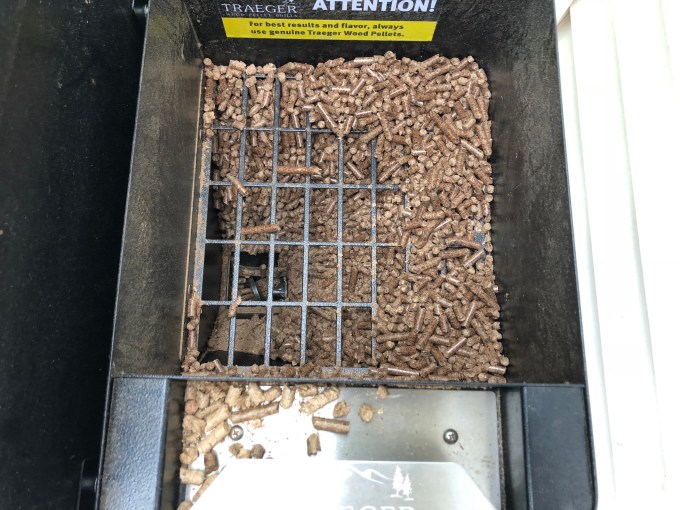 The grill shutoff twice in the middle of an 8-hour pork butt. I caught the first time within a few minutes; the second time it ruined my pork butt. The hopper is to blame.

The hopper in this model is poorly designed. In my mind, it’s reasonable to expect most of the hopper to empty itself without user intervention. That’s not the case. The auger easily grabs the pellets and pulls them in, but the hopper is too wide. This causes the pellets to sit on the side of the container where the auger can’t reach. By my estimate, nearly 1/4 of the pellets can sit on the sidelines, useless until the owner pushes them down into the path of the auger. To be clear if the hopper is more than half full, this is not an issue. It’s when the hopper is half exhausted that the owner needs to watch the levels.

This grill does a lot of things right. It cooks like a pro. The Timberline 850 makes you, the cook, look like a pit boss. I like it a lot. Getting over the initial price is hard. $1700 is a lot for a grill when similar grills can be had for less than half. Without a direct comparison, all I can say is the Traeger Timberline 850 is a rock solid barbecue grill with a few flaws. Its design lets it hold a lot of food without taking up a lot of deck space. It excels at low and slow cooking, and for my money, that’s the best way to cook.