Outvote, a new Y Combinator-backed startup, wants to make grassroots-style campaigning easier and more personal, with the launch of an app that allows people to text their friends with reminders to vote. The idea is to take advantage of people’s willingness to use social sharing to communicate about political issues, while also leveraging the simplicity that comes with tweeting or posting to Facebook and turning that into an actionable reminder that can actually drive people to the polls during critical times.

The startup was founded by Naseem Makiya, a Harvard-educated software engineer with a background in startups, including San Francisco-based Moovweb and Cambridge area’s DataCamp; along with Nadeem Mazen, an MIT grad and interactive designer who once worked with OK GO on one of its viral music videos, and who now owns the Cambridge-based creative agency Nimblebot.

Mazen, who has since moved into an advisory role with Outvote, also has more direct political experience, having run for public office himself. In fact, he learned first-hand how every vote counts, having won his Cambridge City Council position in 2013 by just six votes.

He also attributed his second election win to organizing low propensity, minority and younger voters — plus “really doing a lot of texting and a lot of outreach through my friend networks,” says Mazen.

When Mazen’s time in politics ended, he then helped others get elected using similar means. Later, he and Makiya brought together a group of Harvard and MIT folks to formalize a company around the technology they were using. This became Outvote. 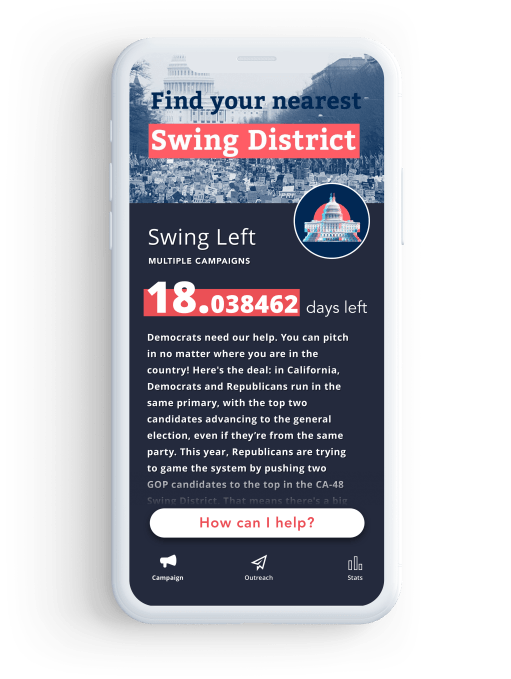 While today there are a lot of tools for voter outreach, many of those operated by well-known organizations, like MoveOn, for example, involve people opting in to receive texts from the group in question. Outvote is different because it’s a tool that helps individual voters reach out to their own personal acquaintances, family and friends.

“The way campaigns are run right now is most of the budget is spent on ads that are really low ROI — they have some effect on persuasion, but less effect on actual voter turnout,” explains Makiya. “With this effort, we’re trying to bring politics back to more of word-of-mouth and conversations between friends,” he says.

The team began working on the technology for Outvote last summer, and officially founded the company early this year.

While individuals are the app’s end users, they’re brought into the app by a campaign.

Users give the app permission to upload their phone’s contacts, which Outvote matches up with registered voter databases. That way, you’ll only be texting those who can actually go vote in your district. When the matching completes, the app has scripts that allow users to just click to text your friends a message from your own phone number. In other words, it’s no longer a political campaign or organization bugging people to go vote via text — it’s a friend. If your friends have a problem with the unsolicited text, they’ll have to tell you.

The app also uses some sort of basic modeling to figure out who best to text, based on things like past voter history, whether that person tends to vote in the primaries, if they’re a registered Democrat and so on.

Oh, yes, that’s right — this app is built for Democratic campaigns only.

Outvote makes no apologies about the fact that it is a tool designed to help Democrats win back seats across the U.S., both on local and national levels.

“We think it’s really critical that Democrats begin to invest in and promote technology. The right is doing a much better job of investing in some of the niche technology,” says Mazen. “And, obviously, groups like Cambridge Analytica and folks have been, I would say, underhanded, in their use of technology,” he adds. “We have to work twice as hard to be twice as resolute, as a result.”

The company says it has turned down right-leaning independents and Republican campaigns that wanted to use its technology, and is instead piloting with around 50 Democratic campaigns at present. Campaigns will be charged a low monthly fee for using Outvote that will vary depending on their size. However, many of the pilot customers are using Outvote for free at this time.

The goal is to make Outvote far more affordable than the existing mass-texting services that charge as much as 30 cents per person per month, which can cost campaigns hundreds of thousands of dollars at scale. Outvote aims to be around 2 to 5 cents per text, it says.

For now, its focus is on raising awareness about the candidate and their issues, and getting people to the polls. It’s not offering the sort of “call your congressman”-style outreach efforts you’ll find in some other political apps.

Outvote is also partnered with , Represent.Us, Flippable, the DNC, Vote.org and Swing Left, according to its website.

The startup is already reporting some early successes. When used last November, it found millennials contacted through Outvote were twice as likely to vote, while non-millennials were 50 percent more likely to vote. The company doesn’t have the data yet from how it’s been doing in the primaries, but says it’s been getting good feedback from the participating campaigns.

In addition to the Y Combinator backing, Outvote has raised $300,000 in seed funding from 2enable Partners ahead of Demo Day.

Outvote’s app is available on both iOS and Android.

* The Movement Cooperative asked to be removed from the article. Their logo was on Outvote’s website because a partnership was pending, we’re told. Given the request, it’s unclear at this time what the status of their involvement will be. Outvote said they’ll update us if the partnership is finalized.