For the past few months, Facebook has been testing something it calls “Watch Party”. It’s a feature that would let Facebook Groups host shared video streaming sessions, with everyone in the group being able to see/comment on the same videos at the same time. Take the Facebook Live concept and swap in a queue of pre-selected videos to make a sort of ad hoc video channel, and that’s a Watch Party.

Today the company is rolling the feature out to all Facebook Groups.

1) Starting a watch party is just like posting anything else to a group’s wall. Give it a caption to catch people’s attention, maybe give it an image, and post away. 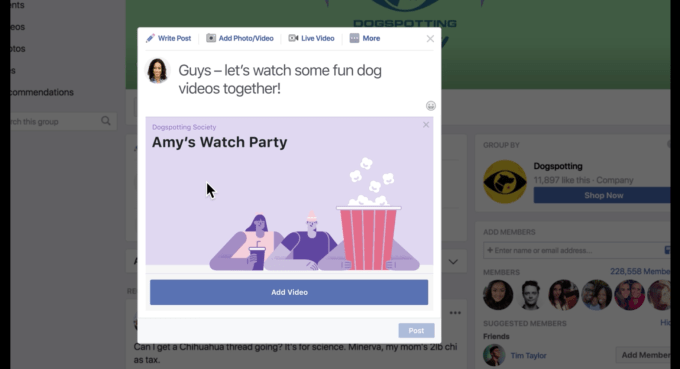 2) Add a few videos to start filling the queue 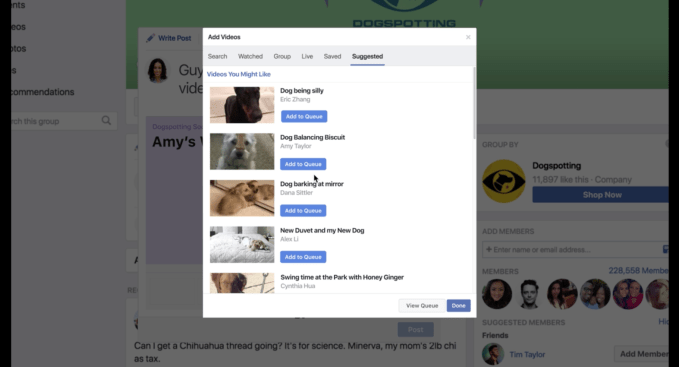 3) Once a few people have joined, the stream will start. The video will be synced up for all viewers, with hosts granted the ability to scrub back and forth in a video’s timeline. You can add more videos as you go.

For those who might’ve gotten early access to Watch Party back when it was in testing mode, they’ve added a few new features for the release:

The feature is currently limited to Facebook Groups; the company says it’s testing support on Pages, but it’s not quite ready yet.

One other limitation to the current form: it’ll only work with videos hosted on Facebook (no YouTube, Twitter, etc), presumably due to all sorts of technical/licensing issues. (Plus, you know, competition.)

(On that note… Hey Netflix: if you could go ahead and officially build something like this so I can watch through The Office with my wife for the 400th time even when I’m traveling, that’d be great. )

I’m curious to see how different Facebook Groups use this. While it’s got its intended fun uses, plopping a big audience in front of the same video with a shared comment stream always has potential to backfire — hand a bunch of people on the Internet a microphone and an audience, and things can get rowdy fast. At the very least, it’s one more thing for Facebook to try to moderate at a time when its plate is already pretty full.