Twitch wants more people to stream, so it’s going to begin teaching them how. The video game streaming site today announced the launch of Twitch Creator Camp, a new educational resource that helps newcomers learn the basics of streaming, as well as how to build up a channel, connect with fans, and earn rewards.

The launch of the how-to site comes about a week after an article by The Verge detailed the long tail of Twitch streamers, with a focus on those who spend years broadcasting to no one in the hopes of one day gaining a following.

The article raised the question that, in the age of live streaming, where every major social company – including Facebook, Instagram and YouTube – today offers easy streaming tools, there many not be enough of an audience for all the content creators are producing.

Twitch, apparently, believes the issue is one that can be addressed – at least in part – by training new streamers.

On Twitch Creator Camp, the company is bringing in successful creators to help educate the would-be streamers on a variety of often-discussed topics. These insights will be shared as articles, videos and live streams. 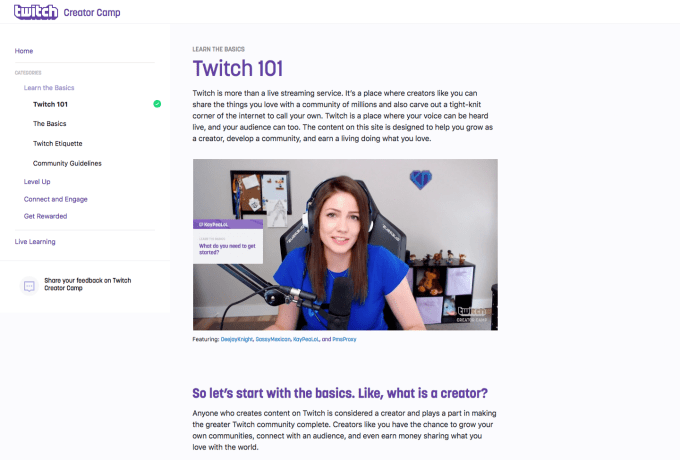 At launch, the site includes content focused on a variety of streaming best practices, including the basics of setting up a channel, building a brand, leveraging their stats, using Twitch features like emotes, badges and extensions, and more.

Streamers will also learn how to better network with others and engage their audience, as well as how to optimize their channel for monetization through subscriptions, merchandise, ads and sponsorships. 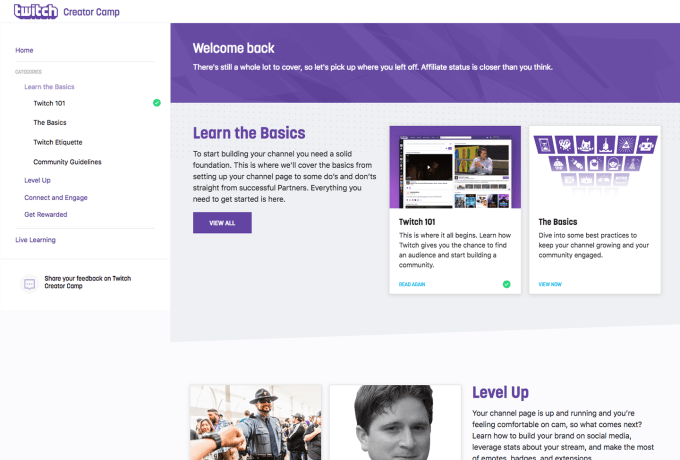 In addition, creators will begin live streaming on Creator Camp, starting on July 31 at 2 PM PT.

At this time, a number of Twitch Partners will answer general questions about streaming. A calendar of upcoming streams is also available on Twitch’s site, as the company aims to host weekly sessions going forward.

“Hosting a good stream isn’t easy. We’ve heard from many of our creators that they spend a lot of time searching for advice on effective tools, features, and techniques in order to make their broadcasts more engaging and to grow their communities,” said Jessica Messinger, Creator Growth Marketing Manager at Twitch, in a statement.

“Twitch Creator Camp makes things simpler by centralizing the most relevant information to a creator’s success, all of which is provided by Twitch and many of our successful Partners. We want to help our creators succeed and this is just the beginning,” she added. 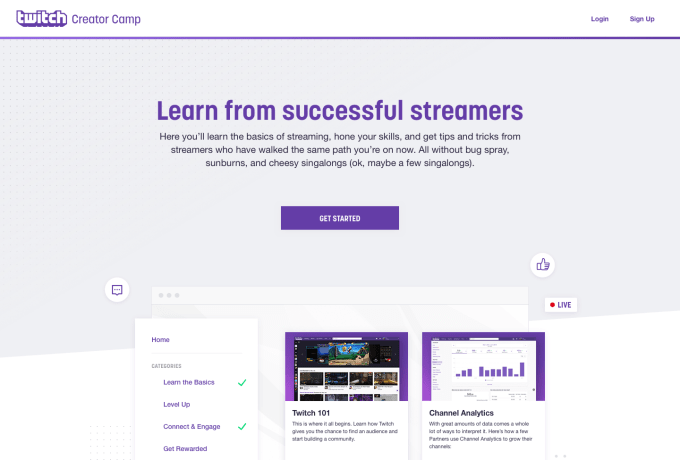 Twitch today has over 2.2 million broadcasters serving up streams on its site every month, which are consumed by 15 million daily active viewers who watch an average of 95 minutes of content daily. However, much of the on-site activity – just like on YouTube and elsewhere – is dominated by top creators.

Meanwhile, many of Twitch’s smaller streamers may already understand the basics and tips that Twitch’s Creator Camp is offering. For them, the issue is not one of following all the steps being laid out, but rather one of discovery.

Twitch has been working to address its discovery issues, too, having last month detailed a number of projects it’s working on across this front which are in various phases of development.

“We don’t believe Twitch should be a popularity contest” the company said at the time.

Twitch Creator Camp is open as of today, with the live streams starting at the end of the month.