Why do I write about tech? For James Ball, it’s because I want to write “soap-bubble light coverage” and “glossy coverage” “to counterbalance the ‘serious’ news of the day.” Ball, a former editor at The Guardian and the author of “Post-Truth: How Bullshit Conquered the World,” has a few choice words to say to reporters, columnists and analysts like me who cover the tech industry.

In a piece entitled “We need a new model for tech journalism,” Ball calls for nothing less than the dismantling of the current tech press, and its replacement by one far more critical of the corporate interests that dominate the industry.

Okay. But here’s the challenge: The whole idea of a coherent “tech press” seems to miss that technology has completely taken over the world. Want to cover Washington? Well, Alphabet is now the heaviest corporate spender on lobbying in DC. Want to cover foreign affairs? Well, U.S./China relations are squarely focused on issues of tech industrial policies, like China’s Made in China 2025 plan.

Every sector, every industry, heck, every decision is increasingly one in which technology either plays the prime role, or at least has major influence. Ball grasps that the work of a tech journalist is hard, writing that “Tech reporters are often expected to cover all facets of the industry.” Frankly, that was easier just a couple of years ago, before the iPhone and the global smartphone revolution made tech companies not just interesting, but powerful as well.

That to me is the burden of covering technology today. Tech now spans a spectrum from the proverbial two tinkerers in a garage to the most powerful corporations in the history of the planet. Most startup founders are broke, yet Jeff Bezos is worth $150 billion. Journalists need an incredible dynamic range to cover the range of these stories effectively.

Take startup coverage, which has always had a sort of effusive optimism that Ball clearly dislikes. Here’s the reality: startup life is awful. It’s stressful, emotionally draining and exhausting. And even after the founders make a total physical and mental commitment to a new product — a new way to see the world — the most common case is for literally nothing to happen. The average startup dies an anonymous death, without even a Medium “It’s been an incredible journey” post.

That’s not news. In fact, tech journalists could write “ambitious startup fails again!” stories pretty much every hour of the workweek and not run out of companies and founders to write about.

The reason people read about early-stage tech startups, indeed, why they want to read any news, is to peer into the exceptional and differentiate it from the mundane. They want to know why this startup succeeded when more than a thousand others fell by the wayside. Tens of thousands of high-growth startups are founded every year across the world, and yet, only a handful represents the complete economic value of the industry. That’s the story. I remain unabashed about covering success over failure (although learning from defeat has its uses). 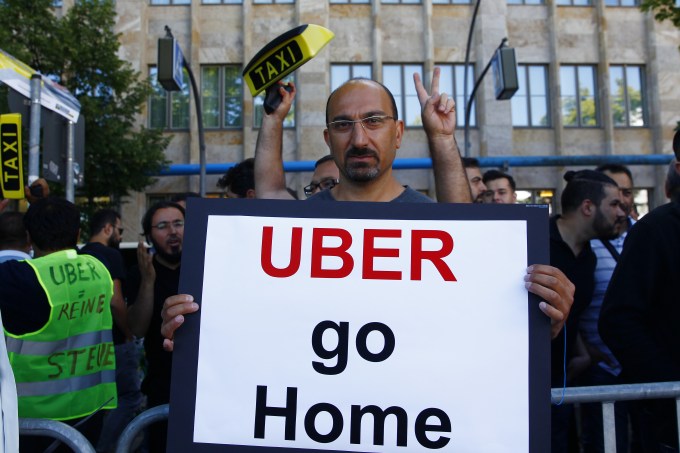 As startups grow, they should face more trenchant criticism about their effects on society. (Photo by Michele Tantussi/Getty Images)

Yet, our lenses need to change over time as these startups mature. It’s one thing to cover Airbnb back in 2008, and discuss this startup where a couple of founders are trying to help people attend the Democratic National Convention in Denver that year. But Airbnb is now a multi-billion dollar valued company, and deserves far more critical analysis than it did a decade ago. We saw this sort of narrative adaptation over time with Uber, and obviously with Theranos. But there are at least a dozen other companies that deserve fairly strict scrutiny of their actions on a daily basis, but often get limited attention.

To me, a renewed “tech press” needs to have both optimistic and pessimistic angles. It needs to cover very early startups with soft gloves while also knowing when to throw a punch as those startups mature and gain power.

Perhaps even more importantly, we need to start appreciating the complexity of our current environment. Alphabet can face a multi-billion dollar fine from the Europeans for antitrust, while also fighting a tooth-and-nail war with ISPs like Verizon and AT&T over net neutrality. These companies are so big, and touching so many facets of our lives, that there are no brushstrokes that can paint a simple abstraction of these companies. Some of their actions may be “good” or “bad,” but only deeper analysis is going to get us any purchase on the effects of these companies on our lives.

Ball and I completely agree that the coverage of technology increasingly requires specialization. No one can be informed about what is happening across the industry anymore, let alone cover it all. Indeed, I am not even sure a single human being can truly cover companies like Alphabet and Facebook. I am not sure their executives and boards know the complete extent of what is happening at their companies. We need more depth, more focus and more quality criticism if we are to build an effective press.

I am reminded a bit of Sara M. Watson’s work around “constructive tech criticism.” She wrote in her report, “Acknowledging the realities of society and culture, constructive criticism offers readers the tools and framings for thinking about their relationship to technology and their relationship to power.” To me, that’s a great mission statement for what coverage should do today. It requires us to renew our focus: to inform, to simplify and complicate as necessary, and to bring attention to the most salient issues of the day. That’s why I write, and why we should all be writing.