There was a time not so long ago when nine-figure venture capital rounds weren’t a near-daily feature of tech business news.

But now funding rounds of $100 million or more cross the wires with stunning frequency.

The era of supergiant rounds is now the new normal. This is attributable, in part, to billions of dollars flowing into new venture capital funds — the largest of which are raised by the oldest, most entrenched firms — and competition from relative newcomers, like SoftBank.

Q2 2018 may have set new records for worldwide VC deal and dollar volume in this post-dot com cycle, but that belies an important fact: Investors are dumping the bulk of capital into a relatively small number of companies. The rise of supergiant rounds wound up in a “takeover” of the market.

The chart below shows the proportion of capital raised in rounds of $100 million or more, tracing the period between Q1 2017 and the end of Q2 2018. 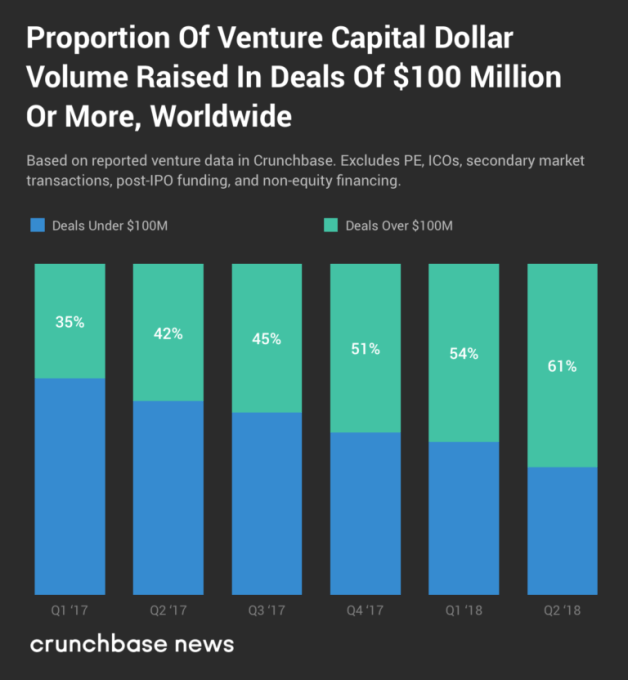 Just a little over a year ago, in Q1 2017, nine and 10-figure venture capital deals accounted for a healthy 35 percent of global dollar volume. Five quarters later, in Q2 2018, $100 million-and-up deals accounted for a majority — some 61 percent — of equity funding into upstart technology companies.

It’s not just that these mega-rounds are eclipsing smaller counterparts as a percent of dollar volume totals. Supergiant rounds also appear to be driving most of the growth in reported dollar volume, as the chart below shows. 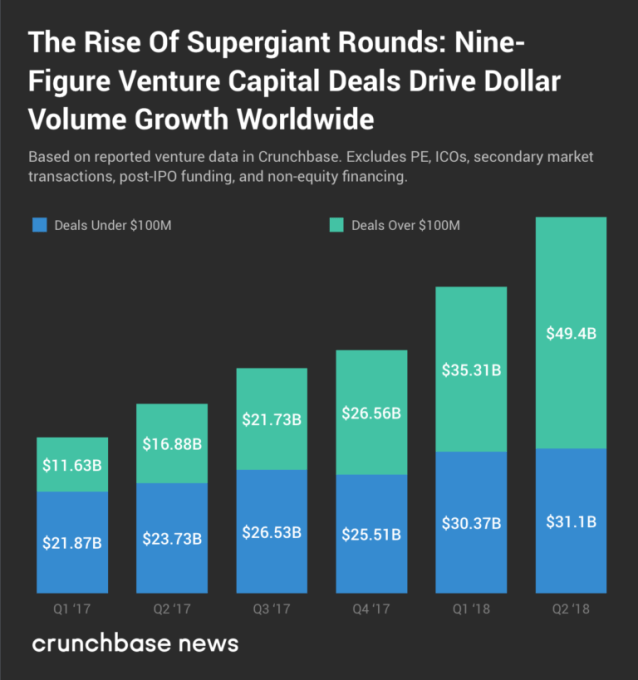 Between Q1 2017 and Q2 2018, reported dollar volume in sub-$100 million deals grew by around 42 percent. By that same token, dollar volume in nine and 10-figure venture deals ballooned by about 325 percent over that stretch of time.

Granted, this is all based on recorded data in Crunchbase. And like all private-market databases, Crunchbase is subject to some reporting delays. Those delays primarily affect seed and early-stage rounds, which tend to be smaller. Still though, unless billions of dollars in small rounds get added to recent quarters, these figures are likely to remain relatively stable.

The obvious question to ask here: Why are $100+ million rounds more prevalent these days, and what explains their slow-motion takeover of the global venture capital market?

As with most things, the answer is, “it’s complicated, and it depends.” The rise and reign of supergiant rounds is a phenomenon that emerges from a confluence of different factors:

It really does seem like mega-rounds are here to stay. And, based on just the last couple of weeks, it looks like the third quarter is likely to see a continuation of the trend.

Bigger funds are able to invest in bigger rounds. And as competitors raise big rounds, it becomes more strategically important for companies to also raise big rounds. It’s a positive feedback loop. What stops the fundraising arms race, though, remains to be seen.