For people who make investment decisions based on revenues and projected earnings, biotech IPOs are kind of a non-starter. Not only are new market entrants universally unprofitable, most have zero revenue. Going public is mostly a means to raise money for clinical trials, with red ink expected for years to come.

That pattern may be one reason the venture capital press, Crunchbase News included, tends to devote a disproportionately small portion of coverage to biotech IPOs. It’s more exciting to watch a big-name internet company pop in first-day trading or poke fun at an underperforming dud.

But with our fixation on all things tech, we’re missing out on the big picture. There are actually a lot more biotech and healthcare startup IPOs than tech offerings. In the second quarter of this year, for instance, at least 16 U.S. venture-backed biotech and healthcare companies went public, compared to just 11 tech startups. In three of the past four years, bio offerings outnumbered tech IPOs, according to Crunchbase data.

In the following analysis, we attempt to get up to speed on the pace of biotech offerings, assess where we are in the cycle and spotlight some of the rising stars.

As mentioned above, U.S. bio IPOs outnumber tech offerings in most years. However, the bio cohort raises less total capital, partly because the largest technology IPOs tend to be much bigger than the largest bio IPOs. In the chart below, we compare the two sectors over the past four years. 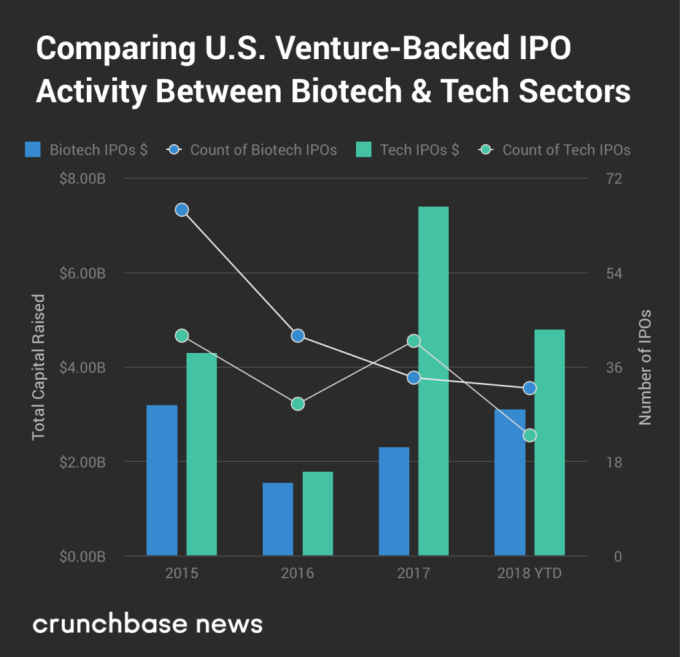 Globally, the numbers are much higher. Using Crunchbase data, we’ve put together a chart looking at global VC-backed biotech and healthcare IPOs over the past four years. While we’re just over halfway through 2018, biotech and health IPOs have already raised more money than in any of the prior three full calendar years. 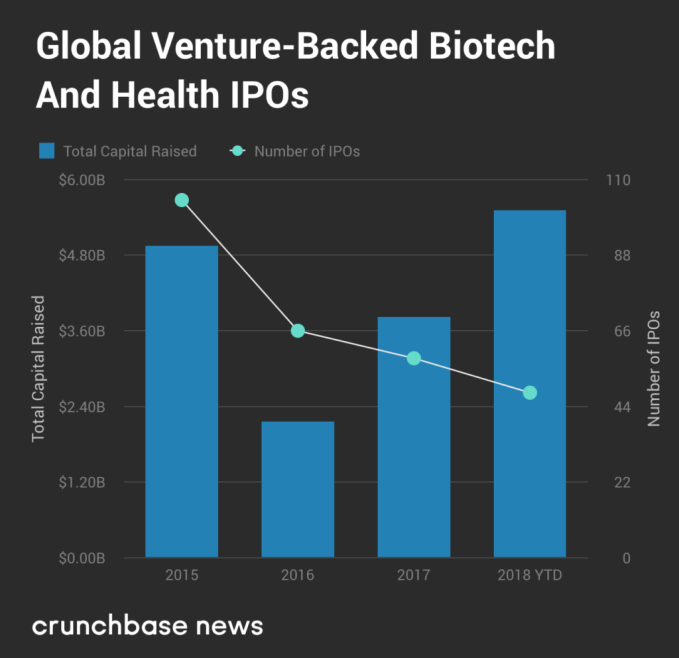 It’s pretty clear we’re in an upcycle for all things startup-related. VCs are flush with cash, late-stage rounds are ballooning in size and IPO and M&A action is picking up, too.

So what does that mean for bio IPOs? Is the uptick in the pace and size of offerings mostly a result of bullish market conditions? Or is the current slate of pre-IPO candidates more compelling than in the past?

We turned to Bob Nelsen, co-founder of ARCH Venture Partners, one of the top-performing biotech investors, for his take, which is that it’s a “fundamentals driven, cycle amplified” IPO boomlet.

More companies are launching well-received IPOs because the pace of startup innovation is faster than in the past. Nelson calls it “the result of the previous 30 years of investment and innovation in biotech that has finally led to essentially data-driven innovation.” That’s leading to more curative treatments, disease-modifying therapies and preventative technologies.

Yet we’re also in a bullish segment of the market cycle for biotech. That’s prompting companies that might have stayed private under other conditions to give going public a shot. It’s also providing bigger outcomes for emerging companies that were already on the IPO track.

The latest example of a big outcome IPO is Rubius Therapeutics, which develops drugs based on genetically engineered red blood cells. This week, the five-year-old company raised $241 million at an initial valuation of over $2 billion, making it the largest bio offering of 2018. The Cambridge, Mass. company, which previously raised nearly a quarter-billion-dollars in venture funding, is still in the pre-clinical trial phase.

This year has delivered several other good-sized offerings as well, including drug developers Eidos Therapeutics and Homology Medicines, recently valued around $800 million each, along with Tricida, valued around $1.2 billion. (See the full list of 2018 global bio and health offerings here.)

As for aftermarket performance, that’s been up and down, but includes some big ups. Last year, biotech led the pack for best-performing IPOs on U.S. exchanges. The sector accounted for four of the six top spots, according to Renaissance Capital, led by drug developers AnaptysBio, Argenx and UroGen, along with Calyxt, an agbio startup.

While things are already up, bio VCs, generally an optimistic bunch, see several reasons why bio IPOs could go higher.

Nelson points to what he sees as the lagging pace of in-house innovation at big pharma and biotech players. Increasingly, they need to acquire startups and recently public companies to stay competitive and build out new product pipelines.

There is also tons of fresh capital earmarked for healthcare startups. In the U.S. in 2017, healthcare-focused venture capitalists raised $9.1 billion. That figure was up 26 percent from 2016, per Silicon Valley Bank.

More dollars also are flowing from venture firms that invest in a mix of tech and life sciences through a single fund. That list includes well-established VCs with dry powder to invest, including Polaris Partners, Founders Fund, Kleiner Perkins and Sequoia Capital.

Still, Nelson observes, deep into an IPO bull market, the average quality of offerings does tend to decline. That said, he’s been through similar inflection points in previous cycles and “for the same point in the cycle, the quality is markedly higher.”