YouTube highlighted its growth and promised better communication with creators about its tests and experiments, the company announced today in its latest of an ongoing series of updates from CEO Susan Wojcicki focused on YouTube’s top five priorities in 2018. The majority of her missive today – which was also released in the form of a YouTube video – were wrap-ups of other announcements and launches the company had recently made, like the new features released at this year’s VidCon including Channel Memberships, merchandise, and Famebit.

However, the company did offer a few updates related to those launches, including news of expanded merch partnerships. But YouTube didn’t detail the crucial steps it should be taking to address the content issues that continue to plague its site. 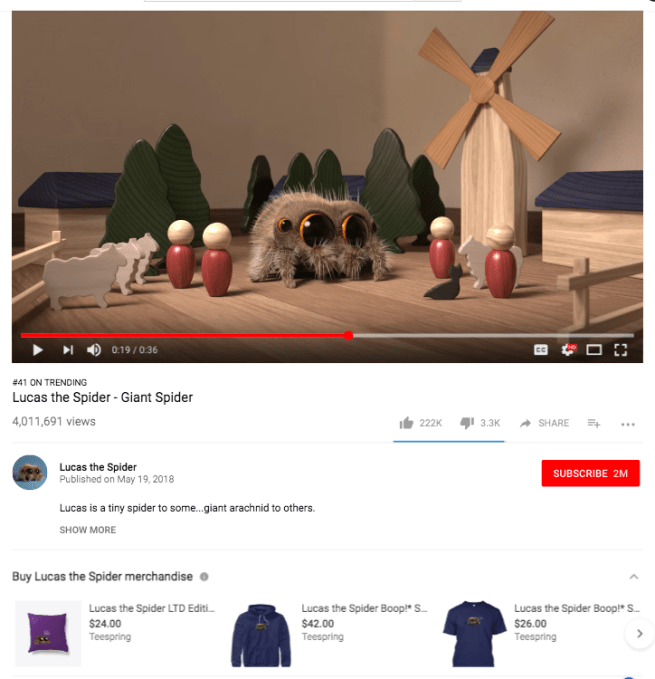 At present, YouTube is partnered with custom merchandise platform Teespring, which keeps a cut of the merchandise sales while YouTube earns a small commission. The company didn’t say which other merchandise providers would be joining the program.

YouTube’s Famebit, which connects creators and brands for paid content creation, is also growing. YouTube says that more than half of channels working with Famebit doubled their YouTube revenue in the first three months of the year. And it will soon launch a new feature that will allow YouTube viewers to shop for products, apps, and tickets right form the creator’s watch page. (This was announced at VidCon, too.)

There was little attention given to brand safety in today’s update, however, beyond a promise that this continues to be one of YouTube’s “biggest priorities” and that it’s seeing “positive” results.

In reality, the company still struggles with content moderation. It even fails to follow-up when there’s a high-profile case, it seems. The most recent example of this is YouTube’s takedown of the “FamilyOFive” channel this week.

The channel’s creators, Michael and Heather Martin, are serving probation in Maryland after being convicted of emotionally and physically abusing their children in “prank” videos for their prior DaddyOFive channel. They lost custody of their two younger children as a result.

Unbelievably, the family returned to YouTube as FamilyOFive and FamilyOFive Gaming, and continued to produce videos reaching a combined 400,000+ subscribers. Seemingly without remorse for their past actions, their new channel featured more abuse – one of their children took a shot to their groin in one video, and another was harassed to the point of a meltdown in another.

The family has claimed it’s all “entertainment,” but the justice system obviously disagreed. It’s outrageous that convicted child abusers would be allowed to continue to upload videos of their children to YouTube. The site needs to have much stricter policies not only around bans, but about the use of children in videos entirely. Kids do not have the autonomy to make decisions about whether or not they want to be filmed, and aren’t able to comprehend the long-term impacts of being public on the internet.

While FamilyOFive is an extreme example, YouTube is still filled to the brim with parents exploiting their kids for cash – the stage moms and dads of a new era, raking in the free toys, products, and cash from brands who see YouTube as the new TV, and its creators and their children as the new, less regulated actors.

Unfortunately for children, existing child actor laws that protect children from exploitation and set aside some portion of their earnings outside of parents’ reach haven’t always applied to YouTube stars. YouTube now complies with local child labor laws, it says, but it’s not involved in enforcement. And even with a policy in place, it’s clearly not enough to dissuade parents from filming their kids for cash.

YouTube’s post today also highlighted other growth metrics. It noted it now has 1.9 billion logged-in monthly users, who watch over 180 million hours of YouTube on TV screens every day. Overall interactions, such as likes, comments and chats, grew by more than 60% year over year, and live streams increased by 10X over the last three years. Over 60 million users click or engage with Community Tab posts.

YouTube says it answered 600% more tweets through its official Twitter handles (@TeamYouTube, @YTCreators and @YouTube) in 2018 than in 2017 and grew its reach by 30% in the past few months.

And the company noted its plan to expand Stories to those with more than 10,000 subscribers, plus the launches of its new Copyright Match tool, screen time limitation features, and YouTube Studio’s new dashboard which will roll out in 76 languages in the next two weeks.