India has quickly become ground zero for the smartphone wars. Last year, the country surpassed the U.S. to become the world’s No. 2 smartphone market, and manufacturers are falling over themselves to plant a flag.

Samsung and Xiaomi have been the two biggest winners in recent quarters, battling it out for the top spot. Earlier this year, the latter edged out the former, but the battle has remained neck and neck for the huge — and growing — market. According to new numbers from Canalys, both companies shipped 9.9 million smartphones for Q2 2018.

Xiaomi held onto the top spot — though just barely, with Samsung growing 47 percent year-over-year. That’s the Korean manufacturer’s biggest growth spurt in the country since late-2015. Look, here’s a graph. 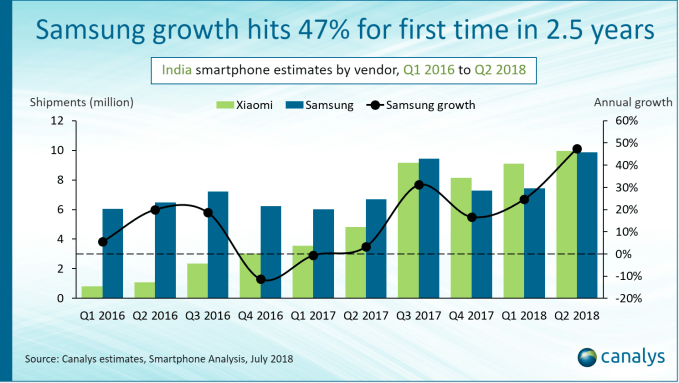 Combined, the two manufacturers comprise 60 percent of shipments in India for the quarter. Vivo and Oppo round out the top four, making Samsung the only non-Chinese company vying for a top spot. The company announced recently that it will be doubling down its efforts in the country with a factory it’s deemed the world’s largest.

ASUS has seem some growth in the country, as well, tripling since the previous quarter. Apple’s shipments, meanwhile, have dipped around 50 percent year-over-year, according to the firm, as the company adjusts its strategy in the country.

“Apple’s paring back of distributor partners and move to a ‘brand-first, volume-next’ strategy will reap rewards as it will ensure better margin per device,” says Rushabh Doshi of Canalys. “Getting priorities right will be important to smartphone vendors, and it will be a choice between profitability and volume growth.”