Microsoft is capping off a rather impressive year without any major missteps in its final report for its performance in its 2018 fiscal year, posting a quarter that seems to have been largely non-offensive to Wall Street.

In the past year, Microsoft’s stock has gone up more than 40 percent. In the past two years, it’s nearly doubled. All of this came after something around a decade of that price not really doing anything as Microsoft initially missed major trends like the shift to mobile and the cloud. But since then, new CEO Satya Nadella has turned that around and increased the company’s focused on both, and Azure is now one of the company’s biggest highlights. Microsoft is now an $800 billion company, which, while still considerably behind Apple, Amazon and Google, is a considerable high considering the past decade.

In addition, Microsoft passed $100 billion in revenue for a fiscal year. So, as you might expect, the stock didn’t really do anything, given that nothing seemed to be too wrong with what was going on. For a company that’s at around $800 billion, that it’s not doing anything bad at this point is likely a good thing. That Microsoft is even in the discussion of being one of the companies chasing a $1 trillion market cap is likely something we wouldn’t have been talking about just three or four years ago.

The company said it generated $30.1 billion in revenue, up 17 percent year-over-year, and adjusted earnings of $1.13 per share. Analysts were looking for earnings of $1.08 per share on revenue of $29.23 billion. 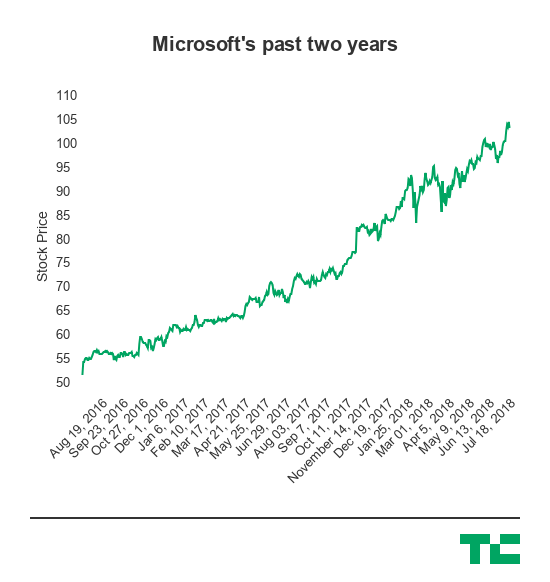 So, under Nadella, this is more or less a tale of two Microsofts — one squarely pointed at a future of productivity software with an affinity toward cloud and mobile tools (though Windows is obviously still a part of this), and one that was centered around the home PC. Here are a couple of highlights from the report: