The Ken, a subscription news startup from India, is moving through the gears after it raised $1.5 million in fresh funding to build out its media business.

We first profiled the company in March 2017 and now, nearly 18 months later, the startup has raised its Series A round led by Omidyar Networks, which has invested in new media companies such as Rappler in the Philippines. Other investors included Yuj Kutumb, the Family Foundation headed by Xander Group founder Sid Yog, and existing and new angel investors.

Rohin Dharmakumar, co-founder and CEO of The Ken, told TechCrunch that the company still has more than half of its $400,000 seed round in the bank, but it has raised this additional cash to go after new opportunities.

The Ken has made its mark by publishing one thoughtfully reported long-form story each day. An annual subscription is priced at Rs 2750 (around $43) in India or $108 overseas, there are also options for quarterly and single-story access. Thus far it has covered technology startups, healthcare and business verticals but now it is aiming to expand that focus.

“We were a single product experience,” Dharmakumar said. “But this funding allows us to slowly transition The Ken to a media brand with a portfolio of products that gives our readers different things to connect to on different days.”

“We don’t want to replace newspapers, we want to complement them [and] be the deep read that you take alongside the newspaper,” Dharmakumar added, explaining that The Ken will never churn out “dozens” of stories each day.

“We do one story [per day] right now and we might go to two or three, but we’ll organize it so people can read different slices. Increasingly it’s our belief that we don’t want to bombard readers with too much stuff to read each day [because] we can’t do justice to our stories and readers can’t process the information,” he said. 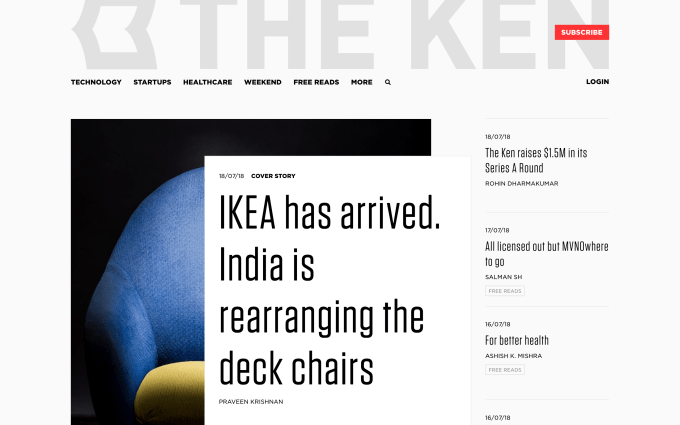 Beyond expanding the scope of reporting, The Ken is looking to cover international topics for its India-based audience and it is also dabbling with different types of storytelling.

That’s already manifested in a weekend edition — which Dharmakumar said has a very different tone — but the startup is looking into audio storytelling, podcasts and other mediums that allow it to “stay true to our brand of journalism.” Video is, at this point, off the table although it could be used in conjunction with stories but not standalone.

Dharmakumar noted that The Ken may also experiment with events over the next twelve months, but he was quick to point out that the focus should be on bringing value to subscribers and not simply pulling in cash. Events are, of course, can be hugely lucrative for media companies — it’s a key revenue driver for TechCrunch among others, for example — but his concern is that it takes the company down a road it doesn’t want to be on.

“It’s easy to get sidetracked by events,” Dharmakumar said. “We didn’t start this business to do events.”

On the subject of revenue, however, The Ken appears to be doing well even though it isn’t divulging specific numbers at this point.

The company proudly announced it was cash flow positive in April 2018 and Dharmakumar revealed that revenue for its most recent quarter was doubled the previous quarter, and up 3X on the period one year previous. A key part of that seems to be group subscriptions. The Ken has developed a self-serve option that allows corporates to sign-up staff on their dime, while the launch of a discounted student price has also led major educational institutions, including Havard Business School, to signing up students en masse.

“We’ve proved [the naysayers] wrong and with a team of 15 people — we pay market salaries to all our journalists— we became cash flow positive,” Dharmakumar said. “We’re on the cusp of a significant uptick in subscribers. More and more people are discovering us and realizing ‘Hey this price isn’t so bad and the journalism they commit to delivering is good.’”

That team is spread across three offices and the headcount looks set to jump to 30 over the next few months with The Ken in full on hiring mode right now, its CEO said.

You can read more about The Ken’s new funding round on its website here — that post is free to view, of course.