AWS’s Snowball Edge devices aren’t new, but they are getting a new feature today that’ll make them infinitely more interesting than before. Until now, you could use the device to move lots of data and perform some computing tasks on them, courtesy of the AWS Greengrass service and Lambda that run on the device. But AWS is stepping it up and you can now run a local version of EC2, the canonical AWS compute service, right on a Snowball Edge. 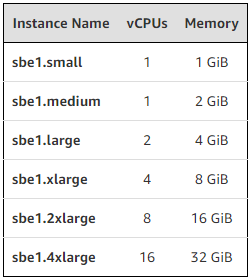 With that, you can now take one of these devices, put it right on your factory floor and run all of your standard Amazon Machine Images on it. That cuts down on bandwidth because you can either handle all of the processing on the device or pre-process it before you send it on to the cloud. And to manage it, you simply rely on the regular AWS management console (or use the command line). Every Snowball Edge comes with an Intel Xeon processor that runs at 1.8 GHz and can support any combination of instances up to 24 vCPUs and 32 GiB of memory.

Because you could use any server for most of these functions, being able to manage all of your services from one console — and have it work just like any other machine in the cloud — is the selling point here. It’s worth noting that this was also the original idea behind OpenStack (though setting that up is far more complicated than ordering a Snowball Edge) and that Microsoft, with Azure Stack and its various edge computing services, offers similar capabilities.

Using a Snowball Edge isn’t cheap either, though. On-demand fees for jobs that are mostly about data transfer start at $500, but if you want to keep a machine for a year, that’ll set you back at least $15,330. Chances are then, most companies will only use the extra compute power on the machine to manipulate some of their data before they send the Snowball Edge back to Amazon to import their data, though to be fair, $15,330 is still much cheaper than some competing systems.