As Slack continues to grow its paid business users, the company is looking for ways to help customers build integrations that make sense for the work they do.

Slack announced today that it has acquired Robots and Pencils’ Missions, an app that allows Slack users to build tools to automate simple routines without code. Terms of the deal weren’t disclosed.

Paid users are already big fans of Slack integrations.There are currently 1,500 apps available in the Slack app directory. The company says that 94 percent of users in that bracket use apps and integrations, while 65 percent of teams have built their own. Building an integration certainly isn’t an easy process for non-tech teams to handle; Missions is focused on a more visual flow that ditches some of the complexity.

Missions’ technology lets people create workflows for tasks that they might normally have to talk about inside Slack and then carry out the process off-chat. With Missions, Slack hopes that users can help teams boost productivity by making things more simple for a variety of repeatable processes. 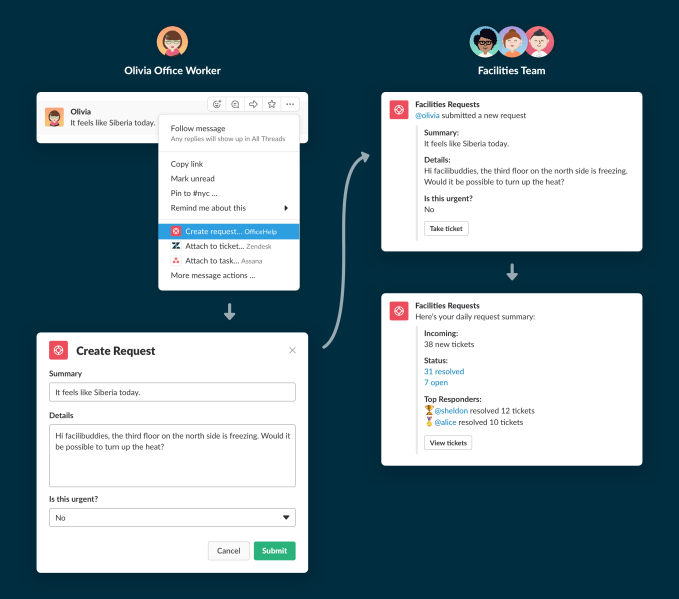 Onboarding seems to be an area where Slack sees a lot of potential for this tech, ensuring that new employees know which documents they need to fill out, who in the company they need to meet and other tasks they’ll have to complete. Other potential areas for the app to help users include managing approvals and rejections in the hiring process, as well as internal ticketing.

The company says they’ll be supporting Missions’ customers for free for the next few months as they begin to build the technology into their platform. When can you start playing with this tech? The company said they’ll have more to share “later this year.”