With the upcoming release of iOS 12, Apple is introducing a new app called Shortcuts that will allow users to build custom voice commands for Siri that can be used to kick off a variety of actions in apps. While some apps will directly prompt users to add a Shortcut to Siri, the new Shortcuts app will offer more shortcut suggestions to try, plus the ability to create your own shortcuts and workflows. Now, there’s a new resource for shortcut fans, too – Sharecuts, a directory of shortcuts created and shared by the community.

The site is still very much in the early stages.

Plus, iOS 12 is still in beta testing itself, and the Shortcuts app can only be installed by developers who request access via an invite.

But by the time iOS 12 releases to the public later this fall, Sharecuts’ directory will be filled out and a lot more functional.

The premise, explains Sharecuts’ creator Guilherme Rambo, was to make an easily accessible place where people could share their shortcuts with one another, discover those others have shared, and suggest improvements to existing shortcuts.

“I was talking to a friend [Patrick Balestra] about how cool shortcuts are, and how it should be easier for people to share and discover shortcuts,” says Guilherme. “He mentioned he wanted to build a website for that  – he even had the idea for the name Sharecuts – but he was on vacation without a good internet connection so I decided to just build it myself in one day,” he says.

The site is currently a bare bones, black-and-white page with cards for each shortcut, but an update will bring a more colorful style (see below) and features that will allow users to filter the shortcuts by tags, vote on favorites, among other things. 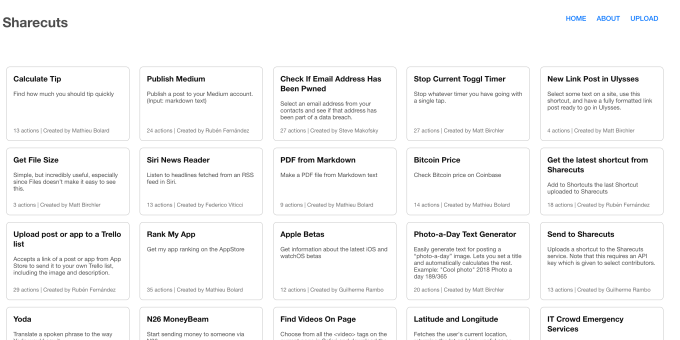 Guilherme says while the backend is being built to support a larger number of users, only a few people have been invited to upload for the time being. But in the upcoming release, the site will offer a “featured” selection of shortcuts chosen by some well-known members of the Apple community who will serve as curators.

The uploads to the site will also be moderated in the future, to prevent malicious shortcuts and spam from being included in the directory.

The site itself isn’t a new business or startup, Guilherme says, just a side project for now.

It’s written in Swift and open-sourced on GitHub so others can contribute. The page already has a list of ideas for improvements to the Sharecuts site, including the new design, plus more ways to refine, sort, and organize the shortcuts.

It remains to be seen how popular Siri Shortcuts will be with the mainstream iPhone user base.

With iOS 12, Apple is turning its iPhone into an “A.I. phone,” but I believe the Shortcuts app and workflows will remain a power user feature for some time. Mainstream users will gradually warm up to the idea of customizing their Siri interactions by getting prompted to create voice commands by their favorite apps. (E.g. Your coffee shop’s mobile ordering app may push you to add a “Coffee time!” shortcut to Siri.)

Over time, that may lead them to iOS 12’s Shortcuts app to do even more. 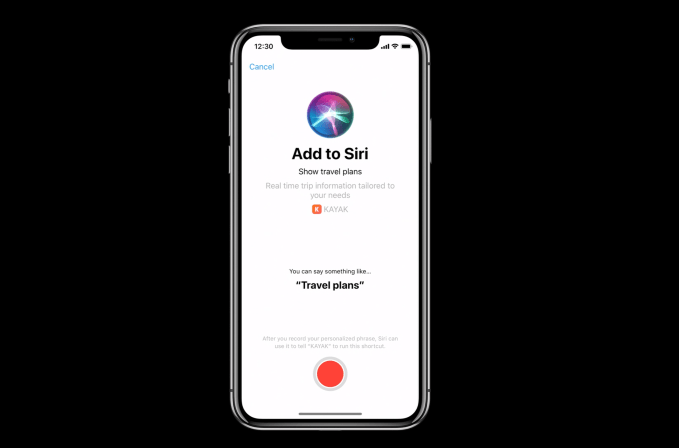 But in the near-term, power users will be busy taking advantage of the new Shortcuts app and Siri features to test the powers of Shortcuts. And with Sharecuts, all the other shortcuts enthusiasts can benefit from their enthusiasm and activity, too.

If you already have the beta Shortcuts app installed, you can try out some of the shortcuts featured on Sharecuts today. A couple of the interesting picks include the Siri News Reader which will read you headlines from an RSS feed, the Bitcoin Price checkers, and an always useful tip calculator.

(Also: thanks @_inside for letting me upload this shortcut to his @sharecutsapp directory. You can find it here: https://t.co/1hBmLB3qhb) pic.twitter.com/PZolKQlKrg

Above: The news reader shortcut, from Federico Viticci

Those interested in contributing to Sharecuts in the future can register here for an invite.