Despite the massive glitches that prevented online shoppers from being able to browse and buy from Amazon’s Prime Day sale yesterday, the retailer is this morning claiming its Prime Day sales in the U.S. are “bigger than ever,” and grew faster than last year’s Prime Day within the first ten hours of the annual sales event. In addition, customers bought “millions” of Amazon devices, including Amazon’s top sellers Fire TV Stick, Echo Dot, Fire 7 tablet, as well as the Instant Pot 6 Qt, and the Lifestraw Personal Water Filter for Hiking, Amazon said.

Amazon acknowledged the website’s struggles in a statement published on Twitter yesterday, saying it was “working to resolve this issue quickly.” But it also noted that customers had ordered more items in the first hour of Prime Day compared with the first hour the year prior.

The retailer this morning again referenced the site issues which prevented shopping (potentially to the tune of millions in lost sales) but has not offered details as to what, specifically, went wrong.

“It wasn’t all a walk in the (dog) park, we had a ruff start – we know some customers were temporarily unable to make purchases,” the company said in a statement released today. (The dog puns are references to the 404 pages featuring the dogs of Amazon that appeared when the site was non-functional.)

Though the Prime Day sale continues today through 11:39 PM PT, not everyone may be willing to give Amazon a second shot –  some angry customers were already threatening to cancel their Prime memberships and shop elsewhere, according to reports.

While Amazon’s site has experienced glitches on previous Prime Days due to the massive influx of traffic, yesterday’s downtime was unprecedented.

The problems with Amazon’s site began shortly after Prime Day kicked off at 3 PM ET on Monday, June 16.  The landing page for Prime Day didn’t work, and when links were clicked, visitors were often sent to error pages. The deal navigation page was also down for an extended period of time, which impacted shoppers’ ability to browse the items on sale. And when shoppers did manage to load items into a cart and checkout, they would sometimes get errors there, too.

Typically, users may wait 2 to 3 seconds for a website home page to load, but during the Prime Day outage, the home page was taking 6, 7 and even as high as 8, 9 or even 10+ seconds to load on the desktop. And on mobile, webpage load times were even slower – reaching as high as 30 seconds at times across the U.S.

Error pages (the ones with the Amazon dogs) were also appearing more than usual, as indicated in the chart above.

In addition, even when the Amazon.com homepage became accessible to users, product search was not working and shoppers would see an error message (below) in some instances. This continued from 4:15 PM to 10 PM ET nationwide. 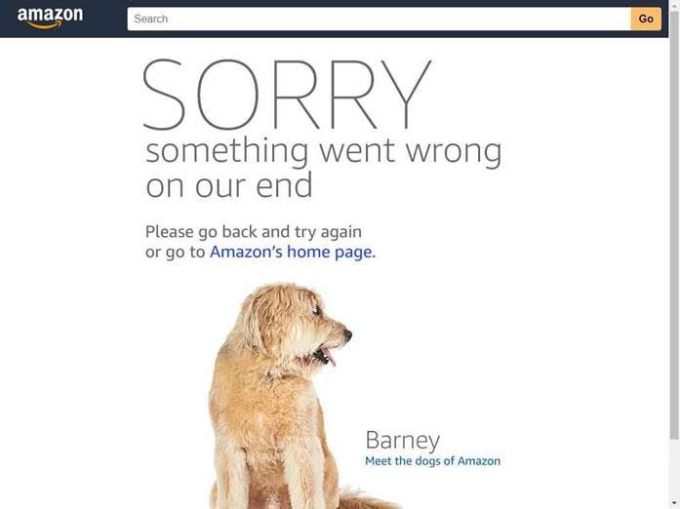 The situation this morning is resolved, according to Catchpoint’s tests, but if an influx of shoppers return to get the sales they couldn’t manage yesterday, it could impact the site again.

Prime Day was estimated to bring in $3.4 billion in sales, up over 40 percent from last year, Bloomberg had reported.

It’s also delivering a record number of voice-based sales, according to a report from Brian Roemmele, who cites data from sources inside Amazon, he tells TechCrunch.

There was a ~38% increase in Alexa assisted transactions!

This is a new high watermark for #VoiceCommerce and just like last year cemented new shopping behaviors.

Got a business? Get a https://t.co/O6CgLgxfPl today.

It remains to be seen if Amazon will still meet those estimates, and what – if anything – it may do to placate brands whose limited-time deals passed by during the outage.