Uber is aiming to perfect the art of the pickup with three features it says minimize cancellations. Guaranteed pickup windows boost confidence that you’ll make your flight, and give you a credit of $10 if your scheduled ride is late. Pre-written messages let drivers and riders let each other know they’ll “Be right there” or “I’ve arrived” with a single tap.

And most flashily, three years after I suggested Uber let you hold up a colored screen so your driver could find you amidst a crowd of hailers, it’s introducing Spotlight. Each driver gets assigned a semi-unique color gradient to look for. Hit the Spotlight button, that color takes over your screen, and you can wave it to help your driver locate you. 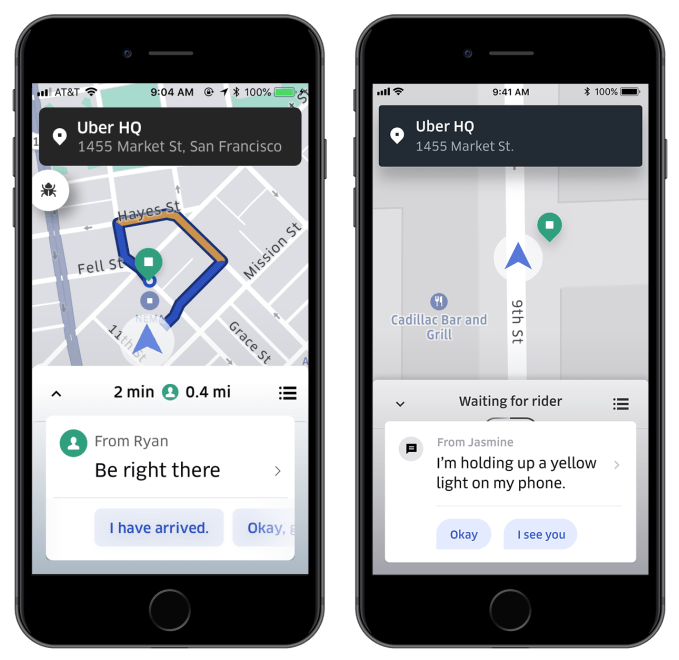 These optimizations show the depths Uber is willing to go to shave seconds off of pickups. That can reduce unpaid waiting time for drivers while boosting the number of rides they complete per hour for the startup. And the peace of mind that they’ll be able to hop in right when they’re ready could lure riders away from competitors as Uber dukes it out across the globe. The updates are rolling out on iOS and Android in the U.S. and Canada today.

“Human-to-human interaction is hard. Driver-initiated cancellations after the driver has arrived at the pickup point are particularly stressful,” Uber senior product manager for rider experience Ryan Yu tells me. But in tests of the new quick messages features, he said “We found cancellations on both sides reduced significantly, especially for drivers after they’ve arrived.”

We can only hope this level of attention to detail will be applied to optimizing its internal company culture — a hope shaken by this month’s resignation of Uber’s head of HR Liane Hornsey after a probe into how she handled racial discrimination at the company, and the NYT’s report of insensitivity complaints about COO Barney Harford.

Uber has been steadily adding little improvements to the pickup process over the years. Here’s a quick, abridged list:

There are three upgrades in particular that serve as the foundation for today’s updates. 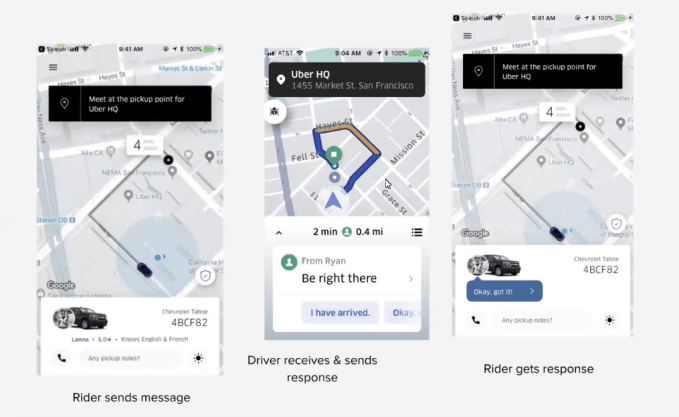 In-app chat between riders and drivers makes it so you don’t have to use SMS. Uber could only anonymize your number in some markets, creating privacy concerns, and SMS could be cost-prohibitive in some parts of the world. Uber messaging launched in mid-2017, and could be read aloud to the driver and replied to with a thumbs-up emoji to reduce the chance of distracted driving. Lyft still uses SMS for comparison.

Now both users and drivers will see the most common messages pre-written and sendable with the touch of a button so they don’t have to type. “Drivers noted that they were more reassured when their rider actually sent them a message,” said Yu, which can keep them from cancelling if the rider needs a little more time to get to the pickup spot. I asked if automatic translation would be available here, so if a driver in Brazil sent an American user “eu cheguei,” it’d show up as “I have arrived.” Yu told me “Translations are on the road map. We’re figuring out how to best pair them alongside voice.”

Uber added scheduled rides in mid-2016 shortly after Lyft did the same. You can plan a ride up to 30 days in advance, but you’re still subject to surge pricing in the moment. At least now you’ll get $10 credit if the driver is late. Unfortunately, the pickup window Uber showed me in the demo was 15 minutes, though Yu said it may very by region. I sometimes only make my flights by 10 minutes, and since my pickup ETA in San Francisco is typically only 3 to 5 minutes, I’m probably better off just booking the ride when I’m ready. 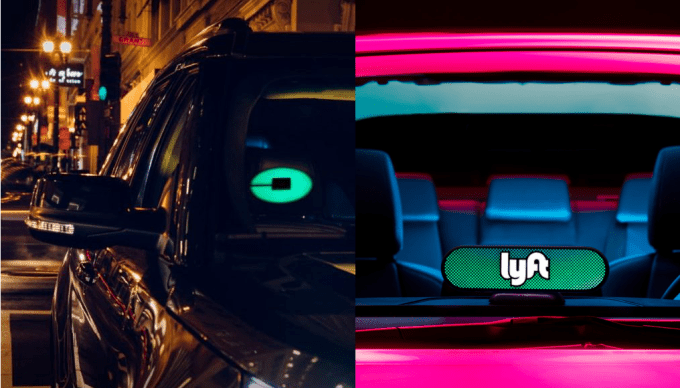 Back in 2015, I suggested that “Uber could offer some signal on the driver or passenger’s phone to help them find each other.” A week later it announced it would start testing Spot, which let users pick a color that would light up on an LED bar installed on driver’s windshields. In November 2016, Lyft launched its Amp dashboard light that assigned a random color riders could look out for. A month later, Uber’s Spot had evolved into the dashboard Beacon light that lets users pick the color and is now available in 14 cities.

Today’s update gives riders a light too, which is great if you’re one of dozens of people waiting outside a concert or sports game trying to find their Uber. Hit the Spotlight button, and you’ll get instructions to wave your colored screen in the air. Drivers are permanently assigned a color that stays constant across trips so they can train themselves to look out for it.

“Spotlight is meant to supplement Beacon. Not all drivers will have a Beacon, and we want to pass that to two-way communication,” says Yu. But since the Beacon dashboard lights are always visible, Uber says that if a driver has one, users won’t see the Spotlight option and will instead just be able to choose the Beacon’s color.

Together, these features should eliminate most pickup problems. We’ll see if Uber’s competitors and international partners like Didi adopt them too. After retreating from markets like China in exchange for a percentage of ownership of the local leader, there’s more pressure on Uber to squash its homeland competitor Lyft, which has been gaining market share. Yet neither has offered an oft-requested feature some users would even be willing to pay an extra dollar for: a “quiet ride” where the driver doesn’t make small talk.