Here is what you should take away from the state of the global venture capital market: late-stage deals dominated Q2.

Using projected data provided by Crunchbase, Crunchbase News reported that Q2 2018 marks new post-dot com highs for both VC deal and dollar volume around the world, the latter of which was propelled by a surge in late-stage deals (Series C and above).

The chart below plots growth in projected late-stage deal and dollar volume over time. 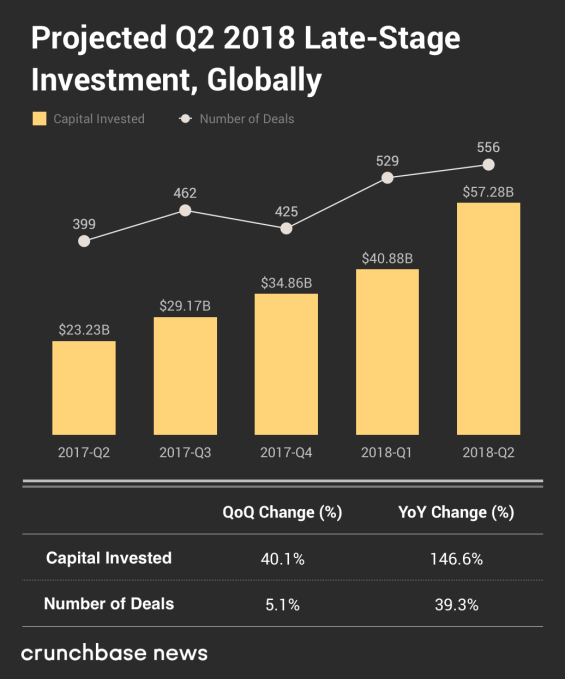 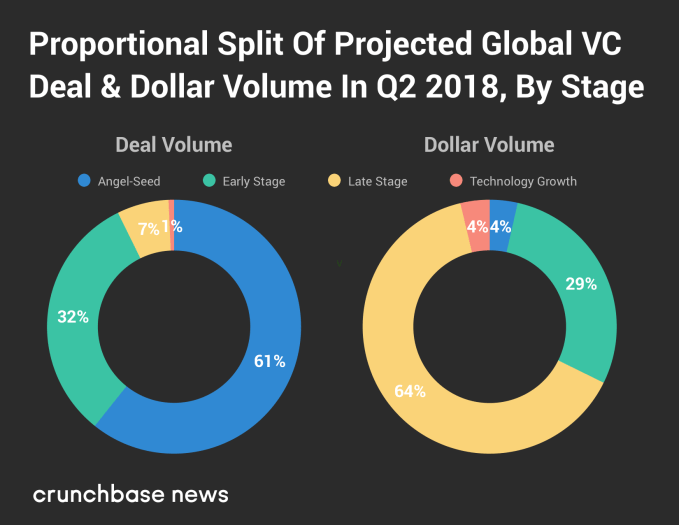 To be clear, this isn’t a rising tide raising all ships. Worldwide, late-stage venture activity is intensifying at a more rapid clip than other venture funding stages, squeezing other stages toward the margins. We can see this happening in the chart below: 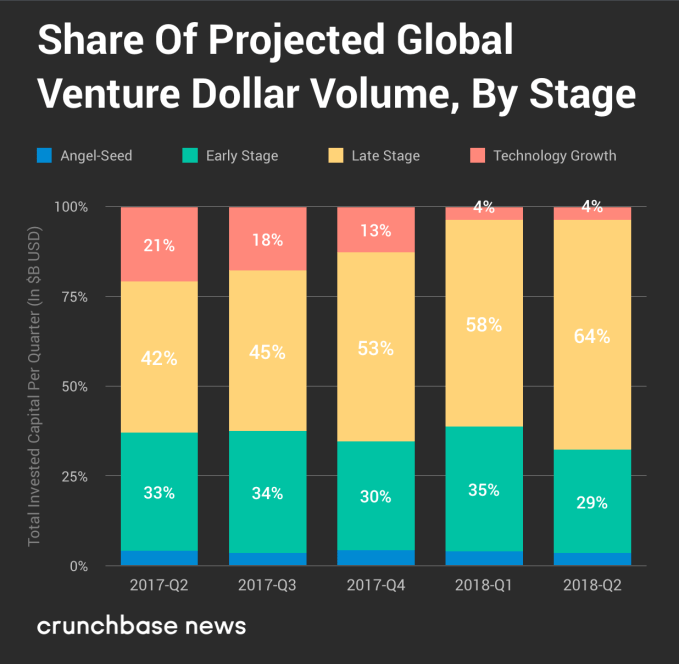 Two things are happening at once here: On one side, private equity deals with previously venture-backed companies — what we call “Tech Growth” — account for less of the action; on the other side of the spectrum, angels, seed investors and writers of Series A and Series B checks account for less of the total dollar volume over time.

As it happens, in Q2 seed and early-stage venture — despite reaching post-dot com highs in absolute terms — make up for a smaller percent of total dollar volume than in any quarter since at least Q3 2013, the last records we had readily available.

In the second quarter, seed and early-stage venture lost ground in relative terms, making up a smaller percent of total dollar volume than in any quarter since at least Q3 2013, the last for which records were available.

Private equity, on the other hand, is getting squeezed out because a certain class of venture capital firms are able to invest more capital into late-stage venture deals.

In part, this pivot to larger funds is a strategic countermeasure against SoftBank and its behemoth $100 billion Vision Fund. The fund routinely leads (sometimes as the sole investor) late-stage venture capital rounds sized in the hundreds of millions of dollars.

In order to compete with SoftBank for the best deals, many VC firms are raising big new funds. Capital pools earmarked for late-stage deals are growing deeper. Sequoia Capital’s third Global Growth Fund is expected to top out at $8 billion, whereas its second (announced in June 2017) was a comparatively paltry $2 billion.

So is there an end in sight for all this late-stage largesse? For the time being, not really.