It claims the compact, desktop machine — called OLO — which analyzes single-use cartridges manually loaded with drops of the patient’s blood, can deliver “lab-grade” complete blood count (CBC) tests from only a finger prick of blood.

The idea being for clinicians to use the device to perform the most prevalent medical blood diagnostics test directly in their office, rather than a patient having venous blood drawn and sent away to a lab for analysis — a process that can take a few days.

They’re also intending to offer a high tech alternative to carrying out manual microscopy on a blood smear — another technique that can be used to conduct an point-of-care CBC test, but which requires specialist personnel taking the time, care and attention to get it right.

The team hasn’t previously disclosed total funding but are now confirming they’ve raised $25 million in equity financing (Series A and B) from VC firms, including Eric Schmidt’s Innovation Endeavors — which they say they’re expecting to take them through their US clinical trials. They are also in the process of raising a Series C.

Sight Diagnostics is touting OLO as the high tech alternative that healthcare providers have been waiting for — with AI-powered analysis performing a blood count right then and there, after a healthcare worker has pipetted a few drops of the patient’s blood into place. 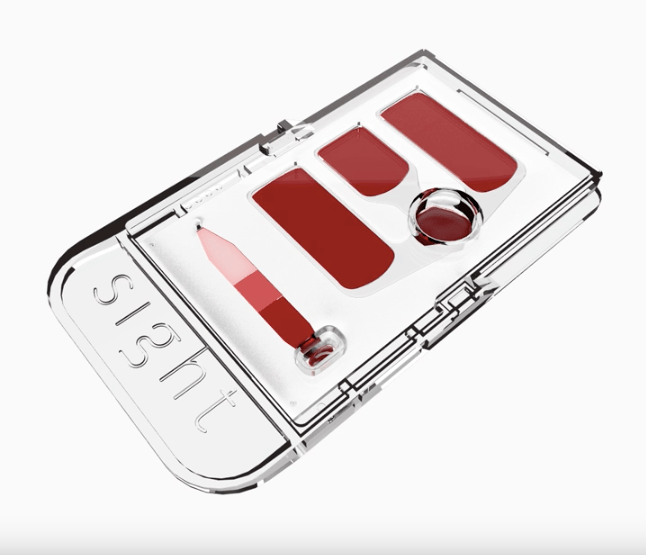 Sight Diagnostics points out that CBC tests are used to diagnose a broad range of common medical conditions, as well as for the vast majority of baseline tests ordered during routine ‘well visits’, arguing that speeding up this type of routine blood test could support faster diagnostics of medical problems. Or, indeed, speedier reassurance that a person is okay.

The OLO system uses a patented process for ‘digitizing’ patient blood into a set of specifically colored microscope images. It then applies proprietary machine vision algorithms to the images to identify and count different blood-cell types — with the company claiming its technology simplifies blood testing so that even non-professionals can perform the tests.

According to the company, new sample-preparation methods allow them to present a small amount of blood to OLO’s microscope in a way that is tolerant to inaccuracies in the preparation process — placing what they describe as “minimal burden” on the user — as well as being robust in the face of inaccuracies in any manufacturing processes, saying this means the cost of their testing kits can remain low.

“This novel way of digitizing blood is equally important to our approach as the artificial intelligence driving the analysis,” they add.

Of course any novel blood testing technology claiming a disruptive advantage must be able to prove it is as accurate and robust as traditional lab testing methods.

Very clearly, lives are at stake.

And, well, on the disruptive startup side, the shadow cast by Theranos’ implosion is a very long one.

But — to be clear — Theranos had claimed it could deliver a full battery of laboratory tests from a few drops of blood — not just a CBC count, which is at least the initial aim for OLO. And for CBC tests having only a small blood sample to work is actually not so unusual.

“CBC tests operate even today with low sample volumes,” it says. “For example, several central-lab instruments have been cleared for capillary samples (200-300uL of blood, of which less than 10uL is actually counted), and the older manual method for CBC analysis — the traditional blood smears on microscope slides — uses less than 10uL of blood in total. This is to say that in our domain the use of low sample-volumes stands on solid scientific ground.”

Sight Diagnostics has been working on the OLO system for more than eight years at this stage.

The co-founder duo — Yossi Pollak and Daniel Levner — combine machine vision and AI expertise on the one hand (Pollak worked on algorithms for automotive machine-vision giant Mobileye), with a medical background, via Levner’s postdoctoral fellowship at Harvard Medical School (and later a CTO role at a biotech company, called Emulate).

Their key claim is that OLO produces “lab-quality” CBCs.

Here’s what Levner — who’s also chairman of its scientific advisory board — told us on that:

To ascertain what quality of results was necessary to declare OLO equivalent to the Sysmex XN, we relied on values that we discussed with the FDA in our three pre-submission meetings. We applied these quality targets to our recent clinical study despite the CE Mark not sharing the same stringent requirements as the FDA, and we found that we surpassed the targets. Accordingly, we believe that our data supports the claim that OLO is equivalent to standard central-lab tests, which is our goal: testing at the point-of-care without compromising accuracy or depth of information.

As Levner notes there, they have completed a 287 person clinical trial, which took place at Israel’s Shaare Zedek Medical Center — a testing process that led to them obtaining CE Mark registration for OLO; aka the health & safety certification that’s necessary for commercial sale within certain European countries.

One important point to flag is that Sight Diagnostics has not yet published peer reviewed results of any of its clinical trials for OLO.

But Levner says the results of its most recent clinical trial (testing OLO as a CBC analyzer) are “currently in preparation” for publication in a peer-reviewed journal.

“We strongly believe in the necessity of sharing our data this way, but unfortunately and as you know, the process of publishing in academic journals tends to take several months,” he says, offering to share the results under a confidentiality agreement “so as not to scoop our own publication”.

Nor is OLO the team’s first blood diagnostic test. Previously they developed a diagnostic test for malaria (called Parasight), using digital fluorescent microscopy and computer vision algorithms — and they have three published journal articles that describe clinical trials on their malaria test.

Parasight was first deployed in 2014, and they say more than 600,000 of the malaria tests have been sold to date — claiming they have “accurately and consistently” diagnosed malaria in 25 countries.

Levner says the malaria test used the same underlying technologies they are now redeploying for OLO — including “common sample-preparation methods, microscope design, and artificial-intelligence based algorithms”.

While malaria testing was their first focus, they’re looking to build a far more expansive point-of-care blood diagnostics business with OLO — beginning with CBC testing but envisaging the system as a platform that will, in time, be capable of running a portfolio of blood tests.

Although on this Levner is careful to note that each additional test would be added individually — and after “independent clinical validation”.

“We see OLO eventually consolidating a number of tests that are important to the doctor’s office and becoming a diagnostics nerve-center for the clinic,” he tells TechCrunch, adding: “We will introduce these additional tests one-by-one, with each test undergoing independent clinical validation.”

Sight Diagnostics is starting by selling OLO in Europe, with both private doctors’ offices and national health services in its sights. Levner says they’re expecting the device to be in doctors’ offices in the EU in “around three months” — noting they’re in the process of finishing up a couple of initial distribution agreements now.

“Ultimately, we intend to distribute OLO in all of Europe and beyond. However, we are prioritizing European countries that are known for being early adopters — for example, countries without a single-payer system or ones with a well-developed private market,” he adds.

He also confirms OLO has been registered in the EU using a Netherlands-based CE Notified Body.

“We are also pursuing several more national registrations that don’t require additional testing, such as Switzerland and Israel, which otherwise accept the CE Mark.”

The team is also conducting a study as part of FDA testing in the US — with a trial ongoing at three US-based sites. They’re aiming to admit more than 500 participants, and are using eight different OLO instruments for testing.

The initial push is to obtain 510(k) approval from the FDA, which would allow OLO to be used in larger US-based clinics (CLIA certified facilities). Levner says they hope to gain that approval “midway through next year”.

The subsequence step would be to obtain a CLIA waiver from the FDA — which would permit it to place instruments in small clinics and doctor’s offices — necessary to the stated goal of “bringing blood diagnostics to the point-of-care”. And the hope is they obtain that waiver in 2020. Though clearly there’s a long way to go to pass all the necessary clinical regulatory hurdles.

In addition to the co-founders, Levner says the team includes a number of medical, diagnostics and regulatory experts — naming Dr Shai Izraeli (Hematology-Oncology) and Janice Hogan (who he says has previously developed regulatory strategy for hematology analyzers) — as well as several diagnostics-industry experts he says he’s not currently at liberty to disclose.

He also says they recruited “renowned hematology experts” to lead their CBC clinical trials — naming one: Dr Carlo Brugnara, the director of the Hematology Lab at the Boston Children’s Hospital, who they quote in their press release, talking up the challenges for physicians of having to wait for blood test results, and saying: “Previous blood analyzers aimed at in-office testing have involved clinical compromises and are difficult to operate or maintain. OLO has the potential to deliver on the promise of accurate, comprehensive blood testing at the doctor’s office, even with a finger prick sample.”

Nearly half a petabyte of blood image data — sourced from Sight Diagnostics’ own clinical studies over the past four years — has been used to train the AIs powering the OLO blood diagnostics system. (Levner specifies this data “has been anonymized and used in accordance with ethical review (IRB) approvals from their respective clinical institutions”.)

While most of the additional tests they’re envisaging bringing to OLO in future would use the same single-use consumable model as the CBC test, he mentions a subset of tests they’ve been considering which could benefit from sending information digitally to a different facility. “As one example, imagine that OLO is used to run a CBC for a patient, and an important finding is identified. In the future, the physician could order a follow-on test and have the already digitized blood images streamed to an expert,” he suggests. “The expert (or even multiple experts) could then analyze images remotely, saving the patient additional blood draws or travel.”

So while the initial business model is a traditional sales model — with Sight Diagnostics selling the OLO system plus as many test kits as required, and CBC tests taking place fully onboard the system, with no need for the device to connect to its servers — down the line, should all go to plan, there could be scope to bolt on a SaaS platform element. Such as for enabling clinicians to order additional follow on analyses, and with OLO streaming digitized blood images to remote experts.

So if their technology is as accurate and robust as they claim, a lot more could flow from just a few drops of digitized blood.