Facebook continues to expand its VR ambitions in the Pacific Northwest. The company has been quietly growing its footprint 16 miles East of Seattle, in Microsoft’s backyard.

A new analysis by real estate resource BuildZoom sheds additional light on the Menlo Park-based company’s efforts to build a satellite virtual reality HQ in and around Seattle. Over the last three years, Facebook has spent $106 million on construction and development permits for Oculus offices in Redmond.

In 2018 alone, Facebook spent $88.3 million on Oculus-related permits for as many as eight new offices in the area. BuildZoom’s analysis identifies five properties in particular, all on Willow Road in Redmond, that span more than 90,000 square feet of lab and office space. Those locations are 10545 Willows Rd., 10785 Willows Rd., 9805 Willows Rd., 9845 Willows Rd. and 9461 Willow Road. 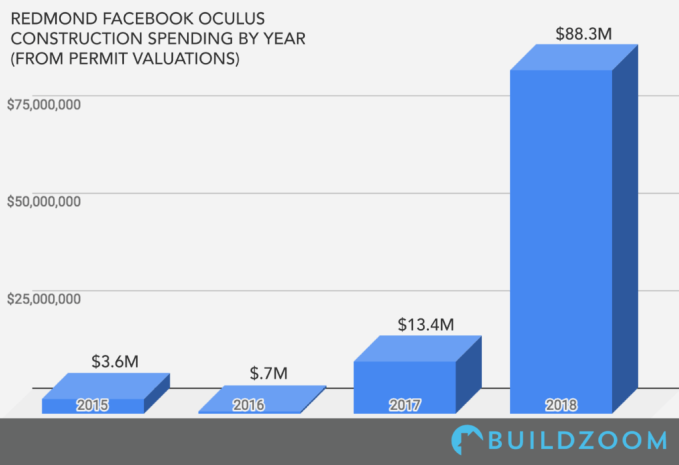 Last November, Seattle-based news site GeekWire reported that Facebook was on the hunt for 200,000 square feet worth of R&D space in Redmond, to expand its existing Oculus research efforts there. At the time, Oculus listed more than 60 job positions in Redmond in additional to a smaller amount of hiring for its Oculus operations in Seattle proper. Oculus is currently hiring for 121 positions in Redmond, with 42 of them in research. TechCrunch reached out to Facebook about its plans for the new Oculus offices but the company declined to comment. Late last year, an Oculus spokesperson told TechCrunch that the company is growing its Seattle team to achieve its goal to “get 1 billion people into VR.” This May, Oculus announced that its Oculus Research division would be rebranded as Facebook Reality Labs.

The growing Oculus offices join nearby Valve, Microsoft’s HoloLens and other VR operations nearby to cement Seattle as one of tech’s major VR hubs beyond Silicon Valley.