WhatsApp just introduced a new feature designed to help its users identify the origin of information that they receive in the messaging app. For the first time, a forwarded WhatsApp message will include an indicator that marks it as forwarded. It’s a small shift for the messaging platform, but potentially one that could make a big difference in the way people transmit information, especially dubious viral content, over the app.

The newest version of WhatsApp includes the feature, which marks forwarded messages in subtle but still hard to miss italicized text above the content of a message. 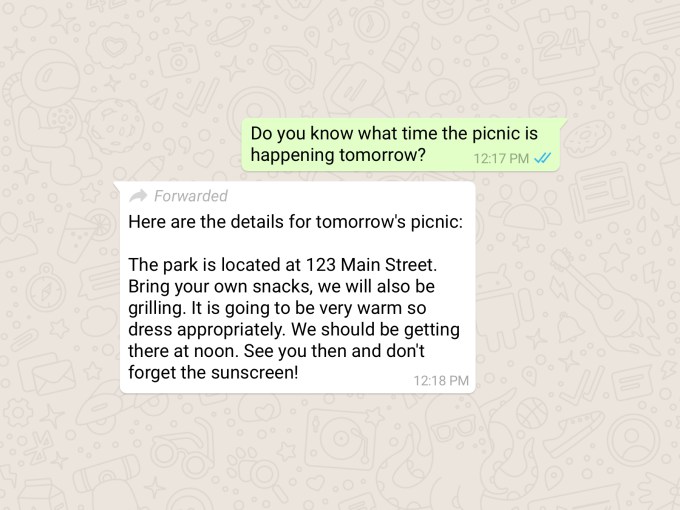 The forwarded message designation is meant as a measure to control the spread of viral misinformation in countries like India, where the company has 200 million users. Misinformation spread through the app has been linked to the mob killing of multiple men who were targeted by false rumors accusing them of kidnapping children. Those rumors are believed to have spread through Facebook and WhatsApp. To that end, Facebook-owned WhatsApp bought full page ads in major Indian newspapers to raise awareness about the perils of spreading misinformation.

Instances of lynching of innocent people have been noticed recently because of large number of irresponsible and explosive messages filled with rumours and provocation are being circulated on WhatsApp. The unfortunate killing in many states such as Assam, Maharashtra, Karnataka, Tripura and west Bengals are deeply painful and regretable.

While the Law and order machinery is taking steps to apprehend the culprits, the abuse of platform like WhatsApp for repeated circulation of such provocative content are equally a matter of deep concern. The Ministry of Electronics and Information Technology has taken serious note of these irresponsible messages and their circulation in such platforms. Deep disapproval of such developments has been conveyed to the senior management of the WhatsApp and they have been advised that necessary remedial measures should be taken to prevent  proliferation of  these  fake  and at times motivated/sensational messages. The Government has also directed that spread of such messages should be immediately contained through the application of appropriate technology.

It has also been pointed out that such platform cannot evade accountability and responsibility specially when good technological inventions are abused by some miscreants who resort to provocative messages which lead to spread of violence.

The Government has also conveyed in no uncertain terms that WhatsApp must take immediate action to end this menace and ensure that their platform is not used for such malafide activities.

In a blog post accompanying the new message feature, WhatsApp encouraged its users to stop and think before sharing a forwarded message.