Piece by piece Snap is trying to eek a developer platform out of Snapchat Lenses and give users something extra at the same time.

Today, we’re seeing the most user-facing of these efforts as Snapchat debuts a new Lens Explorer section which will give the user base greater access to scouting out new face filters beyond what’s sitting in the oft-refreshed Lens Carousel on the app’s central camera screen. The new update will be rolling out to iOS users slowly, the company says.

There are 70 million daily active users of Snapchat Lenses (more than one-third of total Snapchat DAUs) who spend an average of about three minutes playing around with them per day but up until now discoverability hasn’t been too extensive. 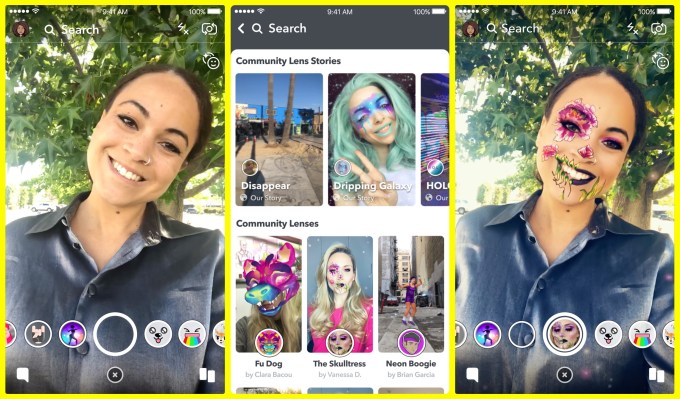 It’s honestly pretty surprising that its taken so long for Snapchat to gain this type of discovery feature, Lenses have long been a distinguishing feature of the platform though Facebook has been aiming to catch up with their own efforts. Why now after all this time? Well, Snap is likely hoping for a bit more of an influx of Lenses now that they’ve begun more heavily building up feature functionality in its Lens Studio software for third-party devs to create their own filters based on Snap’s face-tracking tech.

The company says that over 100,000 Lens filters have been submitted since the launch of Lens Studio and that these creations have been seen some 2.5 billion times by users as they explore. While many of these have undoubtedly been Sponsored Lenses — Snap’s own unique AR ad product — these filters will not be found in the Explorer section at launch, with the hub sticking to the freebies for the time being.

In the long-game as Snap looks to own their revamped vision at a bona fide camera company, something like Lens Explorer may offer a novel way to stack AR functionality into the app’s camera, allowing users to curate what sort of augmented reality functionality they want their device to have. Users can shop for what functionality they might like and the camera could have those abilities readily available. As the company looks at e-commerce and gaming verticals, it’s clear that there could be much more to their future plans than selfie filters alone.