YouTube announced new measures today to stem the spread of conspiracy theory videos and fake news on its platform, including inserting context from trustworthy sources into search results about hot topics. In a blog post, YouTube also said it is working with the Google News Initiative, which was launched by its parent company earlier this year to support journalists and publishers.

This includes earmarking $25 million in Google News Initiative funding to create a working group of news organizations and media experts that will advise YouTube on new features. Members already include Vox Media, Brazilian radio station Jovem Pan and India Today, with more to be added in the coming weeks. Part of the funding will also be used for grants that will be awarded to news organizations through an application process to help them train staff and build their video production capabilities. The money will also be used on expanding the YouTube team that works with news publishers.

YouTube has been blamed for the proliferation of conspiracy theories about historical topics including the moon landing and news events like the 2016 presidential election and Sandy Hook and Parkland, Florida school shootings, with its search and recommendation algorithms cited in particular for pushing problematic videos to more viewers. In March, YouTube CEO Susan Wojcicki promised new features to make YouTube a more reliable source of information during a South by Southwest panel, stating that “this has been a year of fake news and misinformation and we have seen the importance of delivering information to our users accurately.”

Similar to Facebook’s attempts to fight fake news by adding information about publishers and articles to News Feed, YouTube said it is will add context to search results about breaking news topics to help people quickly see if a video is from a trustworthy source. Search results will also include linked previews of news articles, since journalists usually write about breaking news first before producing more labor-intensive videos, and reminders that information about developing events can change quickly. 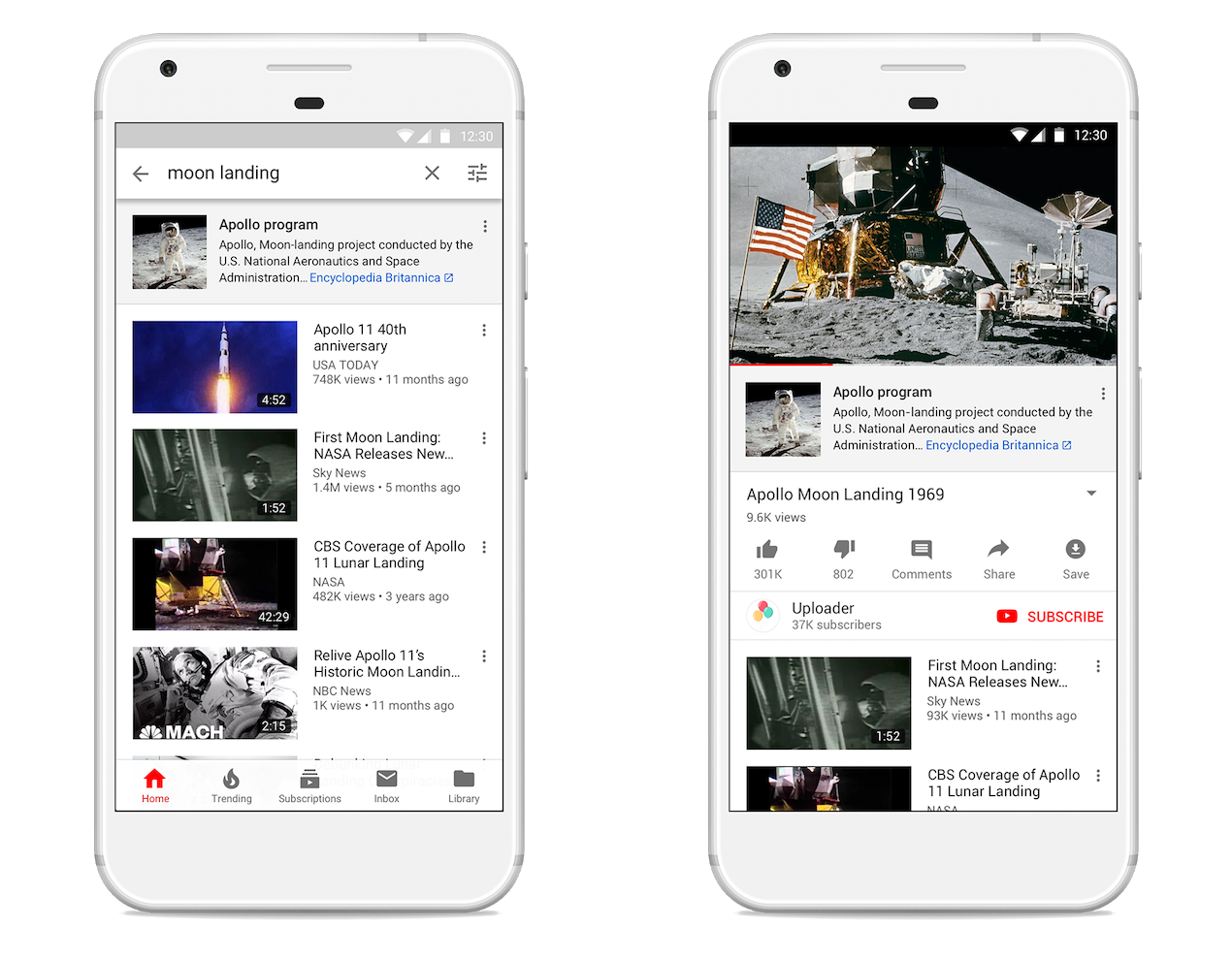 To combat conspiracy theories, YouTube will start displaying information from third-party sources like Wikipedia and Encyclopedia Britannica next to videos about “well-established historical and scientific topics that have often been subject to misinformation,” including the Oklahoma City bombing and the moon landing.

Other new features include ones that will surface local news in the YouTube app for TV screens across 25 American media markets and the addition of Top News and Breaking News shelves (the row of videos users see at the top of their screens) that will highlight videos from news organizations on YouTube’s homepage. The Top News and Breaking News features are already available in 17 countries, including the U.S., the U.K., France, Italy, Japan, India, Mexico, Brazil, South Africa and Nigeria. YouTube says that number will double in the coming months.

The platform is also supporting MediaWise, a non-profit led by the Poynter Institute to help teens develop media and online awareness, and working with six YouTube Creators popular with young audiences, including John Green, Ingrid Nilsen and Mark Watson “to bring awareness to digital literacy and help educate teens.”