Grab may have bought itself a dominant position in Southeast Asia through its acquisition of Uber’s regional business, but the company still believes there’s competition in the ride-hailing space despite what consumers may feel.

But Grab customers aren’t alone in feeling that the Grab-Uber deal is detrimental, the Competition and Consumer Commission Singapore (CCCS) last week expressed concern that the tie-up is hurting consumers and that a lack of competition will reduce innovation. The watchdog is in the process of an investigation into the deal which could see it dish out fines for Uber and Grab, or potentially unwind the deal in Singapore altogether.

Despite that threat looming, Grab co-founder Hooi Ling Tan told an audience at the Rise conference in Hong Kong that the market, and ride-hailing more generally, remains competitive in Southeast Asia despite Uber’s exit.

Go-Jek, the billion-dollar firm that dominates Indonesia and is plotting a regional expansion to fill Uber’s void, may be the most obvious rival, but Tan said that Grab is competing with more basic forces.

“From day one, our primary competitor has never been other ride-hailing apps, it’s actually been what [Grab CEO Anthony Tan] calls the hand — the hand that waves down a taxi on the side of the road,” Tan, who is not related to the Grab CEO, said. “That market is huge, [and it is something] we’re trying to provide an alternative service to because it isn’t exactly efficient as is.” 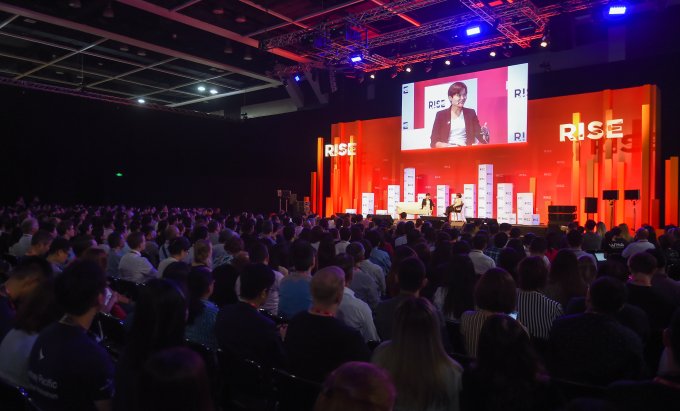 CCCS, the Singaporean watchdog, doesn’t agree, however. Last week it expressed concern that no other taxi apps rival Grab and that a prohibitive barrier of cost and network effects prevents new entrants from competing squarely. A lack of competition has already led to Grab raising prices, it argued, although Grab has denied doing so.

Tan didn’t comment directly on the regulator’s comments, but she did say at a subsequent press briefing that regulating ride-hailing is a tricky process.

“We’re all trying to figure out what’s the right way to balance the needs of the consumer and need to create an environment that’s supportive of innovation,” she said. “Together we’re trying to figure things out, we make mistakes together but are 100 percent combined in terms of our intent.”

An entity with which Grab is more unexpectedly combined with is Uber, and Tan’s comments certainly paint the relationship between the once-sworn enemies as a very pally one.

“The partnership makes a tonne of sense to us because we saw [Uber] as really true potential partners,” Tan said. “For example some of the things that they’ve been helping us a lot on… they have Uber Eats in Southeast Asia, which we didn’t have, and since we’ve helped take over their operations we’ve helped them expand it from two countries to six countries right now with a bunch more growth expansion plans.

“They’ve also had some of the best technology know-how, whether it’s mapping or just basic scaling infrastructure, those are some of the other things we’ve continued learned from them,” she added.

Tan said that Uber and Grab are educating each other on how their respective businesses are developing, and on that note Grab today went beyond ride-hailing with the launch of its “super app” that integrates third-party services. Uber has embraced scooters with its acquisition of Jump Bikes, but it will take some imagining for the ride-hailing giant to adopt non-transportation services like Grab’s push into payment and financial services.

But then that’s entirely the point of its Southeast Asia exit. It’s widely believed that Uber left Southeast Asia’s loss-making market to clean its balance sheet ahead of a future IPO. Nonetheless, it got a solid 27.5 percent share in Grab in return and with the Singapore-based firm in the process of raising capital at a valuation of over $10 billion, Uber is already reaping the rewards on paper.

Grab raised $1 billion from Toyota last month and that is the first tranche of a larger fundraising effort to support the one-stop “super app” strategy in Southeast Asia’s post-Uber world.