Bots, your days of tweeting politically divisive nonsense might be numbered. The Washington Post reported Friday that in the last few months Twitter has aggressively suspended accounts in an effort to stem the spread of disinformation running rampant on its platform.

The Washington Post reports that Twitter suspended as many as 70 million accounts between May and June of this year, with no signs of slowing down in July. According to data obtained by the Post, the platform suspended 13 million accounts during a weeklong spike of bot banning activity in mid-May.

Sources tell the Post that the uptick in suspensions is tied to the company’s efforts to comply with scrutiny from the congressional investigation into Russian disinformation on social platforms. The report adds that Twitter investigates bots and other fake accounts through an internal project known as “Operation Megaphone” through which it buys suspicious accounts and then investigates their connections.

Twitter declined to provide additional information about The Washington Post report, but pointed us to a blog post from last week in which it disclosed other numbers related to its bot-hunting efforts. In May of 2018, Twitter identified more than 9.9 million suspicious accounts — triple its efforts in late 2017. 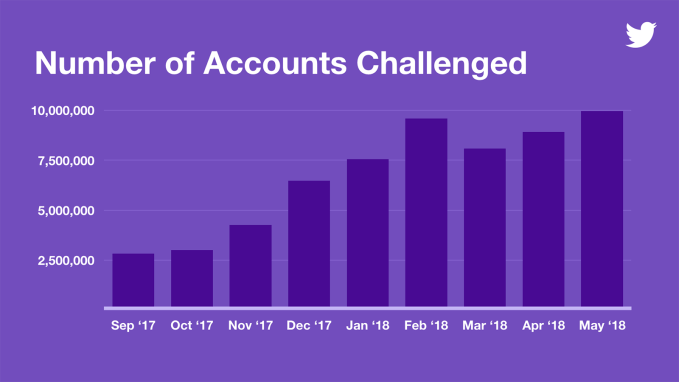 When Twitter identifies an account that it deems suspicious, it then “challenges” that account, giving legitimate Twitter users an opportunity to prove their sentience by confirming a phone number. When an account fails this test it gets the boot, while accounts that pass are reinstated.

“As a result of these improvements, some people may notice their own account metrics change more regularly,” Twitter warned. The company noted that cracking down on fake accounts means that “malicious actors” won’t be able to promote their own content and accounts as easily by inflating their own numbers. Kicking users off a platform, fake or not, is a risk for a company that regularly reports its monthly active users, though only a temporary one.

As the report notes, at least one insider expects Twitter’s Q2 active user numbers to dip, reflecting its shift in enforcement. Still, any temporary user number setback would prove nominal for a platform that should focus on healthy user growth. Facebook is facing a similar reckoning as a result of the Russian bot scandal, as the company anticipates user engagement stats to dip as it moves to emphasize quality user experiences over juiced-up quarterly numbers. In both cases, it’s a worthy trade-off.