It was already known that Facebook had set up a group within the company to “explore” blockchain tech, headed up by long time Messenger chief David Marcus. However, the latest executive reshuffle appears to point to the social networking behemoth getting more serious about developing on top of blockchain technology.

According to his LinkedIn profile, Evan Cheng, a director of engineering at Facebook, has moved to the position of Director of Engineering, Blockchain. A well-respected “low level” computer engineer, he was previously responsible for heading up Programming Languages & Runtimes at the company, a position he held for nearly three years. 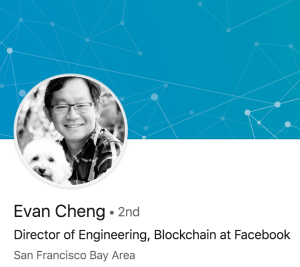 Prior to that, Cheng spent nearly ten years working at Apple, most recently holding the position of Senior Manager, Low Level Tools. He also worked on compilation technology and other back end engineering.

He also tweets about blockchain and is reportedly an advisor to a number of blockchain startups/projects, including Zilliqa and ChainLink.

“It means it’s not just an exploratory project,” is how one source who tracks the blockchain space speculatively framed Cheng’s move to Facebook’s blockchain team. His reasoning was that in recruiting Cheng (who knows more than a thing or two about performance and scalability) to the blockchain group, it signals the importance of the project.

Meanwhile, Marcus and Cheng aren’t the only Facebook execs to be have been tasked with building out the social network’s burgeoning blockchain work. In a recent executive reshuffle, we reported that Instagram’s former VP of Product Kevin Weil has taken up the position of VP of Product, Blockchain at Facebook. See TechCrunch’s in-depth analysis of those moves and how Facebook could utilise blockchain.