Spotify is the latest tech company to join the ‘Lite’ app party after a data-friendly version of its music streaming app surfaced for Android devices.

‘Spotify Lite’ — which was first spotted by the eagle eyes at Android Police — is designed to take up less space on smartphones and to consume less data, too. That’s particularly important for cheaper smartphones, which tend to have less memory, and people who use metered mobile data. In that respect, the app is just 15MB in size, as opposed to 100MB for the main Spotify app, while it also tracks the amount of data the app uses each month.

However, like most things in life, there’s a compromise here… although we can’t quite be sure exactly what. That’s because the app is being trialed in Brazil only — tough luck if you live elsewhere and want to get it — although Android Police got hold of an SDK, which it said shows the app is devoid of some key features. That apparently includes — or, rather, doesn’t include — offline playback and Spotify Connect for streaming to other devices. It looks like Lite app users can’t select specific songs and must instead rely on the shuffle button, even if they are a Spotify Premium subscriber. 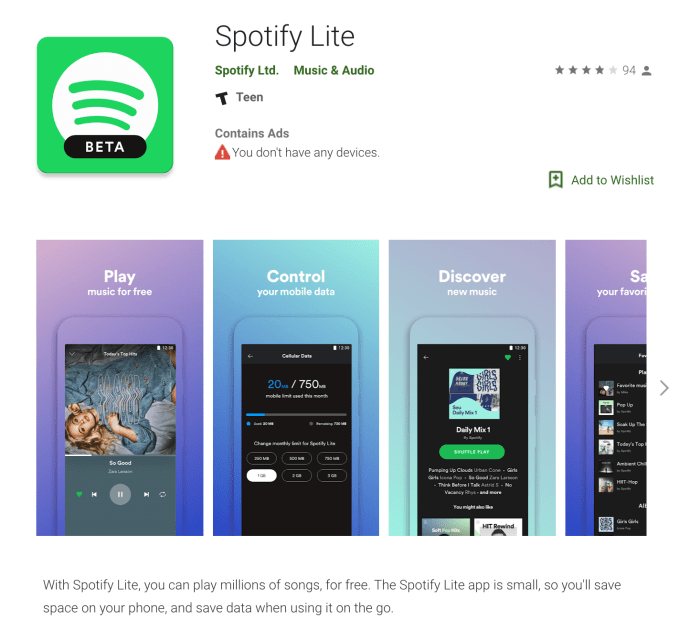 Of course, the app is in beta right now so that list of missing features may change as/when it gets a full worldwide release. For now, app tracking firm Sensor Tower suggests Spotify Lite has racked up just 4,000 downloads, so this is very much a test deployment.

“At Spotify, we routinely conduct a number of tests in an effort to improve our user experience. Some of those tests end up paving the path for our broader user experience and others serve only as an important learning. We aren’t going to comment on specific tests at this time,” a spokesperson told TechCrunch.

The company has tested other apps on Android in the past, like Spotify Hopper back in 2016, and more recently, a pared-down radio app called Spotify Stations.

Spotify Lite isn’t the first time Spotify has helped its users save on data consumption. The company added a low-data mode to its service in April as part of a wider product launch focused on bringing more value to its free-tier users. The Lite app could add another element to attract more users, giving Spotify an additional competitive advantage over rivals like Apple Music and Pandora.