Following last week’s launch of its low-cost streaming TV service, Watch TV, AT&T is now raising prices on its original over-the-top offering, DirecTV Now, by $5 per month. That means instead of starting at $35 per month for its basic “Live a Little” tier with 60+ channels, the new service will start at $40 per month. The other tiers are going up by $5 per month, as well.

The news was first spotted by Cord Cutters News over the weekend. There was also a discussion of the price changes occurring on Reddit.

While there are concerns about AT&T’s price hikes elsewhere in its business, it’s not the first TV streaming service to raise its prices in recent months. YouTube TV also upped the cost of its service by $5/month, going from $35/month to $40/month back in March. And only days ago, Dish’s Sling TV revamped its service with a price change of its own, going up $5/month to $25/month instead of $20/month for its base package without add-ons.

Meanwhile, $40/month is in line with Sony’s PlayStation Vue’s least expensive plan as well as with Hulu’s Live TV service.

AT&T attributed its decision to these shifts in the market for streaming TV.

“In the 18 months since our launch, we have continued to evolve our DirecTV Now products to serve this new customer set and compare favorably with our competitors. To continue delivering the best possible streaming experience for both new and existing customers, we’re bringing the cost of this service in line with the market—which starts at a $40 price point,” a spokesperson said.

The changes were announced via email to existing subscribers, and may see some of DirecTV Now’s early adopters fleeing, as a result. Commenters on Reddit complained about the quality of AT&T’s service, including issues with its streams and DVR, for example. Others, meanwhile, felt that AT&T’s channel lineup was still a good value for the money, even with the increase. 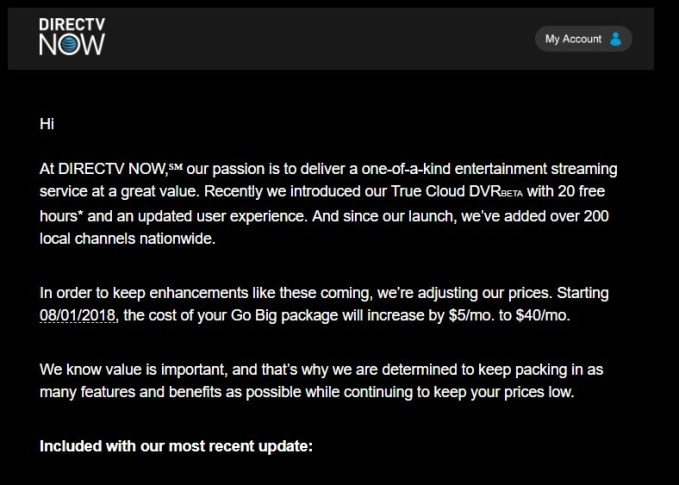 As a result of price hike, there are now few services left offering low-cost streaming TV. Sling TV, even at now $25/month remains one of the most affordable, along with AT&T’s far more limited Watch TV, and Philo’s $16/month service lacking sports and locals.

The new prices will go into effect on July 26 for new customers based on their billing date, AT&T tells us.