Amazon’s Prime Day, the company’s annual sales event that’s now its biggest, will be held this year on July 16, starting at 12 PM PT/3 PM ET, and will feature over a million deals, the retailer announced today. One big change this time around is the event’s length — last year, Prime Day ran 30 hours, but this year’s event will run for 36 hours. In addition to being the longest Prime Day to date, the event will also expand to new markets this year, says Amazon.

Of course, Amazon will again mark down its own devices for Prime Day, and it’s teasing some of its deals in advance. The retailer says it will offer “double the deals” on Amazon devices, including the lowest prices to date on Echo, Fire TV and Fire tablets.

The expanded number of deals comes from Amazon now owning more hardware brands. For example, it acquired the smart doorbell maker Ring earlier this year, and the smart camera and doorbell startup Blink back in December. Today, it’s selling a suite of home security products that includes these brands and others, like its own Echo Dot and Amazon Cloud Cam.

These could be the “home security devices” that will be newly on sale this year during Prime Day, alongside the Echo Show.

Prime members shopping in-store can take an additional 10 percent off hundreds of sales items and will receive other deep discounts on popular products, Amazon says. Plus Prime Rewards Visa card members will receive double the rewards — 10 percent back — July 14 through 17 when shopping Whole Foods.

In addition to the usual slate of deals, some brands are unveiling new products, new content or special edition products for Prime Day 2018. 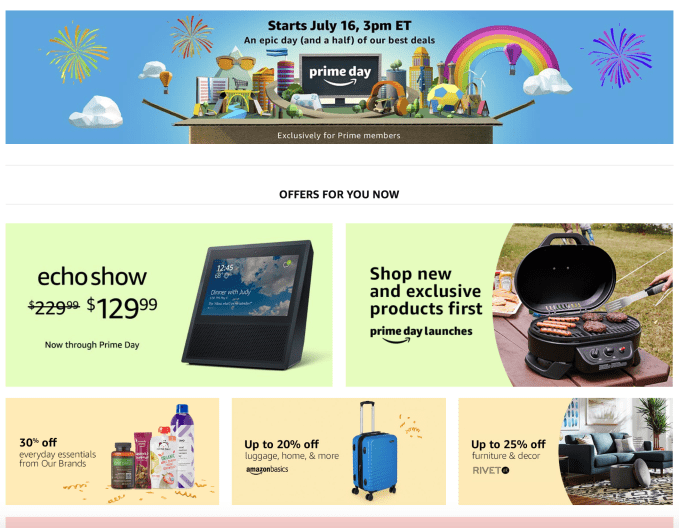 Amazon is kicking off the Prime Day deals starting immediately, however.

The following items are already on sale:

During Prime Day, Amazon is adding 50 percent more Spotlight Deals, and will feature deals across the following: Watch a Deal (deal notifications from the Amazon app); Prime Day Sneak Peek (sneak peek at deals in the app from July 9-15); deals by Popular Interests (deals organized by 40 of the most shopped interests); Alexa Shopping (ask Alexa for deals); Amazon Prime Credit Cards (5 percent back on Prime Day purchases). 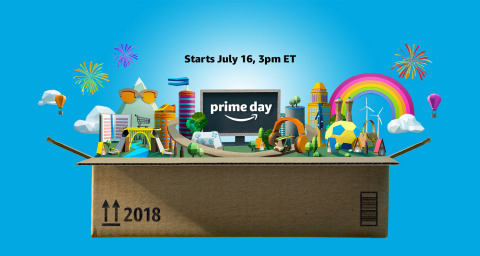 To encourage Alexa shopping this year, Amazon is offering customers a chance to win a sweepstakes where a grand prize winner will get an Alexa-enabled 2019 Lexus ES, a complete Alexa smart home package and more. This is a big step up from the Alexa shopping perks from last year, which included $10 for first-time Alexa voice shoppers.

Prime Day began as a way to drive more consumers to subscribe to Amazon’s annual Prime membership program, which now has more than 100 million paid members. However, because of the numerous deals available, it’s also become a sales event that outpaces Black Friday, Cyber Monday and other sales holidays for Amazon. Prime Day 2017, for example, was the biggest sales day in history for Amazon, up 60 percent from the year before.

With Amazon doubling down on the event this time around, with even more device deals, Whole Foods deals, market expansions and longer hours, it will likely break records again.