MongoDB‘s Atlas service has been giving companies a managed database service in the cloud for some time. Mongo deals with all the heavy lifting behind the scenes, relieving the developer of creating it all themselves. Today the company announced it was taking that a step further by allowing customers to have granular control over where the data lives, with a new feature called Global Clusters.

This allows companies to choose a cloud provider, then move to any location in the world data from a MongoDB database running in Atlas. As MongoDB CTO and co-founder Eliot Horowitz explained, it doesn’t matter who the cloud provider is, you can set a data location policy, select a cloud vendor and data center location and see what the results will look like on a graphical representation of the world map. When you give the OK, Mongo moves the data automatically for you in the background without shutting anything down to do it. 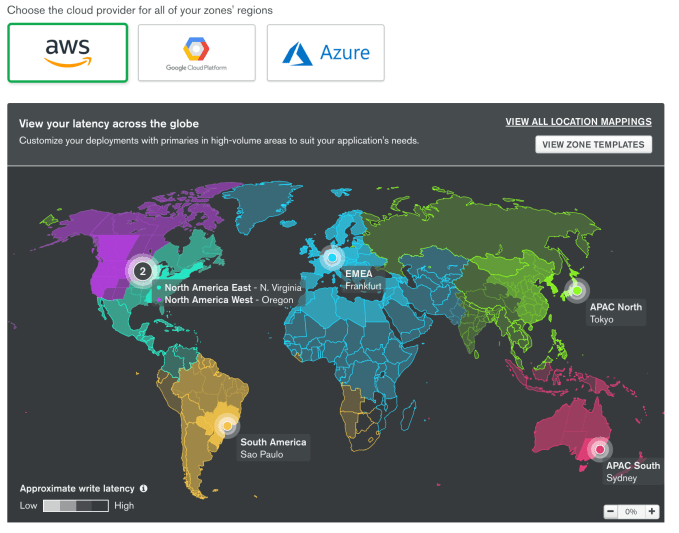 Lots of countries are requiring proof of data sovereignty, including the EU’s GDPR rules that went into effect last month. It has been challenging for many businesses to comply with these kinds of rules on their own. Horowitz said he created geographic partitions before Atlas and it required a tremendous amount of engineering effort. By providing it as a service in this fashion, the company is putting this kind of data migration in the hands of the smallest business owners, giving them that geographic granularity from the start.

“I think what you’re going to see is a lot of [small businesses], who feel they can now compete with some of the larger websites and actually have that high level of service on day one, rather than having to wait to hire a team of engineers.”

The beauty of this approach from Mongo’s perspective is that they don’t even have to worry about building a worldwide data center presence of their own. Instead, they simply piggyback on the global locations of each of the main public cloud providers, AWS, Microsoft and Google.

“The cool thing is that those data centers come from any of the cloud providers. So you can actually do this on any cloud provider that you want in any region [they support],” he said.

This feature will be available starting today for all Atlas users.