Don’t want to know the ending to a World Cup game or Avengers movie until you’ve watched it, or just need to quiet an exhausting political topic like “Trump”? Facebook is now testing the option to “snooze” specific keywords so you won’t see them for 30 days in News Feed or Groups. The feature is rolling out to a small percentage of users today. It could make people both more comfortable browsing the social network when they’re trying to avoid something, and not feel guilty posting about sensitive topics.

The feature was first spotted in the Facebook app’s code by Chris Messina on Sunday, who told TechCrunch he found a string for “snooze keywords for 30 days.” We reached out to Facebook on Monday, which didn’t initially respond, but last night provided details we could publish at 5am this morning ahead of an official announcement later today. The test follows the rollout of snoozing people, Pages and Groups from last December. 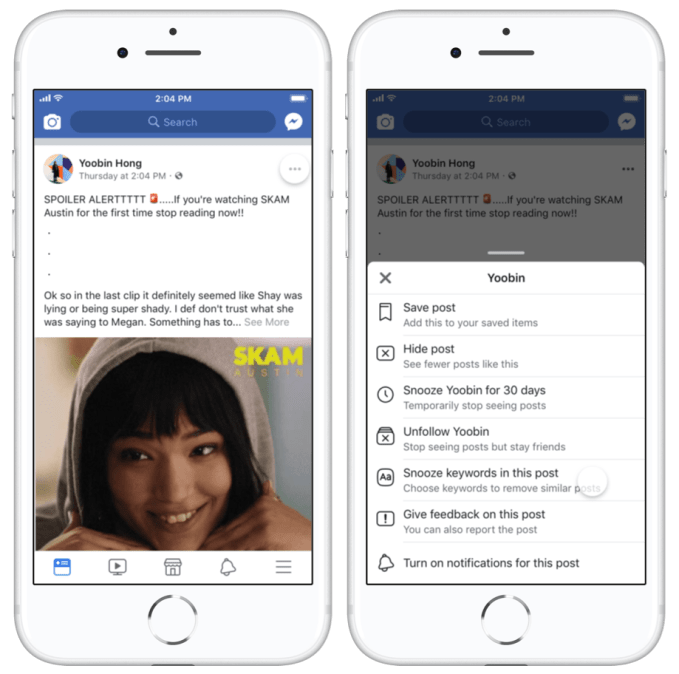 To snooze a keyword, you first have to find a post that includes it. That kind of defeats the whole purpose, as you might run into the spoiler you didn’t want to see. But when asked about that problem, a Facebook spokesperson told me the company is looking into adding a preemptive snooze option in the next few weeks, potentially in News Feed Preferences. It’s also considering a recurring snooze list so you could easily re-enable hiding your favorite sports team before any game you’ll have to watch on delay.

For now, though, when you see the word, you can hit the drop-down arrow on the post, which will reveal an option to “snooze keywords in this post.” Tapping that reveals a list of nouns from the post you might want to nix, without common words like “the” in the way. So if you used the feature on a post that said “England won its World Cup game against Tunisia! Yes!” the feature would pull out “World Cup,” “England,” and “Tunisia.” Select all that you want to snooze, and posts containing them will be hidden for a month. Currently, the feature only works on text, not images, and won’t suggest synonyms you might want to snooze as well.

The spokesperson says the feature “was something that kept coming up” in Facebook interviews with users. The option applies to any organic content, but you can’t block ads with it, so if you snoozed “Deadpool” you wouldn’t see posts from friends about the movie but still might see ads to buy tickets. Facebook’s excuse for this is that ads belong to “a separate team, separate algorithm,” but surely it just doesn’t want to open itself up to users mass-blocking its revenue driver. The spokesperson also said that snoozing isn’t currently being used for other content and ad targeting purposes. 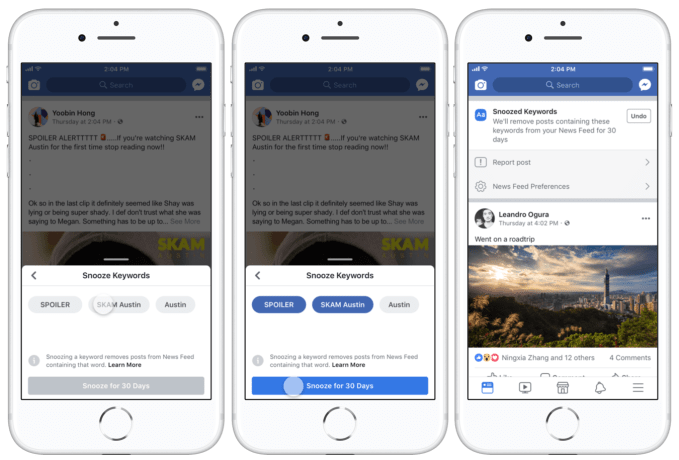 We asked why users can’t permanently mute keywords like Twitter launched in November 2016, or the way Instagram launched keyword blocking for your posts’ comments in September 2016. Facebook says, “If we’re hearing from people that they want more or less time,” that might get added as the feature rolls out beyond a test. There is some sense to defaulting to only temporary muting, as users might simply forget they blocked their favorite sports team before a big game, and then wouldn’t see it mentioned forever after.

But when it comes to abuse, permanent muting is something Facebook really should offer. Instead, it’s relied on users flagging abuse like racial slurs, and it recently revealed its content moderation guidelines. Some topics that are fine for others could be tough for certain people to see, though, and helping users prevent trauma probably deserves to be prioritized above stopping reality TV spoilers.