As companies get bigger and bigger, all the critical information about a company — even its mission and culture statements — can get lost in a massive pile of Google Docs or files strewn across dozens of collaboration tools, making it nearly impossible to find. That’s where the team behind EveryTeam hopes to step in and clean things up.

EveryTeam serves as a sort of hub for all of the documents and core information about a company — a kind of living library that adapts over time and can easily suck in new information as it comes about. The idea is that employees might not necessarily be going to the same internal portal for that information, or might not be updating that portal, and the information continues to sit across multiple different buckets within a company. The company came about from former GitHubbers Todd Berman, Connor Sears, and Scott Goldman, which are looking to bring that same level of collaboration and simplicity to access to internal employee information. The startup said it has raised $3 million in a seed round from Harrison Metal, Upside Partnership, Index Ventures and Greylock Partners.

“People end up creating content in them but struggling to maintain content in these [internal communications] tools,” CEO Todd Berman said. “Whether they’re using a combination of Google Docs, or Dropbox Paper, or Confluence, there’s tons of people trying to do a lot of different things here. A lot of these tools are focused on the creation, where people felt there was a lot of opportunity. But for our potential customers, the issue is that their content is all over the place. it’s not in one spot.” 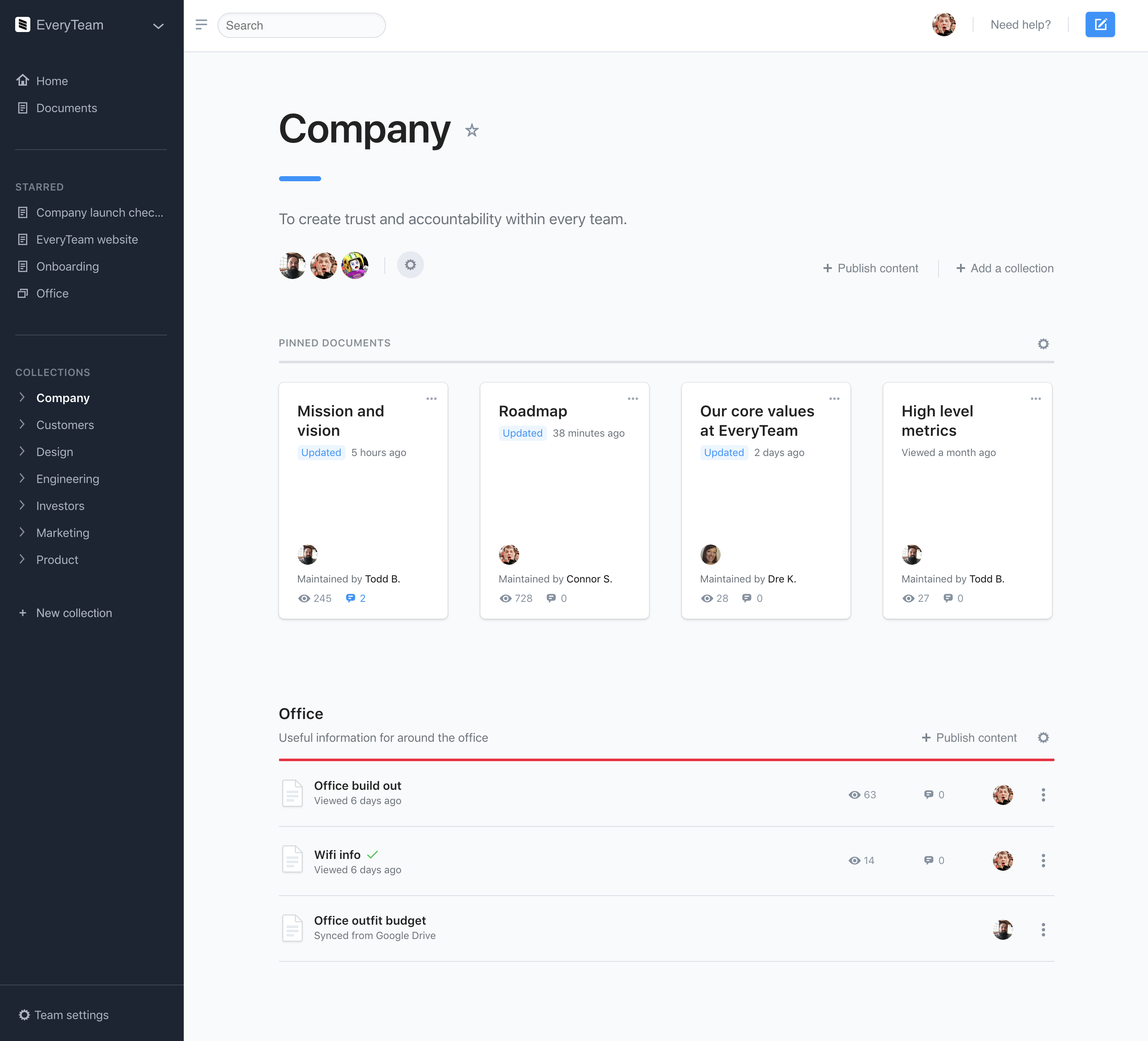 EveryTeam works to surface up those kinds of critical employee documents that are probably fine to just exist in some Google Drive somewhere very early on — which might include the information for the WiFi or the schedule for office snacks. But as more and more docs flow in, EveryTeam has to parse through all of those and ensure that the right important ones are surfaced up in front of everyone, especially as they become more and more important over time. For larger and large companies, that content management can get out of control and devolve into a lot of messages across the organization just to find a single document. EveryTeam integrates with GitHub, Google Drive, Dropbox, Figma, and Airtable among others.

“It ends up looking in a lot of cases like how GitHub works — GitHub is a tool to maintain, curate and publish software. You’re publishing source code, but a lot of the workflows feel very natural and feel very similar. Ultimately, where we ended up from a product perspective is, it’s more about being a layer on top of these services [like Box] to provide a plane of organization.”

EveryTeam isn’t the only startup looking to rethink the internal employee wiki. Slite, another startup looking to create an intelligent internal notes tool that can serve as a hub of information for employees, also said it raised $4.4 million earlier this year. The idea there is to bring the Slack-like simplicity that has become popular among employees — at least, at the startup level — to a variety of different areas that haven’t changed in a while. Internal note-taking, and that Wiki functionality, is one. EveryTeam decided to work with the idea that content is just going to exist all over the place anyway, and try to fit into the employee workflow that way.

“You want to curate and expose content that exists in ten to 12 different tools you use every day,” Berman said. “Ultimately, that’s part of my day-to-day flow. I’m usually in four to five web apps. When [some tools] take the Slack model they often get very focused on recency, and that determines an arbiter of value.[You have to think], what is the desire path for a document that becomes load-bearing in the company. It starts off a little weird, people edit it, it ideates and matures, and it stands the test of time. How do you create an application that helps that happen.”