Apple News has a new old mission: Curating political news and analysis by paying a team of experienced human editors to quality-assess journalism, rather than letting unchecked algorithms run wild and exaggerate anything — no matter how awful, obnoxious or untrue.

‘Fakebook’ eat your heart out.

Apple says human curation is not a new direction for Apple News — describing it as a “guiding principle” across the product since it launched three years ago.

Although it certainly wasn’t shouting so loudly about it back then when algorithmic feeds were still riding high. But the company says Apple News has always had a team of editors — which it says are focused on “discovering and spotlighting well-sourced fact-based stories to provide readers with relevant, reliable news and information from a wide range of publishers”.

Those “experienced” editors are also now being put to work assessing political reportage and commentary around the US midterms. With only publishers they deem to be “reliable” getting to be political sources for Apple News.

The launch is focused on the US 2018 midterm elections, at least initially, which will get a dedicated section in the product — providing what Cupertino bills as “timely, trustworthy midterm election information” along with “the most important reporting and analysis from a diverse set of publishers”.

We’ve asked the company whether it plans to expand the Apple News election section approach to other markets.

“Today more than ever people want information from reliable sources, especially when it comes to making voting decisions,” said Lauren Kern, editor-in-chief of Apple News, in a statement. “An election is not just a contest; it should raise conversations and spark national discourse. By presenting quality news from trustworthy sources and curating a diverse range of opinions, Apple News aims to be a responsible steward of those conversations and help readers understand the candidates and the issues.” 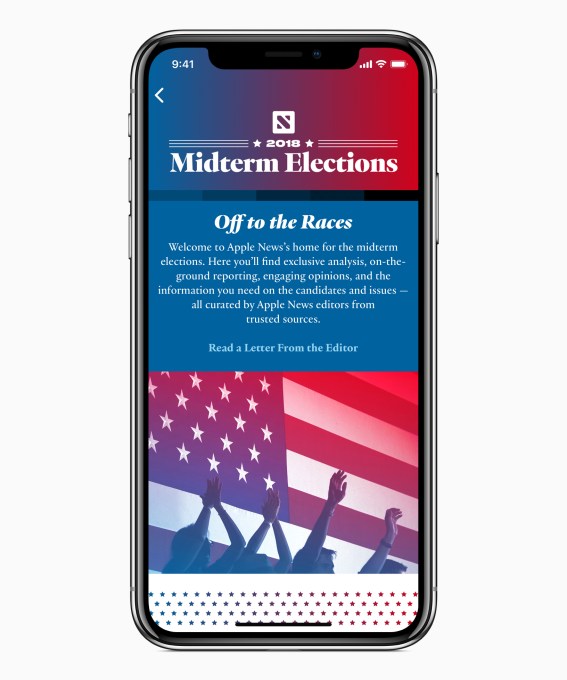 Apple is clearly keen to avoid accusations of political bias — hence stressing the section will include a “diverse range of opinions”, with content being sourced from the likes of Fox News, Vox, the Washington Post, Politico and Axios, plus other unnamed publishers.

Though there will equally clearly be portions of the political spectrum who decry Apple News’ political output as biased against them — and thus akin to political censorship.

Safe to say, don’t expect Breitbart to be a fan. But as any journalist worth their salt will tell you, you can’t please all the people all of the time. And not trying to do so is essentially a founding tenet of the profession. It’s also why algorithms suck at being editors.

The launch of a dedicated section for an election event within Apple’s news product is clearly a response to major failures where tech platforms have intersected with political events — at least where business models rely on fencing content at vast scale and thus favor algorithmic curation (with all the resulting clickbaity, democracy-eroding pitfalls that flow from that).

Concern about algorithmic impacts on democratic processes continues to preoccupy politicians and regulators in the US and beyond. And while it’s fair to say that multiple tech platforms have a fake news and political polarization problem, Facebook has been carrying the biggest can here, given how extensively Kremlin agents owned its platform during the 2016 US presidential elections.

Since then the company has announced a raft of changes intended to combat this type of content — including systems to verify political advertisers; working with third party fact checkers; closing scores of suspect accounts around elections; and de-emphasizing news generally in its News Feed in favor of friends’ based updates which are harder for malicious agents to game at scale.

But its core algorithmic approach to programming the hierarchies of content on its platform has not changed.

And while it’s ramping up the number of content moderation and safety staff on its books — saying it will have 20,000 people working on that by the end of this year — that’s still reactive content assessment; which is the polar opposite of editorial selection and curation.

So Apple evidently sees an opportunity for its News product to step in and fill the trust gap with reliable political information.

As well as general news and commentary from the selected trusted publishers, Apple says it will also include “special features with stories curated by Apple News editors from trusted publishers”, including opinion columns “about hot-button issues that are intended to offer readers a full range of ideas and debate about important subjects, from news sources they may not already follow” (so it’s also taking aim at algorithmically generated filter bubbles); and an election dashboard from the Washington Post — which contextualizes “key data like current polling, what pundits are saying and survey data on voter enthusiasm”.

Local news is another focus for the section, with a feature that aims to highlight “quality reporting about issues that matter to local constituents on the most important races”.

The 2018 Midterm Elections section is available to Apple News users in the US from now until November.